“All American”: A City Divided

The third season of "All American" continues to showcase a suspenseful society while highlighting social issues along the way. 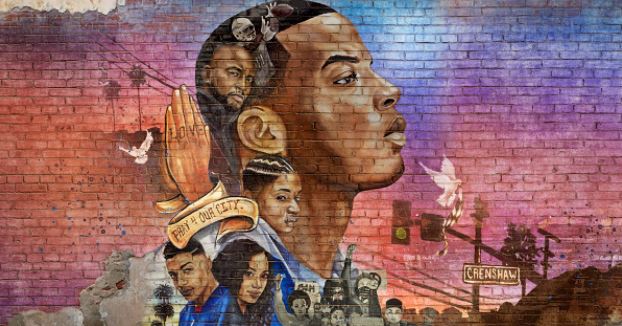 A mural of the show "All American" displays the divide between two cities and the protests for racial justice. Although these issues were covered in Season 2, they have only been briefly touched on so far in Season 3. It is important that these issues are expanded on in the storyline.

With Season 3 of “All American” being released a couple of weeks ago, fans are already raving over the events that have just gone down. “All American” is a show that encompasses the life of Spencer James, a football star at Crenshaw Highschool in Los Angeles. Spencer soon finds a new life in Beverly Hills as he is recruited by their high school’s football program. He faces many struggles along the way but he also makes new friends that accompany him on his journey through high school.

The show is framed in various storylines relating to the main character. From plot twists to suspense, each minute of the show is filled with drama. The biggest reason for the popularity for this show is the unpredictability. Fans are on the edge of their seat while watching the show because the number of new characters introduced every episode means anything can happen.

The show has also effectively highlighted the contrast in lifestyle between Crenshaw and Beverely while still emphasizing the similar issues that hit both communities. However, I believe Season 3 could be more focused on addressing the needs of Spencer’s community as it relates to the poverty and inequality surrounding Crenshaw. For instance, the culture and storyline of gangs in the community could be expanded upon from Season 2 instead of continuing to address the possible relationships of new characters. I think some of the community’s concerns can be addressed by shining light on more real-life issues within the show.

This show has attempted to set a more serious tone given recent events concerning racial justice. Black Lives Matter protests were addressed and Spencer experienced racial profiling in Season 2. However, these issues have not been confronted yet in Season 3.

Still, it is easy to understand why this show is so popular among teens. Due to new characters forming relationships in each episode, the portrayal of social awkwardness and trying to fit in is exemplified throughout the show. Moreover, student athletes can relate to the impact of mental health in Spencer’s life. He suffers a serious injury and struggles to overcome mental hurdles in addition to regaining his physical strength.

Already one of the most popular shows on Netflix, “All American” spreads an important message while gaining the support of millions across this country. The combination of football, real-life issues, and the outlook of a concerned athlete makes this show a must-watch.