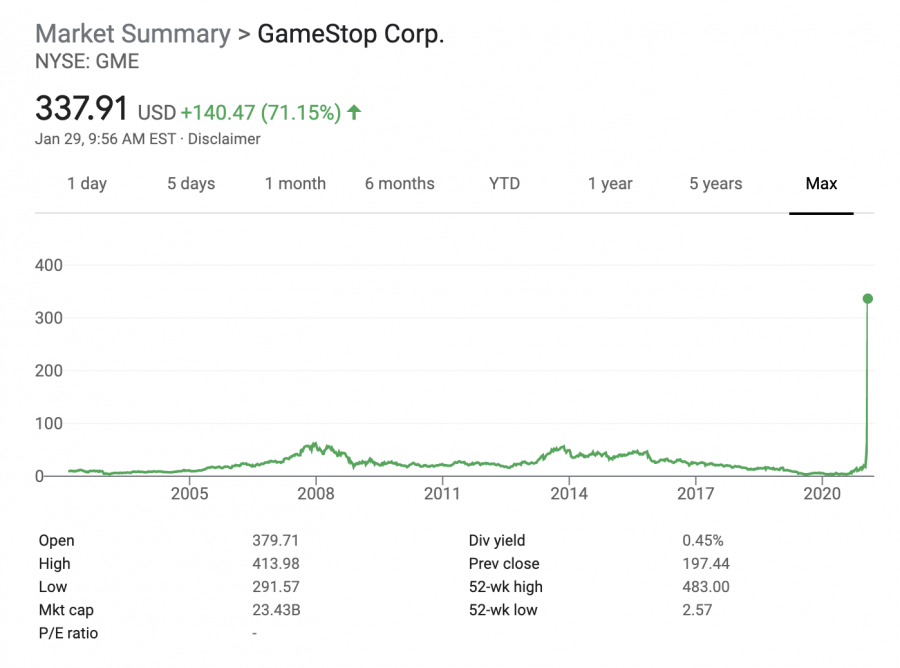 Thanks to thousands of Redditors suddenly investing in Gamestop, the company’s stock price absolutely exploded, surpassing the legendary Volkswagen spike of 2008 in sheer magnitude.

What happens when an online mob decides to take the matter of stocks into its own hands? The answer is absolute insanity. The collective force of millions of Internet users is something that cannot be ignored, and although the morals of such a population may be up in the air every now and then, this time they were firmly grounded. Some people, mainly rich stockbrokers, may say that it was irresponsible or unpleasant, but considering the circumstances, it was an impressive underdog feat.

To recap, starting on Jan 11, 2021, members of the online Reddit community WallStreetBets started to invest heavily in companies such as Gamestop and AMC to spite hedge funds making money off of shorting stock in those companies. Shorting is the practice of borrowing stock from lenders, selling the shares, making the stock value drop, then buying the shares back. Because the Reddit users in r/wallstreetbets made the value of the stocks skyrocket, the hedge funds were forced to buy more stocks, forcing the stock price up even higher. This is a phenomenon called a “short squeeze”, and its results are often quite impressive, like when Volkswagen very briefly became the most valuable company in the world in 2008.

As of January 31, GameStop’s stock has started falling back to its original price, but it seems that the people of r/wallstreetbets still have more tricks up their sleeves. Other volatile, often shorted stocks such as Nokia, Blackberry, and Express have been targeted by the community. Billionaire Mark Cuban commented that he believes that the surge of common people buying stock is “real,” and that the people have “recognized their power”. He even encouraged the people responsible to keep going.

Many users that took part in the scheme made thousands, or even millions, of dollars. This came at the cost of hedge funds losing a lot of money, but what of it? Shorting stock is often questionable in morality, as much of the practices are kept behind closed doors. The tactic is also extremely risky, especially if done without any shady manipulation of the stock market. Even so, it is destined to fail every once in a while, so why not at the hands of the general public? Why not let smaller investors reap some rewards?