“Nobody Is Listening”: Zayn provides a beautiful reminder of his ever changing artistic style 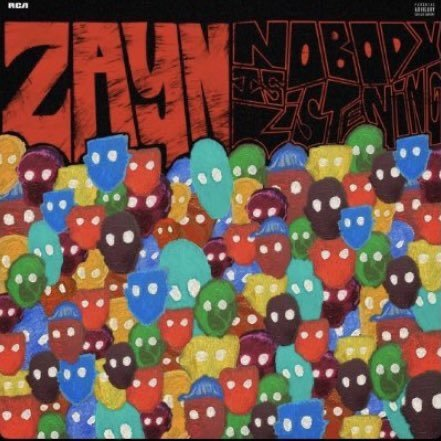 Courtesy of Beyond the Stage Magazine

Zayn announced that he would be releasing his third studio album “Nobody is Listening” on Jan. 15, 2021, ending his two-year hiatus. I have followed his journey as a solo artist ever since he left One Direction. Not to mention, his sophomore album “Icarus Falls” was one of my favorite albums of 2018. So, I had high expectations for the songs on his new album.

The eleven track-album represents a shift in Zayn’s music style and his life. Zayn and his long-time partner Gigi Hadid welcomed a baby girl in September, and “Nobody Is Listening” is the first full album he has released since the monumental occasion. Personally, it is difficult to understand the artistic direction Zayn is taking his music. His first studio album, “Mind of Mine,” was heavily EDM-based and hard-hitting, and his second studio album, “Icarus Falls,” was composed of romantic and calming ballads. I did not know what to expect with his third album.

Although most first-time parents write about the delicate feeling of first holding their newborn or the anxiety of being a parent, Zayn still reminds us that he is still the same artist from his One Direction days. The album kicks off with the song “Calamity,” and it was a stark difference from the typical pop or R&B album intro. The opening track is not a song; it is spoken word poetry. The lines and depth of the words slowly build-up to this beautiful crescendo, which sets the stage for the deep meaning and sincerity of the album. The second track is “Better,” and I could tell that this entire album would not mimic styles seen in mainstream pop at the moment. Chart-topping songs like Doja Cat’s “Say So,” Dua Lipa’s “Levitating,” and BTS’s “Dynamite” utilize the well-known retro sound in their instrumentals. Zayn experiments with guitar and lofi elements to create a bedroom pop sound that showcases his defined vocal range and power. With lyrics like “Oh, I say goodbye while it’s right // Can we save tears in your eyes I’m making you cry // Why wait to hate? Can we save love?”, “Better” is most likely about his partner, Hadid. The bittersweet lyrics ice the cake for this song; although it is not my favorite song off the album, it is quite different from what I hear on the mainstream radio.

The third track on his album is “Outside.” The tracklist has been a roller coaster in terms of the types of songs he has put forth so far. “Outside” perfectly captures the feeling of longing all of us have had during the COVID-19 pandemic. The minimalist backing instrumentals complement Zayn’s high-pitched voice to create a soothing track, further supported by the light snaps in the back. The backing instrumental reminds me of lofi and bedroom pop, in addition to the call and response technique resonating through the song. I enjoy how quiet the overall sound is, and it is my first favorite track on this album. The fourth track is “Vibez” with its night-time vibes and heavy synthetic bass during the chorus. This track has to be the most pop-like song on his entire album because it mimics his earlier style with the bass intertwining itself with his strong vocal presence on this track, which had been missing so far on the album. The chorus particularly caught my interest because of the quiet humming and powerful falsettos in the back. “Vibez” is one of my favorites on this album because of the strength of his vocal technique.

“When Love’s Around” is the fifth track off of the album “Nobody is Listening.” The song features Syd, an American singer and songwriter from Los Angeles. Throughout the chorus, there were captivating harmonies as Syd’s huskier yet higher voice and Zayn’s clearer golden voice matched together so well. However, the rest of the song did not catch much of my attention. The sixth and seventh tracks are “Connexion” and “Sweat, which are on the upbeat end of the spectrum for Zayn’s songs. “Connexion” is unique with the well-timed falsettos in the chorus and its jazz-like undertones. “Sweat” sounds like it belongs on the soundtrack for a movie because of its hard-hitting chorus that pays homage to Zayn’s earlier tracks like “PILLOWTALK.”

The ninth track on the album is “Windowsill.” Unlike his previous songs that feature his raw voice, “Windowsill” is heavy on autotune, which is the most noticeable during the chorus. The chorus is my favorite chorus on the entire album because of the instrumental accompaniment and the texture it adds to his voice. Zayn seems to distort his voice on purpose during the chorus. However, the distortion works wonderfully with the autotune. The light synthetic bass only adds to the laid-back feeling of the track. However, I was not a fan of Devlin’s rap because it came out of nowhere on the track. The contrast between Zayn’s voice is a dream-like clear voice and Devlin’s is a hard-hitting rap only detracting from the original beauty of the song.

The tenth track on the album is “Tightrope.” As soon as the song begins, the airy, fairy-like vibes with his hazy voice drew me in immediately. This song takes on elements very near and dear to my heart: Bollywood love ballads. Although the chorus is repetitive, the soft guitar instrumental backing brings the entire song together. The post-chorus features snippets of the song “Chaudhvin Ka Chand Ho” from the famous Indian singer Mohammed Rafi. The lyrics of the post-chorus are “चौदवीं का चाँद हो, या आफ़ताब हो? जो भी हो तुम खुदा कि क़सम, लाजवाब हो”, which translates to Are you the full moon or the sun? Whatever you are, I swear to God, you are beyond comparison. The light song is reminiscent of the tracks on “Icarus Falls.” The last track on “Nobody Is Listening” is “River Road” with a country-like melody. The last thing I was expecting was for Zayn to sing with a melody that seems to be inspired by country music. The despair and sadness in Zayn’s soft-spoken vocals are quite audible, and it serves as a painful reminder of those who have lost their loved ones during the COVID-19 pandemic.

Compared to his 29 track 2018 album “Icarus Falls” and 14 track 2016 album “Mind of Mine”, “Nobody is Listening” serves as a reminder of the ever-changing artistic style of Zayn while also providing the reassurance that he is the same artist that he was before.