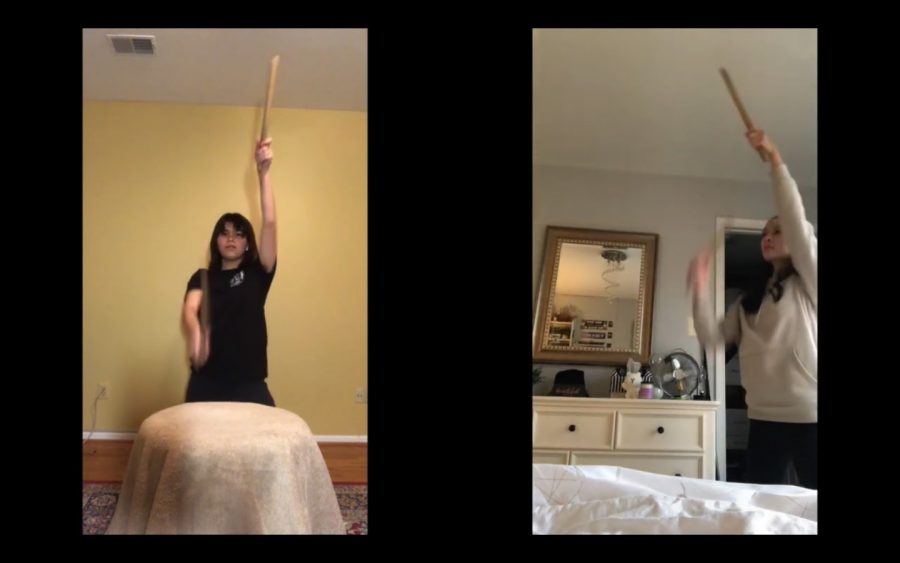 Japanese Culture Club members, senior Alana Nii (left) and junior Alyssa Rask (right), perform the Taiko drums synchronously. “Taiko has been prominent in Japan for centuries,” junior Alyssa Rask said. “It will be fun and educational for people to learn about it.”

The Japanese Culture Club (JCC) is hosting the Taiko video project to cultivate and teach an important performing art in Japanese culture. The Taiko video is a Japanese dance video to a background song called “Renshuu.”

“I hope people will have fun with the video,” co-leader of the JCC, junior Alyssa Rask said. “People can let go of their stress especially in the virtual world we are in.”

The idea for the dance was brought up in a Taiko group at Jefferson. The Taiko dance was originally planned for iNite, but was cancelled due to the COVID-19.

“I was pretty disappointed that iNite was not going to happen,” Rask said. “Now, we are holding virtual practices and making a video instead of a performance.”

Many members of the JCC see the Taiko video as a stepping stone in their exploration of Japanese culture. The assignment is intended for members to demonstrate their knowledge and skills in Japanese percussion.

“I want to help contribute to the Jefferson Japanese program,” senior Richik Haldar said. “This will help me promote the language and culture to the community.”

The JCC has had to adjust to the pandemic like many other clubs and the Taiko video is one example. Using Google Classroom as well as numerous social media platforms, the JCC leaders have kept the club active and engaging through many virtual meetings.

“Japanese Culture Club is a place where members can broaden their horizons and see the world from another perspective,” Rask said. “Our virtual practices and interactions are helping us maintain our goal.”

The Taiko video will be shown to its members during 8th period meetings next week and published on various platforms such as Facebook. The JCC hopes to reach other potential members in the process and gain a larger following.

“Not too many people in the Jefferson community know about the club,” Haldar said. “I hope the club is able to change that.”

The Taiko videos were collected on Jan. 22 and the JCC is planning to combine the videos into one collage.

“We are very excited about this video,” Rask said. “We hope we can still bring Taiko to Jefferson.”