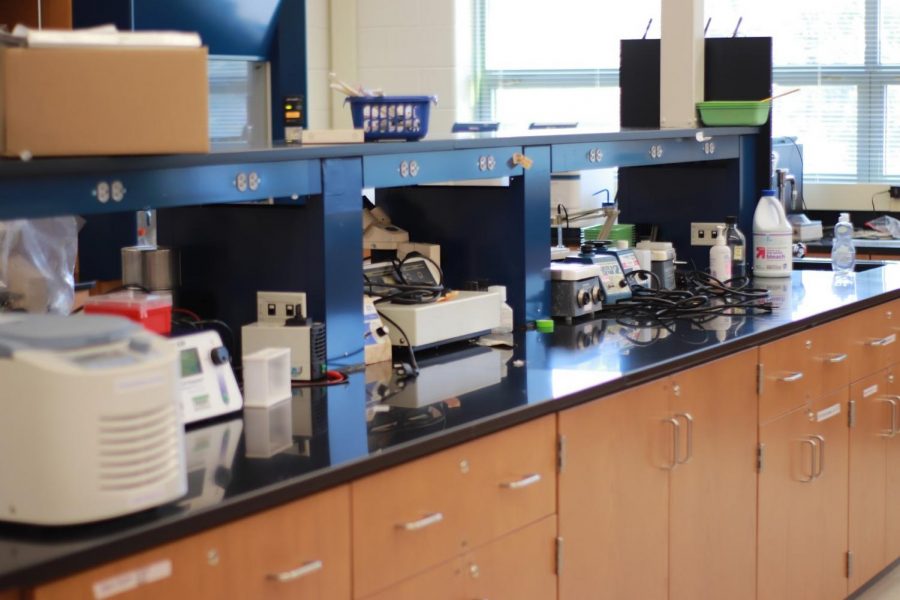 Once populated by a select group of students, the senior research labs are now empty for the time being. The future of in-person learning remains uncertain.

A nurse stands at the entrance of the school, waiting to check temperatures. Orange stickers on the ground spaced five feet apart show students where to stand. Inside the classroom, teachers sit behind panes of plexiglass.

This was the reality for seniors entering the building in order to conduct in-person research. Falling under the Group 4 category that FCPS had chosen to send back to school, Jefferson seniors in certain labs were able to return to the building. But three weeks after the labs opened, the return of Group 4 students was put on hold.

Many of the seniors found the short period that they were in the building surreal.

“It was really strange because obviously, it’s a familiar place. It’s where we’ve gone to school for the past three years, but it felt really foreign,” senior Oceanography student Shanti Fewell said.

Fewell belongs to one of the four labs that had the opportunity for in-person meetings: oceanography, astronomy, neuroscience, and computer systems. Along with many other ocean students, she had started entering the lab on a weekly basis to conduct research on sea life that wouldn’t be possible at home. Neuroscience students in a similar position also returned to do research on live organisms.

“My group wanted to do an experiment on flies, and I trusted that it was going to be safe so I decided to go,” senior Neuroscience student Meera Gupta said.

For those who wished to experiment on living specimens during their year-long research project, making the choice to go in-person was often a necessary one. While most Neuroscience and Oceanography students were in this position, students from the other two labs have their own reasons for attending in-person meetings.

“There are people working on physical projects,” senior Astronomy student Owen Grannis said. “There’s one group that is building a scale model of the solar system centered on the dome as the sun. Another is building a prototype of a Mars rover.”

However, some students chose to attend in-person labs while focusing on projects that were mainly computer-based.

“I’m not doing a project where it’s strictly necessary, but I am working with a partner,” Grannis said. “It is possible to do that virtually, but it becomes a lot easier if you’re actually physically there with the group.”

Yet on Nov. 23, in-person research at Jefferson came to an end for the time being. Although the cancellation was sudden, students were not surprised that FCPS recalled Group 4 students.

“I wasn’t expecting it to happen so soon, but I’m not surprised. I think it makes sense and that closing the labs was a responsible decision,” Fewell said.

“I kind of knew that there was a strong possibility because of the numbers,” assistant principal Volita Russell, one of the In-Person Transition Leads, said. “Student and staff safety is always number one.”

However, the Monday lab sessions provided a valuable learning experience for both the seniors and those in charge of organizing a schoolwide return.

“It was a springboard for planning, especially for transportation. The only thing we don’t know yet is lunch,” Russell said.

Although the future of in-person learning at Jefferson is uncertain, the lab sessions were the first foray into a controlled return to school.

“I’m glad [seniors] got a taste of being in the building senior year,” Russell said. “I think [seniors] will be back. For how long we’ll have to wait and see, but I’m pretty sure [they will] return.”