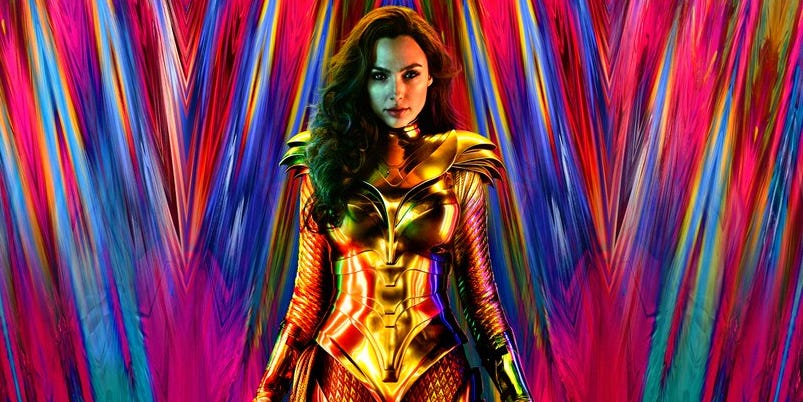 The poster for “Wonder Woman 1984,” starring Gal Gadot and available in theaters or HBO Max until Jan. 24.

“Wonder Woman 1984” is the highly anticipated action packed two and a half hour sequel to “Wonder Woman.” Starting from the ending scenes of the previous movie, this film follows Diana Prince in her daily life working at the Smithsonian National Museum for Natural History in the year 1984. A seemingly harmless artifact that is rumored to grant wishes has been discovered and Prince innocently wishes for her lover, Steve Trevor, to come back alive. This is when things get interesting.

Though viewers know that Trevor was killed in the previous movie, he comes back in the body of another person. After being  devastated by Trevor’s death, I was personally overjoyed to see his return in this movie. I found that the manner in which he was introduced and intertwined with the plot was not forced and added greatly to the movie. However, when Wonder Woman has to renounce her wish, thus returning Trevor to wherever he came from, there is no telling if he will play a part in the future movies.

Something that I really enjoyed in this movie was the multi-faceted personalities of the antagonists. The two villains, Maxwell Lord and Barbara Minerva, were well-developed characters whose motives were not intentionally evil. Abused and underprivileged as a child, all Lord wanted to do was become rich and famous. Minerva, on the other hand, was very shy and meek, admiring people who were strong and confident, like Prince. Both villains sought the possibilities that the wishstone provided but were too greedy in their endeavors thus losing themselves. It was refreshing to see the development and ultimate takedown of these villains, because backstories for these characters are typically reserved for comics or additional movies.

Overall, I really enjoyed this movie because it followed the previous one in a manner that did not make the storyline repetitive or lengthy, but original and complete . If future Wonder Woman movies are to come out, I am curious as to how writers plan to include Steve Trevor in the plot from here on, or if he will show up at all.