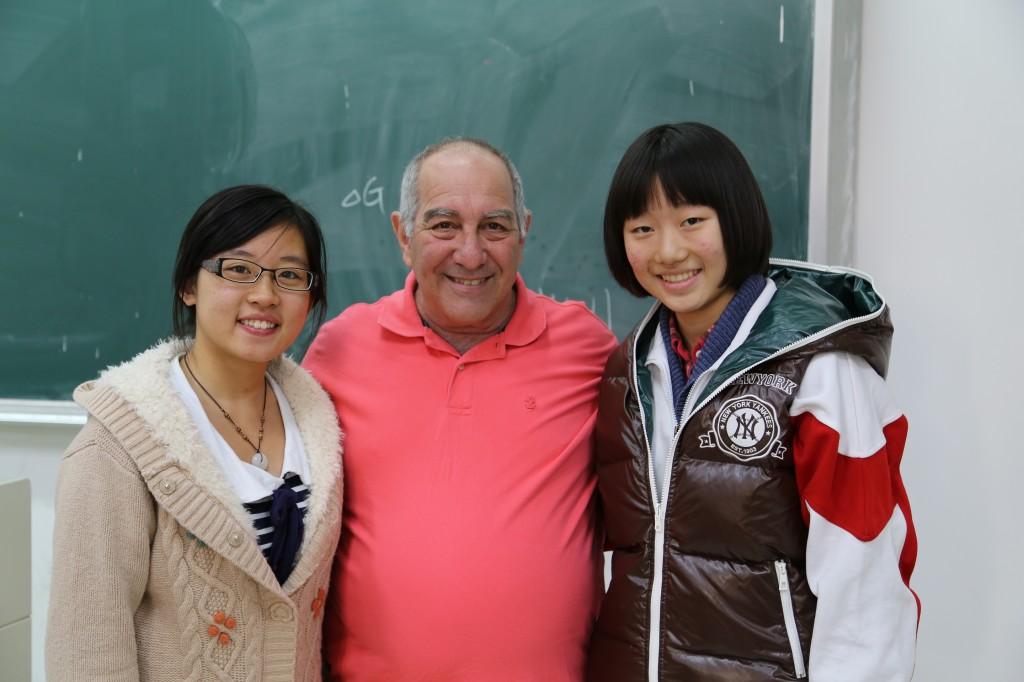 Cammer stands with Neuroscience club leaders after speaking to the club about music and the brain.

Students were greeted with a familiar face as former Neuroscience lab director Paul Cammer returned to Jefferson from Dec. 4 – 7.

Cammer had visited RDFZ, a High School Affiliated with Renmin University in Beijing, China, in July 2011 for a workshop on interactive teaching. He became acquainted with RDFZ administrators, who subsequently invited him to stay with them for a year.

“Everyone was excited by his ideas and instructional approach,” RDFZ English teacher Li Jing said. “He’s helping to shape  Chinese education by providing a new perspective.”

One issue Cammer is tackling is the lecture-based class system that is so prevalent at RDFZ.

“The students either listen or don’t listen; they either take notes or not. Teachers don’t interact much with the students,” he said.

According to Cammer, one of the barriers in the way of meaningful class discussions is the tendency of teachers at RDFZ to set themselves up as experts in their classes.

“They don’t ask questions they don’t know the answers to,” he said. “As a teacher, I could explain something to students in one minute, but then we wouldn’t spend 20 minutes discussing it. That whole process does more than get you to an answer.”

At RDFZ, Cammer teaches a demo class very similar to his Neuroscience course at Jefferson. For class discussions, he allows students to communicate with each other in Chinese, even though he doesn’t understand himself. Though he  hasn’t been able to learn the language, Cammer has been exposed to many other aspects of China’s culture.

“People are involved with their day-to-day lives; there’s not a lot of political awareness,” he said. “The government is probably doing the best things for their people. It’s not perfect, and it does things that drive the Chinese people crazy, but they’re very happy people.”

According to Cammer, the government administers the Gaokao, China’s national college entrance exam. Though the test was originally created to establish equity, its focus on content and memorization rather than skill development now serves as a sign that change may have to go beyond one high school.