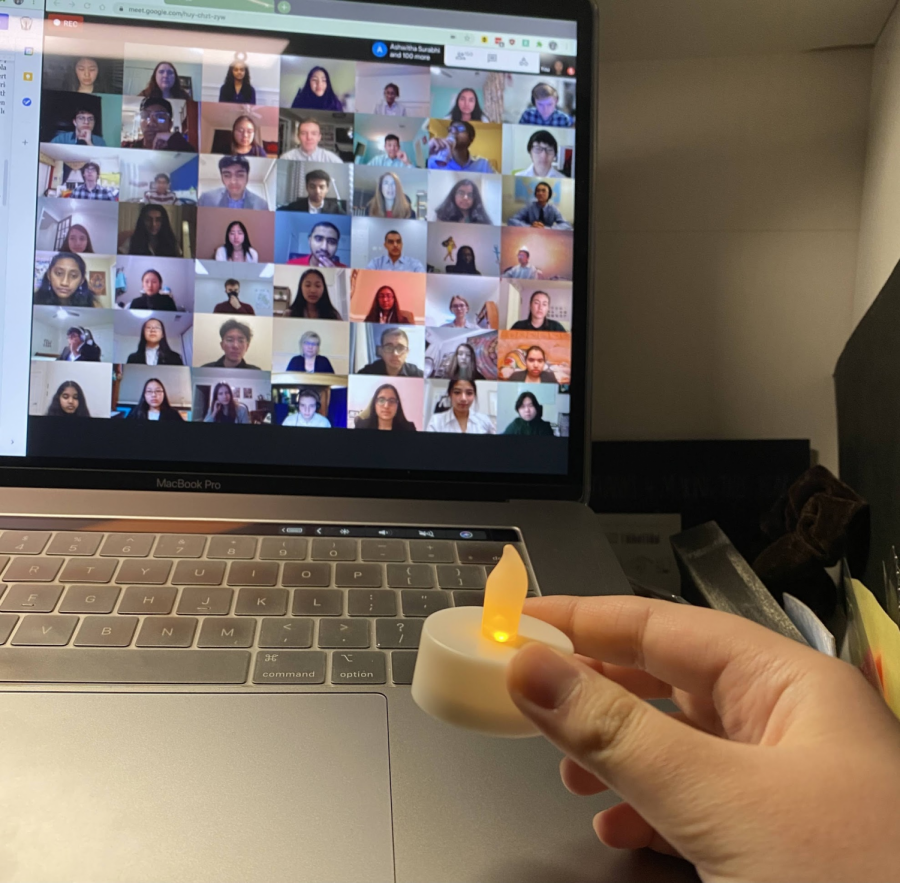 Jefferson senior Minjoo Song is one of the NHS officers (her specific position being Secretary-Treasurer) who held a candle light to the camera for the candle lighting segment of the virtual induction ceremony.

The Jefferson National Honor Society (NHS) held a virtual induction ceremony for 165 Jefferson juniors and seniors joining the organization as new members on Friday, Jan. 18. NHS is a nationwide association encouraging community engagement in academically high-achieving students, and it challenges them to give back to their communities through volunteer work. Due to COVID-19, the induction ceremony was held online this year, rather than in-person.

Ron Nachum, a Jefferson junior who was recently inducted into NHS during the virtual ceremony, shared what he believes the organization upholds.

“NHS is a good way to reinforce values in our community, like leadership and giving back,” Nachum said.

NHS is open to juniors and seniors at Jefferson, and mathematics teacher Ms. Laureen Nelson and history teacher Ms. Emilia Gillevet are the faculty sponsors. Co-sponsor Ms. Gillevet shared some challenges they faced with the virtual ceremony.

“Since it was virtual, we had to deal with technology issues,” Gillevet said. “The first link sent out expired, so I had to send a replacement link somewhat last-minute. The officers had to light the candles [we normally have] at their houses, and show them on-screen.”

“I thought that the way the officers and sponsors managed to give us that community feel in the virtual environment is still amazing and very appreciated,” Banerjee said.

“Typically you’d be up on the stage and you’d shake hands with every single person, and unfortunately that wasn’t possible this year. But at the same time, just getting to see people’s faces [despite] through a screen, the fact that they came even though the year was difficult—that meant a lot to me.”

The ceremony’s keynote speaker was Dr. Sara Goldrick-Rab, a sociology and medicine professor at Temple University and Jefferson graduate. Along with her speech about community values, Jefferson principal Dr. Ann Bonitatibus also spoke about her experiences with school and community service.

The ceremony ended with a candle lighting, where poems about the four pillars of NHS (leadership, service, character, and scholarship) were read. Four candles were lit to symbolize each pillar of the NHS.

“My favorite part was definitely the candlelight induction at the end,” said Banjeree, “I felt the speeches about the four pillars of NHS were very memorable and inspiring, especially given what’s going on during the pandemic.”