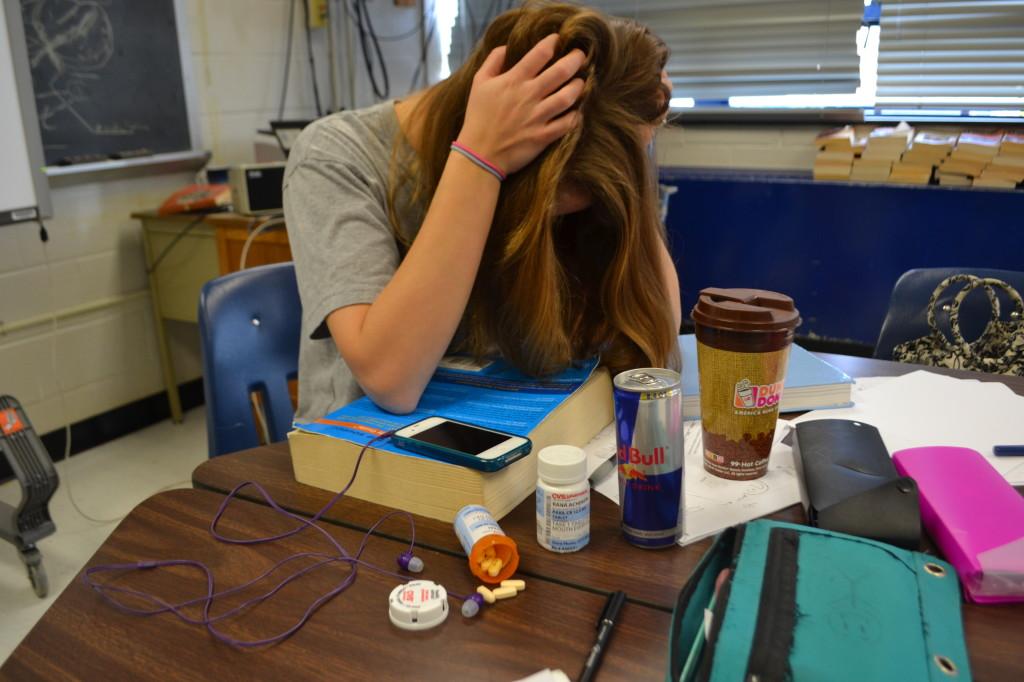 Junior Alyssa Bruce sits at her desk, her mind churning with jewelry designs she has concocted throughout the day. She experiments with a silver necklace to complement her chosen design, but pauses mid-construction to pace around her room and think. This process of design and execution is Bruce’s escape from stress.

“I’m actually a pretty creative person who doesn’t always connect with the science and technology stuff, so sometimes I just need to get away from that and write, paint or bead,” she said.

Bruce’s method is an example of a healthy way to reduce the harmful effects of stress. Stress is defined by the National Institute of Mental Health as the brain’s response to any demand.

According to University of Pittsburgh psychology professor Michael Sayette, alcohol is commonly perceived as an effective temporary stress reliever. When consumed regularly, however, alcohol contributes to increased long-term stress because more alcohol must be consumed to compensate for the dampening effect of stress on alcohol.

The recently released report from the 2011-2012 Fairfax County Youth Survey reflects an increase in substance use by eighth, 10th and 12th graders. Of the 31,106 valid survey submissions, 21.8 percent of students said they had consumed alcohol in the 30 days prior to taking the survey, an increase of 0.7 percent from the 2010-2011 survey.

“We do not discuss causation as it relates to the data from the Fairfax County Youth Survey.  However, we have found correlations for past 30-day alcohol and drug use with bullying, depressive symptoms, suicide ideation and poor grades,” Youth Survey administrator Sophia Dutton said.

Instead of relying on alcohol and drugs as stress relievers, students can turn to other activities to eliminate stress, which can be caused by procrastination.

“All of a sudden, there just doesn’t seem to be enough time in the day, so you find yourself staying up late and hitting that panic button,” school psychologist Greg Myers said. “For some students, this can mean feeling seriously overwhelmed, anxious or even depressed when it all falls apart.”

One student recalls her negative experience with stress.

“In the winter of my junior year, I had a lot on my mind and I hit that point where I didn’t see any breaks coming and the work was loading up,” the student said. “People were getting stressed out and it felt like my world was crumbling around me.”

Myers’ advice for those struggling with stress is to be proactive and to approach the problem instead of avoiding it. A daunting task can become manageable by starting work early and setting goals along the way.

“These strategies may create a much more defined and manageable ‘To Do’ list out of what used to be one big, scary project,” Myers said.

Because of Jefferson’s release time, after school activities and students’ long commutes home, late nights are not a rare occurrence. Sophomore Teja Sathi solves the problem of too much work at night by playing to her strengths as a morning person.

“I just sleep early and wake up really early because I’m a morning person and I function better then,” Sathi said.

An online American Psychological Association survey asked 1,136 8 to 17-year-olds about their favored short-term stress relief methods. Music was the preferred outlet for 66 percent of surveyed teens (13 to 17-year-olds).

“When I’m stressed, I listen to this band named Sigur Rós. It is an Icelandic band and its music is mostly instrumental, so it’s really calming,” Sathi said.

For other students, the opposite music style is a go-to stress reliever. Sophomore Anant Das prefers to blast his music at full volume and “dance like no one is watching.”

“I use that method anytime I’m frustrated with homework or the amount of work I have,” Das said. “I find it a great way to release positive energy and have fun at the same time.”

Physical activities such as dancing, running and other sports increase endorphin production in the brain when done at moderate or high intensities.

Senior Rebecca Applin knits to relieve stress and has been doing so since her sophomore year. Recently, she knitted and donated 19 scares to the Hurricane Sandy relief drive.

“It keeps my hands occupied. It’s like painting, drawing or writing for people. Thinking about the pattern makes my thoughts follow a more logical pattern,” she said.

One of the simplest stress relief methods is the sharing of thoughts in written forms, such as in journals or on blogs like Tumblr, or with other people.

“I like talking it out with people and ranting about how stressed I am or how annoyed I am. It’s not just to people from TJ, but people from other schools too because I can get more of a diversified view of stress,” freshman Dhruv Gupta said.

Another effective stress-relieving technique is deep breathing, in which breathing takes place from the diaphragm to optimize the amount of oxygen in the body. Sophomore Mona Bugaighis uses a relaxation method that puts a twist on this technique.

The complete 2011-2012 Youth Survey report and results from previous surveys can be found at www.fairfaxcounty.gov/youthsurvey.