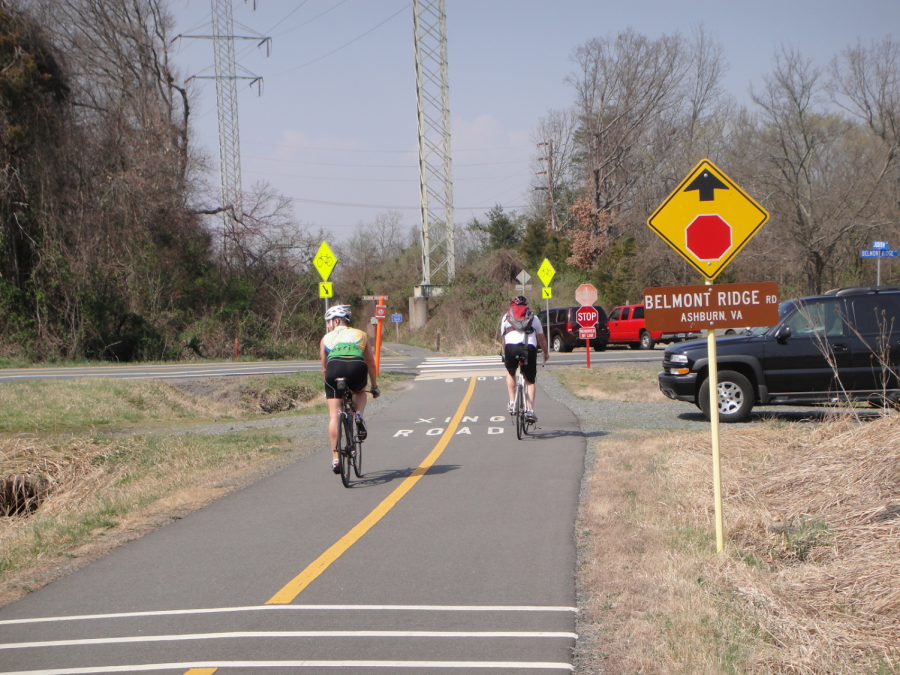 Outdoor trails like this one are places that Jefferson students utilize for extended rides. "Long [bike] rides are really peaceful. It's a nice reprieve from academics,” senior Jacob Consalvi said.

Serenity. Freedom. To Jefferson students like sophomore Harsha Ravella, these are the unparalleled feelings cycling offers.

“When you’re biking, the stress from school and life kind of just goes away, you can’t really focus on that,” Ravella said. “The feeling of when you push your bike and it pushes you, you kind of feel connected as one–  it’s like my meditation.”

Ravella’s love for cycling led him to create the club “Jefferson Cycling” in October 2020, together with senior Sean Nguyen. The club began as a group on Strava, a popular fitness app, but now includes a Facebook group and an Instagram page.

“We started Jefferson Cycling, which is, I think, TJ’s first cycling club. It’s not official,” Ravella said. “It’s just a bunch of people who share a passion for cycling. We have about 30 people so far.”

Ravella created the club out of a desire to unite the school’s cyclists.

“I was never really fond of fitting into the mold of doing a sport that already exists, but I don’t necessarily like,” Ravella said. “I already knew that I loved cycling a lot. and I thought, ‘there’s got to be other people that share the same passion that I do.’ And if they do exist, let’s get together and kind of make our own thing together.”

Prior to the club’s creation, cyclists at Jefferson were a disjointed and unorganized group; although many students cycled, they were largely unaware of each other’s existence.

“I didn’t really even think that [other] people biked at TJ until they started Jefferson Cycling,” junior Irene Williams, another member of the club, said.

The group’s members include cyclists of all types, from people who occasionally bike around their neighborhood, to those who use biking as their primary way to go to places, to those that frequently do 50+ mile rides for fun.

“[People have a] preconception of [cyclists as] people in tight clothing and sunglasses and helmets, but that’s really that’s a specific subset of the cycling community, and Jefferson Cycling is not meant to be like that. It’s just a casual community of cyclists that like to bike not professionally or to race, but just to enjoy the experience together,”  Ravella said. “And at TJ, [though] I don’t think there are any preconceptions, I think there’s kind of a lack of recognition for cycling. It’s not a thing that many people identify with.”

Senior Jacob Consalvi, an early member of the club, encourages everyone to give the sport a try.

“I think that everyone should try biking. I hope people [will] be interested in it,” Consalvi said. “But it doesn’t seem to be that popular of a sport in America.”

Consalvi also laments that a club like this didn’t come earlier.

“We only really reached out to other people through Facebook during COVID, we’ve never actually got to meet up and ride in person so that was kind of a shame,” Consalvi said. “We kind of procrastinated in reaching out to people for a long time.”

Though the COVID-19 pandemic has impacted the club’s development, Ravella plans to start new activities after it ends.

“When we get back to normal, we might start organizing group rides, and things like that to get a more intimate cycling connection,” Ravella said.

At the same time, the coronavirus hasn’t been all bad for Jefferson cyclists, Williams, like many other cycling enthusiasts, notes that the recent pandemic summer has been an opportunity to bike more.

“I actually started biking a lot, I noticed the bike trails were way more crowded. [though] that sort of died down, probably because of weather and work because the lockdowns are starting to go away,” Williams said.

In any case, Ravella encourages anyone at Jefferson that cycles, or is interested in cycling, to join the club.

“Since we’re in this virtual setting, and we can’t really meet each other, and bike in person, we are all recording our activities on Strava and kind of organizing our club like that,” Ravella said. “So [anyone] can download Strava and join us on Jefferson Cycling.”