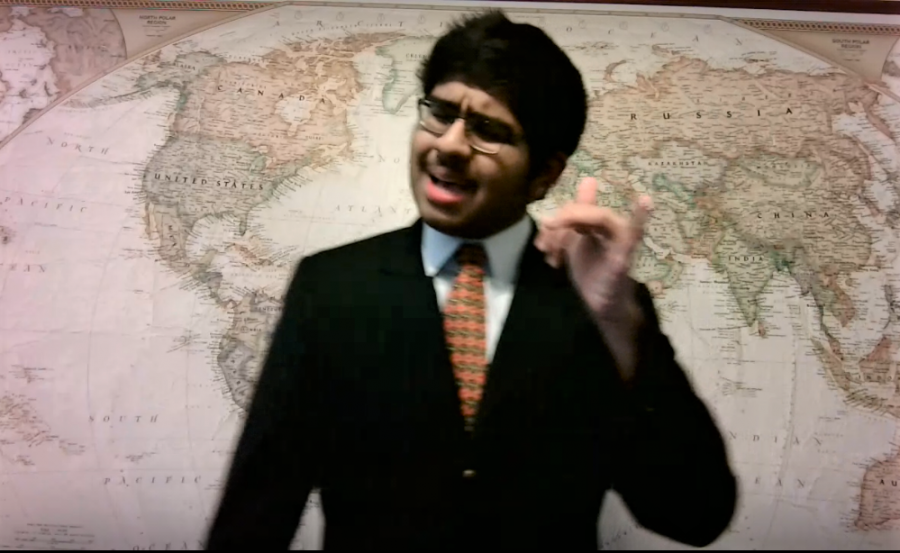 Vellakkat hits a high note in Mariah Carey’s “All I Want for Christmas is You,” the first song of the concert.

Vellekat decided to hold a holiday concert and share his love of Christmas music with others after his friends encouraged him to do so.

“I’m known as Sri the Christmas man on the Discord server because I just love Christmas way too much, especially the music,” Vellekkat said. “One night, some people on the server heard me sing, and they joked about having an organized concert. They were very supportive of the idea, so I decided to actually do it.”

The event provided a friendly environment for students to enjoy Christmas music with their friends. Along with holiday classics, Vellekkat performed songs requested by the audience, which many attendees enjoyed.

“I really liked the song requests, since you got to listen to songs that other guests wanted to hear,” freshman Taohan Lin said.

As both the main singer and lead organizer, Vellakkat handled preparing for his own performance as well as the event logistics. Because of his love for Christmas music, Vellakkat already knew most of the songs by heart. This allowed him to focus on other parts of the event, such as song organization and breath control.

“I had to get the songs in order and find background music for all of them,” Vellekkat said. “Performing the Frozen songs and Rickroll was also challenging because they’re very high-pitched and require a lot of vocal energy.”

The event initially experienced various technical difficulties, such as the capacity of the voice call and playing the background music. Fortunately, Vellakkat and the moderation team were able to resolve these issues at the beginning of the concert.

Along with these technical difficulties, the concert experienced two invasions from bots, software that repeat automated tasks. During the event, these bots interrupted the concert by using a computer generated voice to speak in the voice channel.

“It was really alarming and strange to see random bots invade the concert. It ended up being all right though, since the mods were able to figure it out,” Lin said.

The Discord server’s moderation team responded to the attacks very quickly and banned the bots within 10 seconds of the incidents. After the second intrusion, they took preventive measures by only allowing the performers to use their microphones.

“When I was planning the event, I didn’t think that we needed to ban everyone from speaking because I thought that people could unmute between songs and applaud the performers,” moderator and freshman Matt Sprintson said.

Although “A Sri Vellakkat Christmas” faced many unforeseen challenges, the performers and moderation team overcame them and hosted a festive event. Over 120 listeners tuned in to the concert, which all of the team members are extremely grateful for.

“Frankly, I didn’t know that this many people would think it was worth their time and effort to listen to me, so I’m very honored,” Vellekkat said.