Speaking through the screen 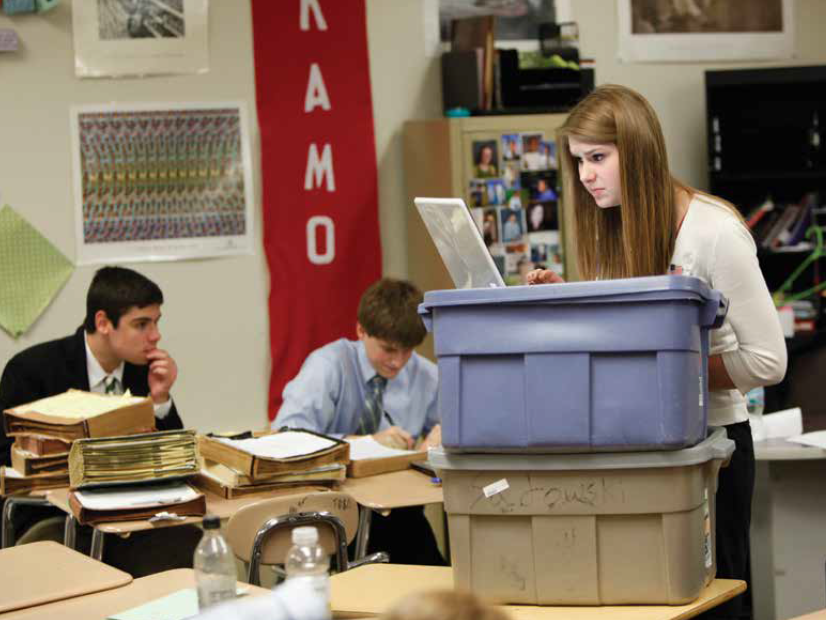 In-person policy debate rounds are usually held in classrooms, where the opposing teams will set up their computers and evidence at different sides of the room. “With in-person debate, you get to interact with everyone around you and have more of a social and chill atmosphere compared to online debate,” sophomore Subrat Poudel said. “The interactions that you get while being in person aren’t usually replicated in the online debate space.”

A student sits huddled around their computer, watching and listening intently as they jot words down on a worn notepad. Sheets of legal paper litter the room, smudged with ink and almost illegible sentences. Finally, they stop their frantic typing and take a deep breath, adjusting their camera before turning their mic on to speak. This is probably not what first comes to mind when one thinks of the word “debate.”

As everything from business to school has moved online during the pandemic, the world of high school debate has also transformed. Students across the nation have had to adapt as tournaments have transitioned to an online format, with debate rounds now being held in video conferences instead of classrooms.

“I feel like debate has changed for every single competitor because personally, when I’m debating online, I feel a lot more disconnected to the actual event, because I’m not physically in front of everyone else,” sophomore Patrick Bai, a member of Jefferson’s Congressional Debate team, said. “I’m not in the moment debating with other people. Instead, it feels like I’m just staring at my camera, and speaking into a microphone, and just yelling into an empty chamber. So it makes me feel really disconnected from the entire event.”

Many students similarly feel like the new online format has negatively changed the event. Aside from feeling disconnected from debate, tech issues have also thrown a wrench into the competitive experience.

“Your quality and how fast you talk is often limited by your technology more than it is your actual ability, so that can hurt some people and help others depending on your internet connection,” sophomore Subrat Poudel, a member of the Policy Debate team, said.

The social aspect of the activity has also diminished as a result of online debate.

“Debate has changed a lot, especially since you’re unable to talk with your opponents after you finish debating and really get to know them, so a lot of the social interactions have lessened,” Poudel said.

The limitations of debating through a screen have made the event less enjoyable for many students, taking away some aspects of in-person debate that made debate so fulfilling.

“Tournaments are a lot less fun. There’s still camaraderie within your team, but one of the best parts of debate was being able to go to tournaments, and hanging out with your team, and meeting a lot of new people,” sophomore and Congressional Debate member William Gutierrez said. “That still does occur to some extent in online debate. But at the same time, you don’t have those in-person connections with your team that you would have had. I was really looking forward to hanging out [with] the captain corps and everyone at national tournaments, and now I might never get that opportunity. You don’t meet as many new people compared to in-person.”

Despite the many drawbacks of online debate, there is a silver lining – the online format makes debate tournaments much more accessible for most. During in-person debate, students would have to book flights and hotels just to attend big tournaments across the country. Joining a web meeting from the comfort of your home is much more convenient.

“Not everybody has the capability to afford a plane and a hotel, and stay there for three days or a weekend. But if you’re online, all you need is an internet connection, and it becomes significantly cheaper than in-person debate,” Gutierrez said. “You’re gonna see a lot more competitors now because a lot more people can afford to come. You’ll also see a lot more people from other parts of the country because there’s no travel cost.”

An example of increased accessibility are the Harvard and Berkeley tournaments, both of which happen around Feb. 6. Usually, most California students would go to Berkeley because it’s local and it’s a lot cheaper to get there, but with online debate, they can go to Harvard and other tournaments instead and compete among the best of the best. The flexibility of online tournaments also allows debaters to branch out to other forms of debate. The broad category of high school debate contains many distinct debate forms, each with its own rules and style.

“With debate online, it’s also a lot easier to experiment with other types of debate. Personally, I’m really invested in congress right now, but my friend and I have started looking for opportunities to go into parliamentary or even policy debate,” Bai said. “In person, we would not be able to do that, because if we wanted to go to, for example, a national parliamentary debate tournament, we would have to take an entire weekend off and have to pay hundreds of dollars just for that one tournament.”

An undesired side effect of the accessibility of online debate is the influx of more inexperienced parent judges. Parent judges are typically not willing to spend the money and time it takes to travel with a student to in-person debate tournaments across the country. The convenience of online tournaments has resulted in a lot more parent judges than before, which has strongly impacted congressional debate in particular.

“[Debate has] definitely changed in terms of the styles that judges tend to like more, because in-person you’re usually going to see a lot more seasoned veteran debaters. People who speak first tend to do better, and people who have simpler points tend to do better. It’s been a lot more centered towards the everyday layperson as opposed to more critical debate,” Gutierrez said. “There are some great competitors that have switched over to other events or quit entirely because of the significantly worse judging per se. Different debaters are doing a lot better now as a result of it, so there’s always the flip side of the coin. But overall, judging is really a lot more skewed than it used to be.”

Ultimately, the consensus seems to be that in-person debate provides a better experience, even if online debate is more accessible.

“I definitely like in-person debate better, because the main con of online debate is that you feel really disconnected from the entire event. A lot of my debate friends have struggled with this new online format, especially with staying invested in debate,” Bai said. “I definitely prefer in-person because it’s more engaging and actually feels like debate.”

Despite the comparatively lackluster experience of online tournaments, students have pulled through with their dedication, continuing to compete and sharpen their skills.

“I love debating, whether it’s in-person or online, so either way I’m still happy to debate. Even though some of the social interactions might not be the same, it’s still debating, which is just something I really enjoy,” Poudel said.

Debate members have found new ways to overcome the hurdles online debate has thrown at them. Some have had to rethink the way they debate and their habits in order to feel more engaged in the round.

“The biggest challenge I’ve faced on the online circuit is feeling disconnected from the debate. I used to type up my speeches on a Google Doc instead of writing on a notepad. That was bad for my performance because I would start reading off my laptop screen, my speeches became less passionate, and I was feeling extremely disconnected,” Bai said. “I started writing down my speeches on my notepad and making more concerted efforts to make my hand gestures visible to the camera, and to actually look at the camera and try to connect with all the other debaters and judges there even though I’m not physically connected with them.”

The switch from in-person to online, not just in debate, but in school and life in general, has also affected the way debate clubs have been able to recruit and teach new members. Juniors Michelle Du and Manda Xie, the teaching coordinators of Jefferson’s Policy Debate club, have had to quickly adjust to the new environment and find effective ways to teach debate novices.

“Introducing novices to policy debate has been a little harder this year due to the constraints of virtual learning, but we’ve tried our best to post and message frequently to keep novices in the loop,” Du said. “While we can’t see people in person and it’s harder to teach behind a screen – for instance, we can’t gauge facial expressions, or how much they understand – Manda and I have lectured online, conducted demo debates, and prepared files for novices. This way, we hope to make the most out of virtual learning and encourage people to join.”

Whether online or in-person, debate is an extracurricular that requires time, investment, and dedication. Many students who discover debate and decide to stick with it are driven by that dedication to keep competing, even when they can’t physically debate in classrooms.

“I discovered congress by pure coincidence. But without it, I don’t know where I’d be right now. My life has certainly been impacted by congress – most of my closest friends come from debate, and I’m more grateful for them than anything else,” Gutierrez said. “I’ve learned a lot about the world from debate. It’s encouraged me to be more politically active, [which was a part] that hasn’t been there since when I was interested in the 2016 election.”

Regardless of how debate members first discovered the activity, their passion for the event ensures that the tournament will go on, no matter what happens.

“Ever since I joined high school, I’ve gotten a lot more invested in debate to the point where most of my friends are from congressional debate,” Bai said. “I want to get better from it. I get rewarded when I improve, and my performance shows that. That’s why I started it, and why I continue.”