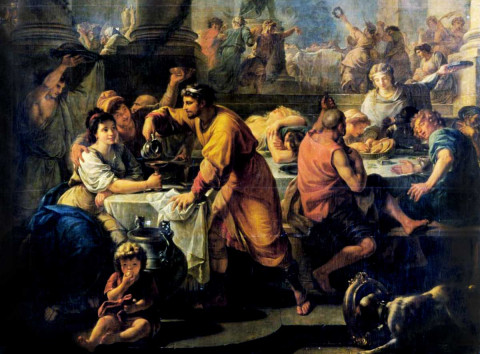 Saturnalia is an ancient Roman holiday usually celebrated from Dec. 17 - 23 to honor the god Saturn and to celebrate the end of the year through different activities and festivals.

Jefferson Latin students kicked off celebrations for the Roman holiday Saturnalia on Monday, Dec. 14. Saturnalia is a Christmas-like holiday celebrated by the Romans with parties and festivals which were held from Dec. 17 – 23.
“Saturnalia is a five to seven day festival held by the Romans in honor of Saturn,” Latin teacher Patricia Lister said. “It was full of feasting and merriment and during this time, friends exchanged small gifts of food, wax candles, clay figurines, and such and these were often accompanied by a poem or riddle to guess who it was from.”
Traditionally, Jefferson Latin students would celebrate Saturnalia through an activity where students would exchange names, buy a gift for their chosen person, and also write a poem which could be about the giver, the recipient of the gift, or the gift itself.
“My favorite part about Saturnalia is the poems,” junior Alex Zhou said. “It’s really fun to try and guess who the gift is from using the poem, who it’s for, or what the gift is. Also, some poems can be educational since it usually involves the person’s Latin name, so it’s a cool way to learn without even feeling like you’re learning.”
Due to COVID-19, Saturnalia was split up into two parts. Jefferson Latin students could either choose to do the cross-class poem and gift exchange, a poem exchange within their own classes, or participate in both these options.
“I am participating in both the poem and gift exchange this year,” junior Nicole Koko said. “I wanted to participate as much as possible even virtually because Saturnalia events are great ways to feel more connected with other students and have a chance to destress.”
Changing the celebration in order to adapt to an online format could take away fun aspects from the festivities, but regardless of the changes, Jefferson Latin students still had a fun time exchanging gifts and poems virtually by sending gifts through Amazon and reading their written poems through an online call.
“Saturnalia is a ton of fun and this year was no exception,” sophomore Gabriel Ascoli said. “It was pretty different this year in many ways like how we had to draw names through a website rather than from a hat, but I’m still excited to give my poem to my person and see their reaction.”
Due to COVID-19, those who are new to Latin this year didn’t get a chance to experience Saturnalia in person, but students believe that still having the option to celebrate online was a great way to be introduced to the Latin community.
“I think Saturnalia is really important this year,” Zhou said. “TJ Latin has always had a reputation for being a ‘cult’ because of how much more participatory everyone is, so having even this online Saturnalia is really important because it introduces to Latin students and any others who are new to Latin what the TJ Latin community is.”