“Happiest Season” (2020): Since when did adequacy become so controversial?

Yuletide cheer and demands for more representation all in the same article! 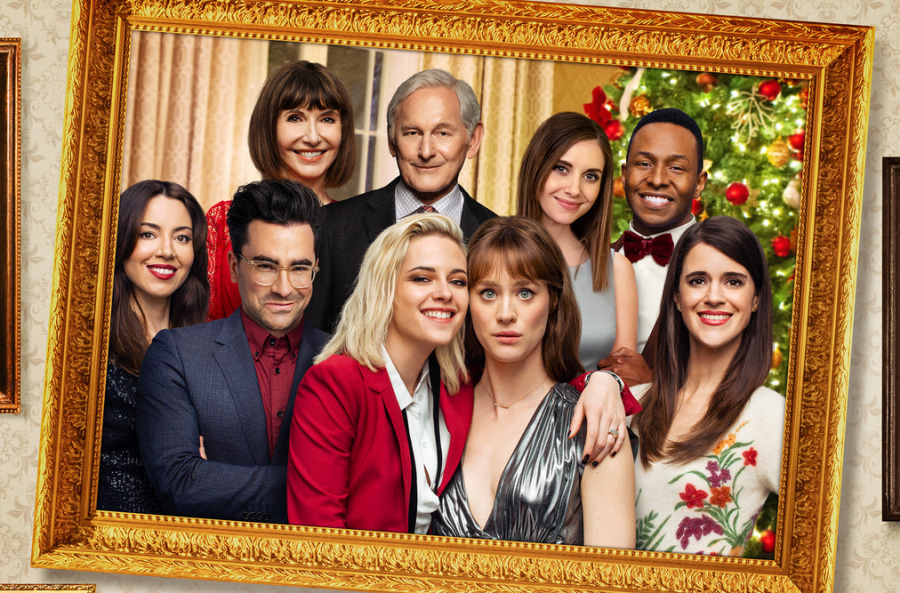 The cast of “Happiest Season” in front of a Christmas tree, with the stars Kristen Stewart and Mackenzie Davis in the very front.

In a vacuum, “Happiest Season” is a perfectly inoffensive Christmas rom-com. The acting is fine, the filmmaking is unimpressive, and everything goes just swell at the end which gives you the warm and fuzzy feeling it’s oh so hard to achieve in real life without the aid of alcohol. Dozens, if not hundreds of these types of movies come out every year. With all that said, why is it that “Happiest Season” is accruing so much controversy?

Is it because it’s about lesbians?

Is it because bigots hate queer folks?

From what I can discern, what makes “Happiest Season” so controversial isn’t that it’s offensive, or that people don’t like that it’s about lesbians. I think it’s just that we deserve better.

For the longest time, queer guys, gals, and non-binary pals just couldn’t exist in movies. It wasn’t an option. Whether it was because of the law, the censors, or just because no one would see it, you could not put anyone outside the norm in your movie, apart from the world of implication. If you wanted to see queer folks represented positively, the only places you could see it were in your “Paris is Burning”s (1990) and your “Funeral Parade of Roses”s (1969), niche documentaries and foreign films made for the sake of art as opposed to profit. Nowadays we’re seeing a bit of a renaissance of good movies made about queer people, and even occasionally by queer people! But now that queer people can get the spotlight, they’ve been put upon the same pedestal as other minority directors, where they have to make great films about the issues of their group in order to get any attention.

While I can’t deny the near perfection of Celine Sciamma’s “Portrait of a Lady on Fire” (2019), and I can’t deny how much good its success will mean for the future of queer filmmaking, I think it kind of ruined every other run-of-the-mill queer folk’s chance to make a movie people won’t get angry about. “Portrait of a Lady on Fire” is so good that I think it might’ve set the bar too high for everyone else. Its near-mainstream popularity and critical acclaim have made it so that one of the only movies, if not the only movie that most Americans can name that was made by a queer person, discounting “The Matrix” (1999), just happens to be one of the best romances ever.

And now here comes Clea DuVall. She’s a good actress, but not an accomplished director, and now she has the task of making one of the first mainstream lesbian Christmas movies. It’s inevitable that it won’t be treated as just another Christmas movie, because queer people haven’t gotten a mainstream romcom in… well, basically ever. Oh! And we’re still dealing with the aftershock of one of the most well made lesbian romances in history! So like clockwork, the movie came out, and people started getting mad at things that they probably wouldn’t get mad at in most other romcoms, because if this is all they have, then it’s slim pickings.

So what’s the verdict? Does “Happiest Season” deserve all the controversy that’s been flung at it? Eh, probably not. It’s a good, heartwarming romance that I’d even say is better than just about every Hallmark Christmas movie by virtue of being enjoyable. In fact, I’ll probably see the movie again next year! But, with that said, “Happiest Season” is not enough. Before we can start accepting that this movie just being good enough is acceptable, people need to start pumping out dozens and dozens of queer Christmas movies of variable quality! Boring trash here! Heartwarming trash there! A surprisingly good piece of trash there! People of all identities and orientations need to have more trashy holiday movies to watch when there isn’t anything else on! Holiday filth for all!

In conclusion, I’d recommend “Happiest Season”. You can see it on Hulu.