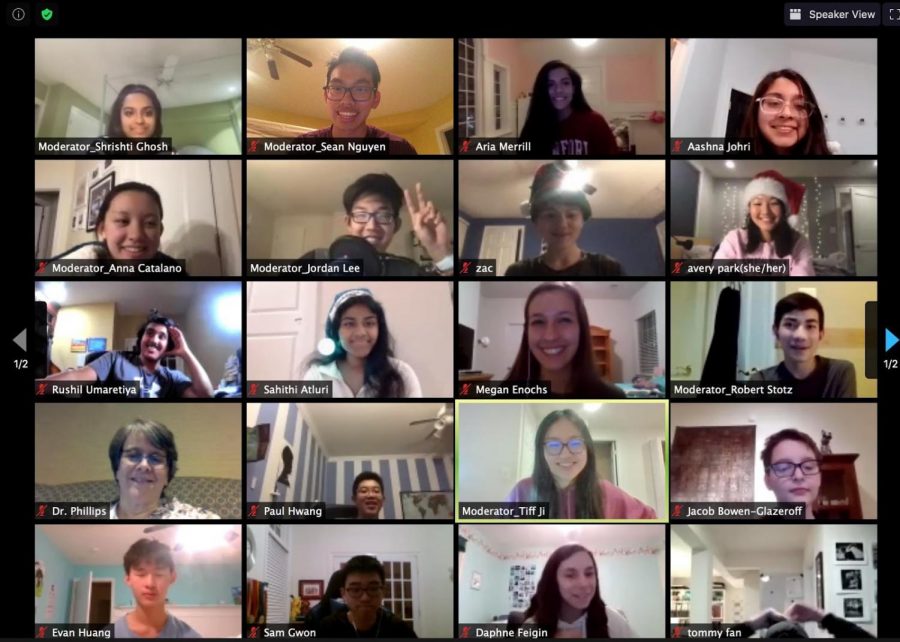 SGA members and attendees smile for a screenshot on Dec. 6 towards the end of the second game night.

Following the success of the Among Us tournament, Jefferson’s Student Government Association (SGA) hosted their second game night on Dec. 4 from 6 to 8 p.m.
“A lot of my freshman friends have told me that it’s really hard to make friends, so we thought it would be nice to kind of bring together the community through these events,” senior and SGA Vice President Tiffany Ji said. “It brings a little excitement to TJ and supplements the activities that we could have had otherwise.”
According to SGA committee member and junior Anna Catalano, the Among Us tournament held on Nov. 6 had a turn-out of about 80 members.
“SGA has been planning ideas on how to get the student body closer through these rough times,” Catalano said. “So what we decided was to have a monthly game night to get every member of the student body who wants to join to get to know new people, relax, and play some fun games with prizes.”
As winter break approaches, its theme impacted this month’s game night.
“For this one, we had a winter theme,” Catalano said. “So, all the games were winter themed. For Pictionary we’d draw winter terms or phrases like the Grinch, a snowball, and White Christmas.”
However, Pictionary wasn’t the only event that took place. Although it was the only event eligible for prizes, Pictionary was accompanied by Scattergories and Codenames.
“It was really fun, and I was having a rough week so it was very nice for me,” first time event attender and sophomore Aashna Johri said.
SGA plans on hosting game nights every month, on the first Friday of each.
“We are planning on hosting one every month for the rest of the year,” Catalano said. “It’s the first Friday of every month.”