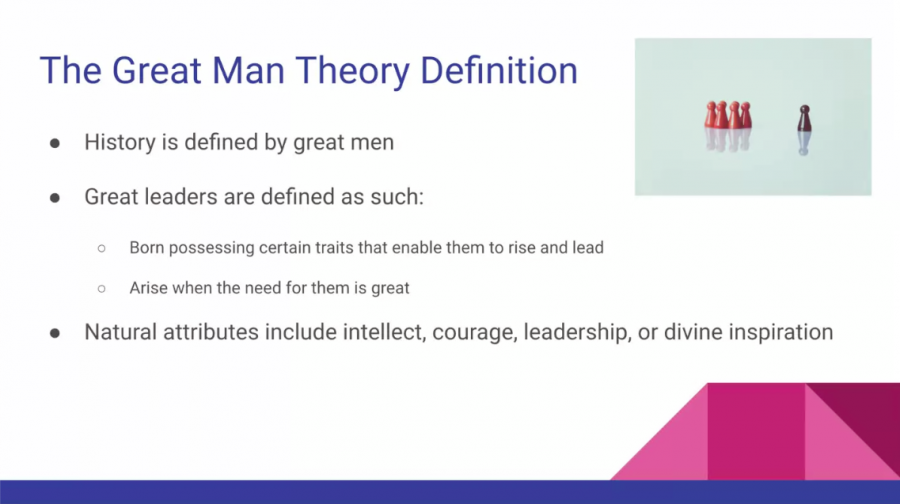 In his role as club secretary, Senior Zachary Kwon concludes his presentation on “The Great Man Theory” before posing a discussion question in Philosopher’s Club, a new 8th period activity which meets every Friday A block.

Do you ever think about how you think? Contemplate if reality is real? Students in the new Philosopher’s Club do.

“In philosophy, we get to have these interesting and important discussions to answer the myriad of different questions we don’t have the answers to. As a policy debater, I grew interested in philosophy after I learned about ethics-based argument frameworks like utilitarianism and deontology. It’s why I joined the Philosopher’s Club last spring,” senior Alex Talamonti said.

Sponsored by the Inquiry into Ideas teacher Brian Field, the Philosopher’s Club was founded by Class of 2020 graduate Ben Altermatt last spring semester. Thus, the club unfortunately had only a few in-person meetings before the pandemic. Accordingly, this year’s officers, Talamonti and his friends, seniors Hashir Aqueel and Zachary Kwon have built the club’s structure and style from scratch.

Compared to Jefferson’s Inquiry into Ideas class where students more closely study specific theorists and conduct discussions based on assigned readings or the already-established Ethics Bowl club which has a more competition-type feel, the Philosopher’s Club aims to provide a more low-key environment to consider philosophical ideas in informal conversation.

“Imagine yourself at a coffee shop casually discussing the meaning of life with a couple of friends. What exists and what doesn’t exist? How do you know?” Talamonti said.

Still in the early stages of club development, Talamonti held off on advertising the club on Jefferson’s Facebook class groups until mid-November while the officers tested different structures for the club, eventually deciding on a lecture/discussion style for regular meetings.

“For the most part, we go through a 10-minute briefing I put together on say, existentialism or determinism, and the other officers join in if they have something to add. After that, we open the floor up for discussion on the presentation’s overarching questions, and people can bring in their own questions too. We’ve got a good mix of about 20 members in the club now, and I’d say about half actively speak and contribute to the discussion and the other half mostly listen and put some good thoughts into the chat every once in a while,” Talamonti said.

Club members appreciate the Philosopher’s Club relaxed atmosphere and open floor as a change of pace from the STEM sphere, though it can illuminate those subjects in a new and interesting way.

“At TJ, everything we do revolves around STEM so it feels refreshing to tap into something new. Alex and Hashir do a really good job of introducing topics by asking questions that allows us to form our own ideas first. Every lecture directly leads into a discussion of the topic. For example, most recently, I learned about the possibility of life being a simulation, which I thought was really interesting because of my interest in STEM,” junior Zaeem Qureshi said.

While it’s easier to have small group discussions and develop ideas together in an in-person setting,  Philosopher’s Club has been less impacted by having to move to the virtual space compared to other 8th period activities.

“The beauty of philosophy is that all it requires is at least 2 sentient individuals. Unlike, for example, physics, philosophy doesn’t rely on physical experiments or anything based in the materialistic world,” junior Rushil Sidhu said.

However, if we have the chance to go back in-person, club officers have put some thought into activities they’d like to do, like discussing and watching movies that introduce interesting philosophical ideas like Inception or hosting regional philosophy-based competitions for younger students.

“One event we’re working to build is called the Tecc Ethics Case Competition, where club members mentor middle school students to answer tech-based ethics questions. For example, a sample question could be like ‘what would be the effect of Amazon implementing full drone automation for package delivery on individuals’ privacy?’” Talamonti said.

Talamonti hopes that introducing activities like Tecc Ethics will pique students’ interest in philosophy, not just in its raw form, but for its applications to the real world. Indeed, many club members now see philosophy shaping their career in some way.

“In STEM, we strive towards the cutting edge to discover the unknown. This unknown has led me towards questioning big picture ideas such as the meaning of life, society, reality, etc. Nothing is ever black and white, which is really interesting,” Qureshi said. “Now, I’m better at performing deeper-level analysis than I was before attending Philosopher’s Club and career-wise, philosophy has really skyrocketed to the top of my interests.”