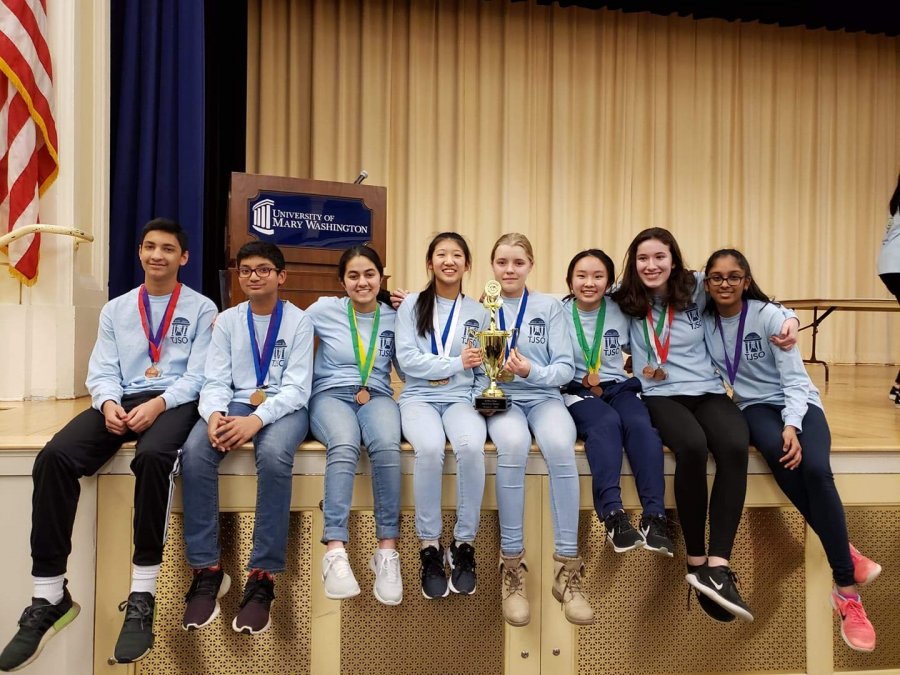 Heart hammering in their chest, Jefferson Science Olympiad (TJSO) applicants skim through the list of this year’s team members, hoping to see their name. After almost a month of waiting, TJSO hopefuls finally discovered whether or not they earned a spot in one of Jefferson’s most selective clubs on Nov. 18.

In the past, TJSO conducted tryouts in person, but due to the pandemic, the tryouts occurred online this year. The application process consisted of a diagnostic test, a problem-solving challenge, and an optional building supplement. Compared to previous years, the application process focused on design skills rather than construction abilities.

“For the building challenge, instead of looking at the actual structures, we relied more heavily on people’s thought process,” Communications Secretary and junior Samhita Vinay said.

Because of the high number of applicants, the tryout initially experienced some technical difficulties and logistical issues.

“There were struggles at first, namely the lag time and organizing the breakout rooms, but we were eventually able to sort it out and run a smooth tryout,” Vinay said.

The officers applied additional measures to prevent cheating since it is more difficult to monitor students over a screen.

“The test questions had to be written in a way so that they weren’t searchable online,” coach and Honors Biology teacher Aubrie Holman said.

To further aid in keeping the selection process as impartial as possible, Holman blindly judged the applicants.

“We use a blind application process where we identify students by their student ID and not their name. The selections are also done by Mrs. Holman, who is a teacher and a third party,” Vinay said.

Qualifying for the team is just the first of the many tests members will face, with a full competition season ahead of them. Although these tournaments can be daunting, they also offer a great team-building experience.

“I’m somewhat nervous and overwhelmed [about the upcoming competitions], but I think it will be fun,” freshman Jaiden Khemani said.

Since Science Olympiad is heavily based on collaboration, TJSO is attempting to promote team morale virtually. So far, these efforts have been successful, and during their first 8th period meeting, all of the members contributed to the activities.

“Everybody had their cameras on and was participating in the icebreaker,” Holman said. “I think we’re off to a good start and in a place where people can get to know each other and do what they love to do.”

Although the virtual environment has prevented face-to-face gatherings, Vinay believes that this new form of communication is actually increasing the amount of interaction between members.

“I feel that our team bonding has been better in the virtual setting because it’s very easy to video call your teammates. We’re seeing each other’s faces, albeit through a screen, a lot more often,” Vinay said.

In spite of the online format of Science Olympiad this year, the team is looking forward to creating new memories during the upcoming season.

“My biggest hope is that everyone will still have a good time. We’re going to try our best to replicate the experiences and inside jokes that come from being part of the team,” Holman said.