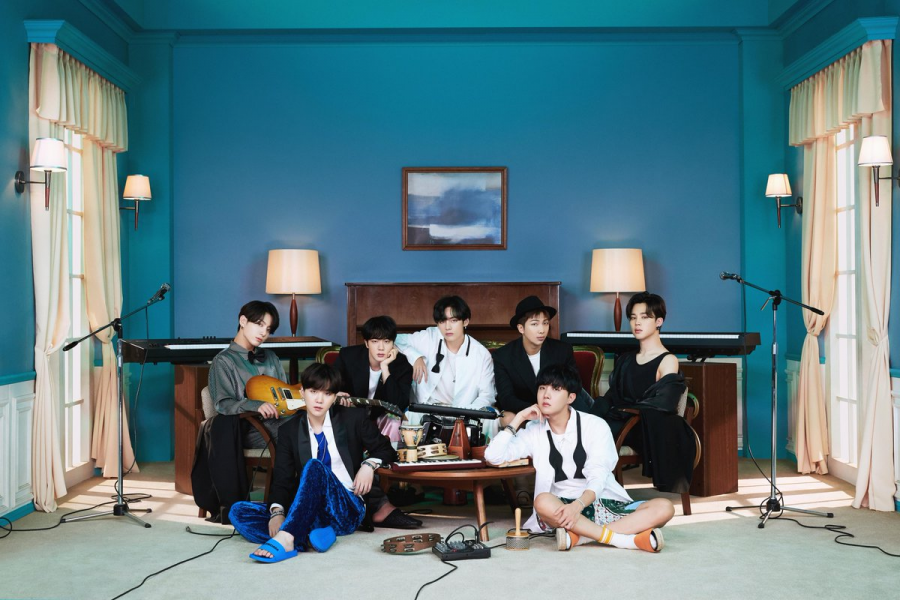 BTS’ album concept photo showcases the homely and uniquely “them” ambience of the album, with the bright but cool-toned colors, the symmetry of the room decor, and the asymmetry of the members. From left to right: Jungkook, Suga, Jin, V, RM, J-Hope, Jimin.

Listen to international sensation BTS’ new album and maybe you’ll find that 2020 is just a bit less horrible than you thought it is.

The group’s ninth studio album is titled “BE,” meaning the state of being, as member Jin explained in an interview with Rolling Stone. As a self-written, self-composed, and self-produced album, “BE” is described by BTS’ entertainment company Big Hit Entertainment as containing “the most BTS-esque music yet,” with all seven members taking the helm of all aspects of the album including visuals, album cover design, and choreography. The youngest member Jungkook even directed the music video for title track “Life Goes On.”

The release of the new album follows the tremendous success of BTS’ single “Dynamite,” the eighth track on “BE,” which was released in August. The “Dynamite” music video broke YouTube records with 101.1 million views within the first 24 hours, and the single spent nine consecutive weeks in the top ten of the Billboard Hot 100 charts, three of which were spent at number one. Although people have predicted that the new album would be less of a success because of the lack of full English lyrics or a Western collaboration, the “Life Goes On” music video garnered 68 million views in the first 24 hours and the album itself is currently the most popular on iTunes.

There are only seven songs on “BE” (the fourth track, “Skit,” is not a song, but BTS’ reaction to their Billboard Hot 100 #1 placement), but BTS still manages to move through an impressively wide variety of styles. The album incorporates genres such as pop, R&B, EDM, funk, as well as old school hip hop, their origin. “Blue & Grey” had me tearing up, while “Telepathy” had me on my feet and dancing. The songs range from heart-wrenching ballads to bubblegum pop, and tackle deeper issues and show the raw, intimate feelings of the members. “Dis-ease,” for example, talks about the “disease” of their profession as artists and the strain it puts on them, while “Blue & Grey” explores the unrestrained thoughts and emotions during a burnout in life. This comes as no surprise as one of the most appealing parts of BTS’ music are their relatable and candid lyrics on societal issues and their own life experiences.

I really enjoyed BTS’ ability to utilize such remarkable versatility without losing their audience in the process. Through the diverse range of genres, listeners will certainly be able to choose their favorite, but I also found myself enjoying styles I never thought I would enjoy. Since I don’t like EDM, “Stay” was my least favorite song, but I could not ignore the catchiness of some of the verses, especially RM’s deep-voiced lines after the bright cry of “stay” in the chorus.

Fans have always been able to relate to and find comfort in the group’s music, but “BE” has increased this feeling by tenfold with the current pandemic. The music of “Life Goes On” takes on a nostalgic quality and the lyrics reassure listeners that despite the chaos, life will continue to go on, while the music video reminisces about life before the pandemic. Other tracks convey the constant suffocating loneliness of quarantine, but also thank BTS’ loyal fanbase, ARMY, for sticking with the group. Some songs take on hauntingly beautiful prose, others witty and clever lines, but all the lyrics are comfortingly real, with phrases such as “Can you look at me? ‘Cause I am blue and grey / The meaning of the tears reflected in the mirror” and “Is it the world or me that’s sick? / Is it just a difference in interpretation?”

My favorite song from the album would have to be “Telepathy.” The funky rhythm and strong bass drew me in immediately and kept me captivated. The melody is impossibly catchy, and the layered voices and harmonies emulate the liveliness of the song. I thought the use of the cowbell-like sounds in the background was interesting and really added to the quirkiness and brightness of the song as a whole.

Listening to “BE” feels like a warm hug and the song is a sign that you’re not alone. It promises a hopeful future of better days to come without tip-toeing around hardships and sufferings. BTS’ self-made album showcases their incredible artistry and their talents in songwriting, composing, and producing, and is sure to touch your heart.