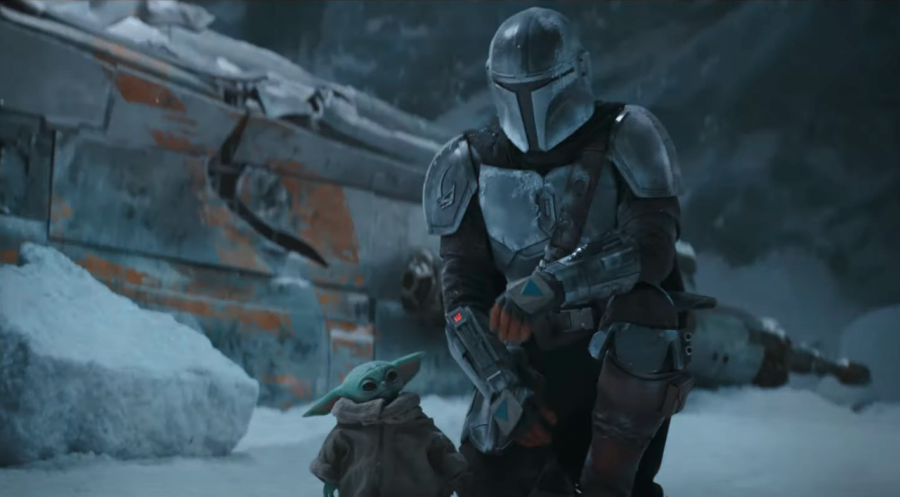 A scene from the second episode of 'The Mandalorian' shows the protagonist walking alongside a younger Yoda.

Picking up right where it left off, ‘The Mandalorian’ season 2 episode 2 (2020) begins on Tatooine, the desert planet home of Luke Skywalker, which has been featured heavily in the movies.

The show follows the adventures of a Mandalorian, an Star-Wars cinematic universe ethnic group with a strong warrior culture and strict creed. After they were scattered around the galaxy, they went into hiding, finding work as bounty hunters with their armor and plethora of weapons.

After the season debut (review here), the Mandalorian wants to find others of his kind to help him return Baby Yoda to his species.

The episode begins with an ambush, as the Mandalorian travels around Tatooine. Baby Yoda is held at knifepoint until the Mandalorian surrenders part of his armor. After he kills the assailant, he heads into Mos Eisley, finding Peli Motto, the repairwoman who he had left his ship with.

She is able to find a lead through a woman who will tell him about another Mandalorian if he transports her and her unfertilized eggs to the moon of Trask, where her husband awaits. They must travel at sub-light speeds, however, vastly increasing the risk of attack from pirates.

As they were flying, a New Republic patrol finds them, and chases the Mandalorian onto a nearby ice planet because he was linked to the escape of a dangerous criminal. He evades them, but his ship is seriously damaged in the attempt. The passenger appeals to his sense of honor as a Mandalorian, and he reluctantly starts repairs.

During repairs, the Mandalorian notices she has left the area, and tracks her through into an icy cave, to a hot spring nearby, where she is bathing with her eggs. The Mandalorian admonishes her for wandering so far, but as they gather the woman’s eggs up, Baby Yoda eats a nearby egg of another type, outside of the spring.

Thousands of these other eggs are dotted around the cavern, and they hatch, revealing large spiders. As the characters run, more spiders, larger, climb out of a hole in the back of the cavern, until finally, a giant spider starts to climb out.

They run back to the ship, where they seal themselves in the cockpit, but the giant spider begins to smash open the cockpit. Suddenly, the giant spider is shot away by the 2 New Republic pilots who chased them onto the planet. They explain that they won’t arrest the Mandalorian because he arrested 3 wanted criminals and protected a prison guard. The episode ends with the Mandalorians ship limping into space, with only the cockpit staying pressurized.

The episode did not disappoint. As usual for the show, the graphics and VFX were incredibly immersive, especially in the spider chase scene-every spider was rendered perfectly, and it was a flawless scene. However, that’s nothing new, since most of the episodes of the Mandalorian have excellent graphics and immersive VFX.

In addition, the score and audio were well done. The music consistently fit the scene, and the audio during the flight chase and spider chase felt really immersive, with all the requisite sounds of flight and spiders.

I didn’t really appreciate the disconnected storylines, however. It was a common complaint with the first season, and although the episodes are now more connected in season 2, there wasn’t a whole lot going on in episode 1 that actually mattered in episode 2. In addition, I feel that the storyline lacks complexity, too. So far, there are 2 plots in an episode: the episodes plot, and the general guidelines of the season plot. There’s nothing else

The episode is good about showing off the creed of the Mandalorian, however, and perhaps that is what Disney wants the Mandalorian to be: more of an idea than a person.

Finally, I want the show to tell us more about the canon New Republic. The 3 Star Wars sequels didn’t touch on the subject at all, and I think the Mandalorian has a unique perspective in that whereas we have seen top down views of Star Wars government (think the Senate, the Emperor, Vader, Queen Amidala, etc), we have rarely seen the perspective from a citizen.

Not only could the show tell fans more about the canon New Republic, it could give them a heretofore unseen perspective on them, helping fans to more thoroughly understand the Star Wars universe. Nevertheless, I felt that despite the negatives, the second episode provided a good follow-up to the first.