TJMUN reaches out to greater community 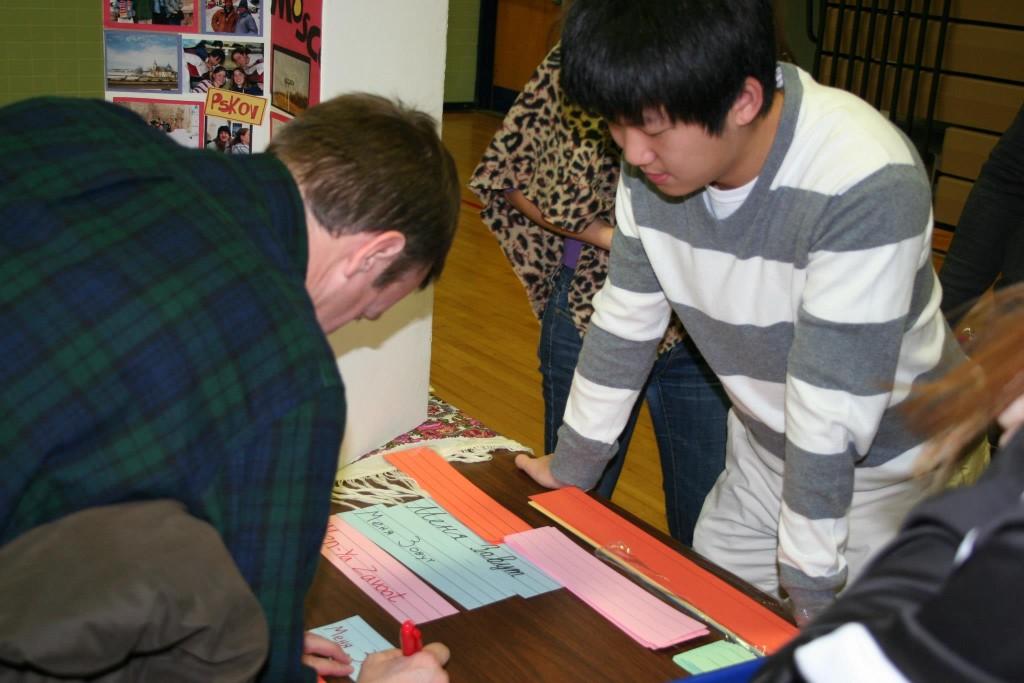 Russian Honor Society member Kyu Kim instructs people how to write their names in Russian as a part of their booth at tjMUN Global.

Jefferson’s Model United Nations club hosted the first “TJMUN Global” on Dec. 15. The Saturday evening event was dedicated to informing the public about current events and international relations while promoting the many culture clubs and Model United Nations program at the school.

Invitations and flyers were sent out to various elementary and middle schools in the area, particularly those with already existing Model UN clubs at their schools. Volunteers included people from TJMUN as well as other students from Jefferson eager to receive service hours and educate younger students.

Clubs such as Amnesty International, Korean Culture Club, Relay for Life and Namaste prepared booths and activities for students. TJMUN also set up three booths educating students about current events around the world, such as the European debt crisis. Purple “TJMUN” boxers were also available for purchase.

“We wanted to spark an interest in global affairs, current events and leadership in young students,” senior Saniya Suri, one of the under-secretary-generals of TJMUN, said. “Since no child would enjoy a lecture format, we decided to have an event where we could have representation from various countries and cultures and teach children about those places.”

Members of TJ Choir and Improv team performed songs and skits for the audience in the auditorium, which received large amounts of audience participation and laughter.

Three prominent guest speakers attended the event to address the audience. These speakers included Peter Mollema, the deputy head of missions from the Netherlands, Erin Renner of the U.S. State Department, and Greg Scarlatoiu, the executive director of the Committee for Human Rights in North Korea.

“Our speakers focused on what the United Nations is and what having a career in diplomacy is all about,” Suri said. “I think it went very well, and we hope to have more people next year.”