Free Birds, a thanksgiving movie about replacing turkey with pizza, is honestly rather bland in flavor 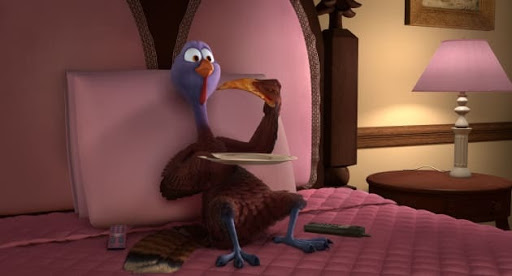 Reggie the Turkey in “Free Birds”.

“Free Birds”, the 2013 movie about time traveling turkeys, did about as well as a turkey flying.

Comparable to the Emoji Movie’s performance in the theaters, the plot of this movie is also as ridiculous as the core concept of “time traveling turkeys”. Let’s take a look at what makes this movie “beg unfortunate comparisons with the dim-witted fowl that inspired it” (Rotten Tomatoes).

“Free Birds” stars a turkey named Reggie who is afraid of Thanksgiving because he knows he’s going to be turned into Thanksgiving dinner that day. He then gets kidnapped by another turkey named Jake, infiltrates a high-tech science base, and accesses a time machine before traveling back in time to 1612, when the first Thanksgiving feast took place. The main antagonist of the movie is a hunter named Myles Standish, who leads a group of hunters against the turkeys. Jake reveals that this idea of going back in time to end Thanksgiving was told to him by a nebulous figure that called himself “The Great Turkey”. A love interest is introduced without any real buildup and unnecessary dramatic tension is added before the complications caused by time travel catch up with Reggie, who meets three other versions of himself, and it turns out that The Great Turkey is actually another version of Reggie. Then, the ending comes suddenly and a random pizza guy is bought back in time and convinces the hunters that pizza is superior to turkey, so Thanksgiving with turkey is suddenly no more. Sounds confusing? It really is, because the plot was not very clear in the first place.

The good point of this movie was the animation. Clearly most of the budget was spent animating turkeys holding sticks, using fire, and catapulting pumpkins.

And… that’s honestly pretty much it.

The jokes and attempts at humor were bland at best, with a few chuckle-worthy lines scattered across the movie. The plot ends too suddenly and really doesn’t make any sense, considering they introduce time paradoxes but never actually resolve any. For example, if Thanksgiving with turkeys was never a thing, Reggie would never have to go on that wild adventure and end Thanksgiving with turkeys, giving rise to the paradox.

Additionally, the cultural insensitivity in this movie neatly glosses over the suffering of the native tribes that was actually the cause of Thanksgiving, when colonists massacred the local population and declared the feast as a thanks to their victory.

If you really want to watch this movie, go ahead and spend an hour of your life listening to bland jokes and trying to understand a plot with no real reasoning behind it. Although “Free Birds” is not the worst movie on the block (that spot belongs to Norm of the North in my opinion), there is definitely a better movie or TV show about Thanksgiving that you can watch instead.