The 2020 Gallery of Missed Opportunities

For the movies which could have been oh-so-good, but just weren’t 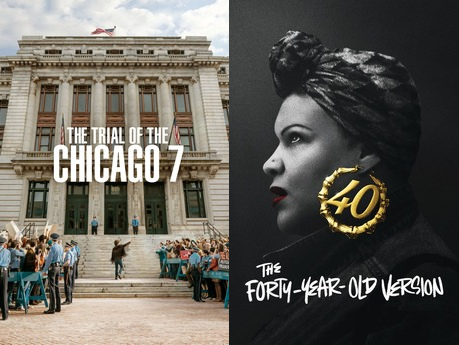 Movie posters for “The Trial of the Chicago 7” and “The Forty-Year-Old Version”.

Come one, come all, to the 2020 Gallery of Missed Opportunities! Witness movies from the current year which could’ve been much better, had they not made a crucial error! Behold their crimes, and hope to god they don’t repeat their mistakes!

“The Trial of the Chicago 7”
Crime: Uninspired Direction

Aaron Sorkin is one of the most talented writers in Hollywood, with a knack for writing larger-than-life characters who always know what to say and how to say it. Unfortunately, as talented a writer as Sorkin is, he can’t direct to save his life. “The Trial of the Chicago 7” is a big story. It has lots of characters and moving pieces that have to be intricately woven together with skill. In order to make a movie like this work, you have to have an acute awareness of how to direct crowds, how to shoot scenes with lots of speaking characters, and how to get good performances out of actors. Unfortunately, Sorkin has none of these skills, and while his movie certainly isn’t a failure, it suffers heavily from everything besides the script.

The first thing you’ll notice is how inconsistent the acting is. Yahya Abdul-Mateen II is terrific, for the few scenes he’s in, but Sacha Baron Cohen is terrible! A good director can make any actor deliver a great performance, but when you have someone with as little experience as Sorkin, it inevitably leads to actors performing at their base level of talent. Along with his inability to direct individuals, his direction of crowds is stilted and uninteresting. When something good happens, the entire crowd cheers, and when something bad happens, they all boo. It feels weird and unnatural when the crowd is so one dimensional, and it makes the complex issues at the trial seem very black and white.

The biggest problem with the movie is how visually uninteresting it is. Sure, I guess the color grading was pretty good, but I never felt like Sorkin pushed what he could do with the frame more than a high production tv show. It honestly felt like this movie was directed by one of the directors Disney farts out to direct its live-action remakes because of how unengaging it was. While I still think the movie is good overall, I think the only way it could have been great is with a serious change in management. Stick to what you know, Aaron, and stay as far away from the camera as possible.

Rahda Blank’s “The Forty-Year-Old Version” is probably the more disappointing out of these two because I feel like it had the most potential to be great. Blank is clearly incredibly talented. Her direction is highly stylized and interesting, she’s a good writer, she’s a very charismatic actor for the most part, and she’s an exceptional lyricist to boot. This movie is brimming with talent and passion, but (and I wish there wasn’t a but) there wasn’t nearly enough restraint. And I feel really bad for saying this, because the movie is a slightly autobiographical take on Rahda’s own experience with others having control over her art, but, oh my god, sometimes this movie is just too much.

This movie is just over two hours long, but it feels like two and a half. I think this is because for every brilliant or hilarious scene that the movie has, it inevitably has another scene which is either unnecessary or groan-worthy. Yes, the visuals can be striking and powerful, especially with intelligent use of black and white with occasional bursts of color, but between those scenes are some which seem like they were made by a film student. In between scenes of snappy and memorable character writing are scenes where Rahda or her flamboyant agent Archie say some of the pettiest things known to man. But when this movie is good, it’s so good. The rap scenes are action packed and smart, Rahda’s midlife crisis is sad but humorous, and the opening scene is incredible.

I think that if the editor had cut twenty minutes of unnecessary and irritating scenes from the movie, “The Forty-Year-Old Version” could have easily been one of the best movies of the year, but as it stands, I feel like it suffers from horrible qualitative whiplash. But alas, there is hope! Remember Rahda Blank’s name! She’s telling interesting stories which I think are worth seeing, and if this is her directorial debut, then I have a feeling that she’ll be someone to look out for in the near future.