Poetry out loud heard from a distance 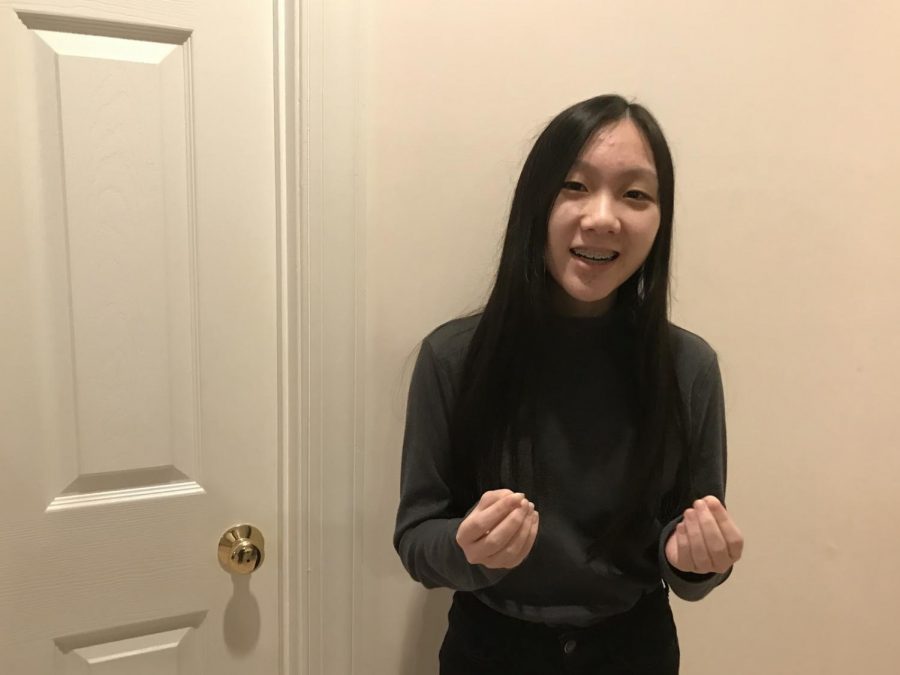 Junior Grace Kang practices her poem, “The Well Rising,” by Willam E. Stafford at home in preparation for her English class’s Poetry Out Loud competition.

Silence reverberates throughout the room. The competition is in high gear: students rise, inhabit the mindset of their chosen poem’s narrator, and perform an interpretive recitation in front of an audience. One filler “um” or misplaced “the” and they’ve lost their chance to win. This is Poetry Out Loud.

Although some may not find value in the simple recitation of a poem, English teacher Michael Miller believes that POL provides his students the opportunity to better their communication and presentation skills, and as such, incorporates POL into his classroom every year.

“I think it shows students what’s possible, with presentation and language. There’s a sense of accomplishment that comes with not only memorizing the poem, but internalizing it and delivering one’s own spin,” Miller said.

Students generally agree as well that the interpretive nature of the poem recitations requires some critical thinking on their part.

“While performing my poem, I tried to emphasize the narrator’s passion about nature. I had to think of how I personally sound like when I talk about things I’m passionate about and apply that general tone to the part of the poem where I was trying to sound really passionate. To contrast this with the more exciting parts of the poem, I tried to perform the peaceful parts of the poem in a more calm tone, with an almost rhythmic and repetitive feel,” junior Grace Kang said.

Furthermore, junior Damilola Awofisayo feels that POL is a great opportunity, especially at a STEM-focused school, to express her artistic side. Awofisayo has worked on her poem since she was a freshman and this year, she’s focused her attention on its execution and improving her stage presence. Similarly, Kang describes how POL has been a great way to show a side of herself that’s more confident and charismatic, where for two minutes, all the attention lands on Kang and she can engage her audience with her poem’s message.

As a competition, school-level POL winners determined in autumn make their way to regional, state, and finally nationals in the spring, where contestants have the chance to win up to $20,000 in prize money. Unfortunately, due the COVID-19 epidemic, the 2020 POL national finals were cancelled. Though Virginia held its state-level competitions online, this year marks the first where students at the school level have performed their poems virtually.

Apart from accuracy (contestants are judged on their ability to recite the poem from memory word-for-word), judges typically assess performers in five categories: physical presence, voice and articulation, evidence of understanding, dramatic appropriateness, and overall performance. As such, one might imagine it would be more difficult to convey “physical presence” and “voice and articulation” in the virtual setting due to the general remoteness of the performer or the audio quality of their device.

“A lot of people’s hand movements were cut off. Sometimes, you couldn’t clearly hear what people were saying and couldn’t see the overall body language, which is really unfortunate,” Kang said.

However, despite these limitations, it’s possible that POL has provided opportunities in distance learning where there were none before. Kang mentions that POL gave her an opportunity to connect better with her teacher and peers, since those few minutes of her on camera and speaking was her teacher’s and many classmates’ first impression of her. She also adds that performing online has lessened her pre-recitation nervousness in comparison to previous years when she’s performed in-person.

“The vibes of the competition were overall very encouraging. In my class, to make sure that people were paying attention, my teacher required everybody to type what the performer did well. I feel like the messages helped create a more positive, relaxed energy than what I expected online POL would be like,” Kang said.

Meanwhile, students like Awofisayo, whose English class did not take part in POL, had the chance to perform individually during 8th period on either November 11 or November 13. Although Awofisayo mentions that she missed having her friends in the audience like she did when school was in-person, she found it easier to perform and focus by just looking at the one view, the camera, instead of looking at individual faces in the audience.

“No one turned their cameras on. I thought it was better because there were no sudden movements or distractions,” Awofisayo said.

As a result of these positive aspects, Miller remains confident that the competition has retained its value as a valuable experience for his students.

“Although I think the value will be a little diminished in some way, the same way that it’s weird talking to a computer, I think Poetry Out Loud gives a lot of students voice. The  student becomes the narrator. They become the poem. I have my students do Poetry Out Loud because I’m preparing them to be the people who can stand up in a town hall and raise an objection or ask a very difficult question: to stand up and speak,” Miller said.