“The Queen’s Gambit” (2020): Finally, someone made a show about an interesting sport.

With all the buzz surrounding the newest hit series, does it deserve the hype? 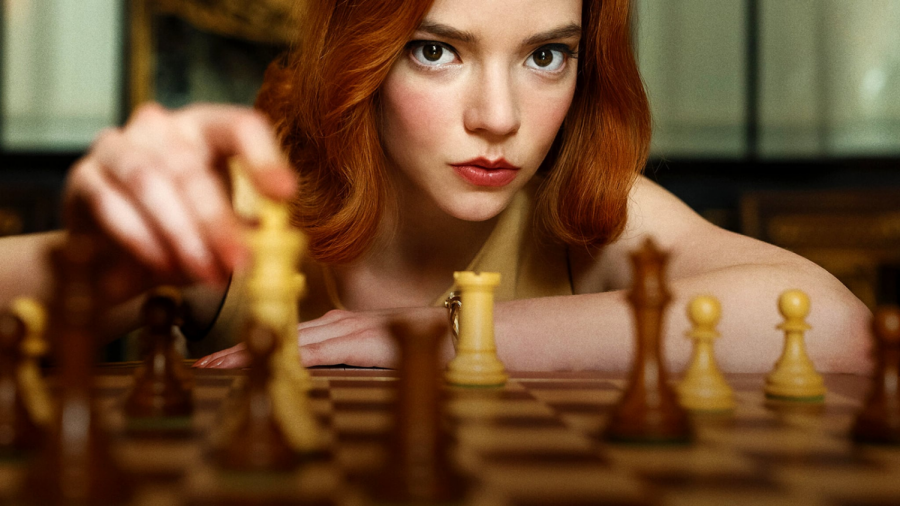 Anya Taylor-Joy as Beth Harmon in “The Queen’s Gambit”. Image courtesy of IMDb.

I think it’d be pretty uncontroversial to say that chess isn’t one of the more inherently engaging spectator sports. It’s not flashy, it can take hours on end for just a few moves to happen, and enjoying it requires more than a baseline knowledge of the game, which isn’t the case for most other sports. Despite this, I think it makes total sense that the new big Netflix mini-series “The Queen’s Gambit” is a runaway hit, despite the crux of the show being that most inaccessible of pastimes. Now, whether or not it deserves the hype is a matter of opinion. I don’t quite know where my opinion stands.

“The Queen’s Gambit” is the latest in a long line of prestigious mini-series which have taken general audiences by storm. Last year there was “Chernobyl”, the year before that there was “The Haunting of Hill House”, and just recently there’s been a huge influx of short-form television which no one can get enough of. So what makes this one special? Well, it’s about chess, for one. The series follows Beth Harmon, played by the inimitable Anya Taylor-Joy, on her journey to become the best chess player in the world while struggling with substance abuse. The show sets itself up for success from the get-go with an opening scene of Beth waking up in the bathtub, taking some pills, and then arriving late to a chess match with a mysterious looking Russian. The show then cuts to the beginning of Beth’s journey and is mostly chronological from then on. This kind of setup is great for binge worthy television, because the story of incredibly competent yet flawed characters is great for drama, and especially good for longer form media.

Along with having a binge worthy premise, the show is, perhaps more than anything else, perfectly paced. Story beats are introduced, explored, and reincorporated in ways that are compelling, intriguing, and exciting. Even after a less than stellar episode, I still found myself excited to see what was next, and the show never lost my interest. Along with that, “The Queen’s Gambit” is very easy to swallow. The pace is too fast for the show to ever really focus on complex themes like the prevailing racism and sexism of 50s and 60s or even Beth’s drug addiction, and instead opts for a sort of candy coated version of the world. There are vague themes of working together and the beauty of chess, but they don’t amount to much. This isn’t necessarily a bad thing – “Die Hard” (1988) is one of my favorite movies, and it’s incredibly simple – but I think it’s important to note when talking about the success of the show.

But what about the quality of the show? For however binge worthy it is, is it as great as some say? Well, I won’t tell you whether a show is objectively worth its hype, but I don’t think it’s great. Don’t get me wrong, it’s a lot of fun, but I feel like “The Queen’s Gambit” simultaneously indulges too much in some things and doesn’t do enough of others. I thought the presentation of the show was really strange and inconsistent in a way that wasn’t helpful. Most of it was typical television filmmaking, with pretty consistently fast cuts and simple visual choices, but every once in a while the show would go over the top for no reason. This ranged from weird VFX chess pieces on the ceiling to extravagant shots that zoom out from one room, swing around the side of a building, and then zoom into another room in one cheesy camera movement. I don’t think it’s a poorly made show, but whenever I think of great choices in presentation, I can only think of the chess games, which are excitingly made without being a sensory overload. The use of color in the show is also quite peculiar. It often felt like consideration wasn’t made to exactly which lighting and color choices were the best for a given scene, which resulted in a strange color palette that jumped between muted and harsh at the drop of a hat.

I think the biggest problem with the show is a lack of grit, both visually and thematically. The show really wants you to think it’s an important drama about a girl overcoming addiction and the chess world to become the very best (like no one ever was), but it never pays attention to its darker themes for long enough to make me feel what it wants me to. Sexism is briefly mentioned by some characters before chess matches, racism is brought up sparingly by the one black character, and all the horribly addictive things which should be ruining Beth’s life are trivialized with pastel colors and little focus. For as flashy and fun as the show can be, its dramatic elements rarely have weight, which results in an enjoyable but shallow experience. I’d recommend “The Queen’s Gambit” to you if you’re looking for some easy watching, but if you’re looking for great television, there are plenty of other fish in the sea.