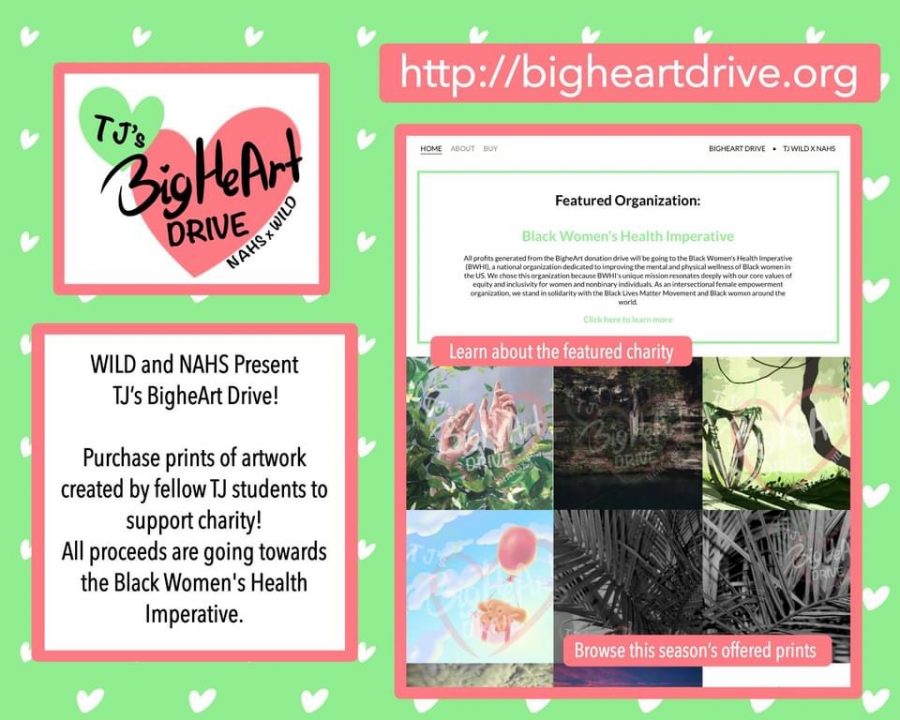 Jefferson’s Women in Leadership and Development (WILD) club and National Art Honor Society (NAHS) partnered together to launch the BigHeArt Drive on Saturday, Oct. 24, selling prints of student art pieces for charity causes. All proceeds made from the prints currently on their website are to go to the Black Women’s Health Imperative (BWHI), an organization addressing the health and wellness of African-American women in the United States.

The drive was initially inspired from a desire to continue the discussion regarding the Black Lives Movement in the Jefferson community.

“I noticed that in the [Jefferson] community, there were a lot of people talking about [the movement], but soon enough, that fizzled out,” senior Anisha Jain, BigHeArt’s website manager and WILD co-president,said. “I didn’t know a way to keep reminding people that this is something that we need to keep donating to and keep thinking about, because it isn’t a problem that ends in a couple of weeks.”

BWHI was chosen as the drive’s first featured organization because of its intersectional aims, but Jain has plans to continue the effort, such as launching a holiday card collection.

“It’s all tentative, but if we are able to eventually get to the point where we’re donating a significant amount of money, our plan is to switch around organizations and causes to whatever is topical, but also should be talked about for longer in the [Jefferson] community,” Jain said.

Besides bringing social justice issues to the forefront of the Jefferson community, Jain hopes to provide artistically talented students a creative outlet for their pieces.

“I feel that the [Jefferson] community doesn’t care much about [its] artists, and I thought it would be good for the NAHS kids to share our art with [others] at [Jefferson] and get some exposure,” Jain said.

NAHS co-president senior Jennifer Abraham believes that the art drive could also help motivate underclassmen in the Jefferson art community while benefiting the outside community.

“As an officer of NAHS, I really wanted to set a good example for the art kids coming up behind us,” Abraham said. “I love making art and I love contributing to anything the art department is doing especially since the department is pretty small, [and] it’s a really great cause that we’re contributing the funds I really believe in their mission statement.

BigHeArt is currently accepting student artwork to be showcased through their google form.