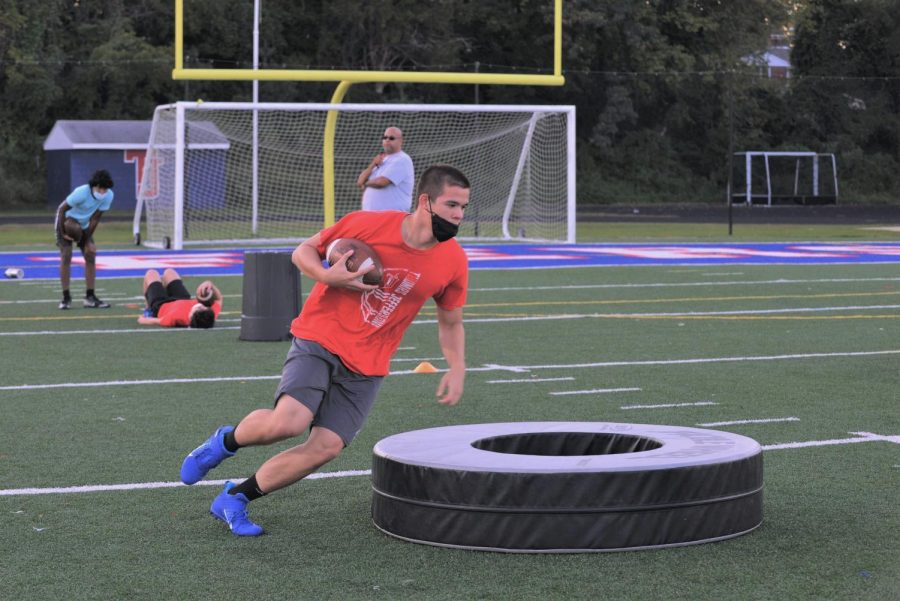 Weaving his way around obstacles, junior Hilal Hussain participates in a running back drill. Players are now allowed to use footballs, but they must be disinfected regularly. “It [felt] like a normal practice, which was a nice refresher from all the quarantine,” Hussain said.

“The regulations are disappointing but I completely agree with them,” Offensive Coordinator Michael Auerbach said. “It sucks that we have to limit our equipment usage and stay far apart but that’s not the VHSL’s fault.”

In July, the VHSL adopted a condensed sports schedule that pushed the start of the football season to February 4th. However, the schedule presents overlaps between sports seasons, introducing a challenge to students who are involved in multiple school athletics programs. Additionally, the shift has raised scheduling issues for the games.

“In the last five or six years, we had phased out playing FCPS schools [so we] played a lot of homeschool and charter school teams,” Auerbach said. “Not all of them follow VHSL schedules, so some of those teams aren’t playing in February. It looks like our Athletics Office has secured a schedule that [allows us] to play six games, but it’s not 100% certain.”

As part of on-field guidelines,  all players are subject to a temperature check before practices. However, senior Niko Economos recalled that several players were turned away for failing the check and instructed to obtain a doctor’s note to explain why.

“[They failed] because they were sitting in the sun waiting for the temperature to get checked [and] when they did, they were completely fine,” Economos said. “It’s important because you don’t want to be spreading coronavirus but it’s kind of a weird gray line because [they] probably don’t have a fever.”

Even as restrictions ease, access to the weight room for team strength training is still prohibited, and a strict no-contact rule means essential tackling drills are out of the question.

“[Right now] we’re focusing on fundamentals: dealing with your footwork, trying to keep a good stance, a good base, and keeping your feet under you,” Head Coach Aaron Raffle said. “Those are things you can do without necessarily having a football.”

Senior Caden Phillips finds it essential to keep putting in his best effort despite the uncertainties surrounding the season.

“I’ve always been in the mindset that if we get a season, then it’s gonna be a gift to us,” Phillips said, “so I’m going to keep working hard and prepare the best I can.”