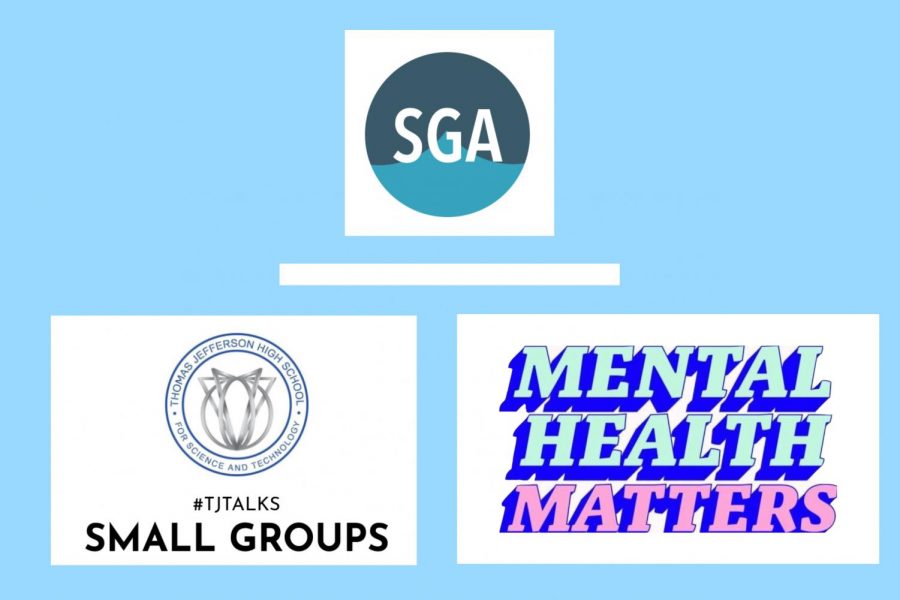 Two of the SGA’s currently active programs center on students’ mental health, which is a much-discussed issue during the beginning of the 2020-21 school year, in which all classes are taking place online. Image by Rachel Lewis.

Blackboard Collaborate, Fairfax County Public School’s virtual learning platform, is known to students mostly as a screen filled with blank avatars and the occasional red dot symbolizing a new chat message. In addition to spaces for learning and exploration, classes at Jefferson used to be a reliable daily source of socialization for students. Now, each period is more akin to a conference of scientists studying the art of silence.

Fortunately, Jefferson’s Student Government Association (SGA) recently created a new program, TJ Talks, that aims to alleviate some of the loneliness students are experiencing due to not attending school with almost 2,000 others five days a week. TJ Talks arranges students into small groups, each led by a group facilitator. These groups are encouraged to meet regularly throughout the school year to chat, play games, and simply relax amid the high-stress world of Jefferson academics.

“The idea [for TJ Talks] was based off of experiences that I’ve had, and I’m sure a lot of other people [have] had, at places like summer camps or church retreats, where they sort all the people into small groups that stay together for the remainder of the camp,” senior Jordan Lee, SGA secretary, said. “I always noticed that when we’re put into those kinds of groups, we all get along really well and form close bonds.”

SGA expected the student body to show some interest in TJ Talks, but they didn’t expect that a total of 268 students would sign up.

“At the end of the day, we wanted it to be voluntary, so it was a little bit of a surprise that so many people were willing to [participate], but we were just happy to accommodate it,” junior Bhaswith Suresh, SGA treasurer, said.

Although SGA is pleased that 14.83% of students are part of these small groups, directing a program for hundreds of students hasn’t always been a breeze.

“We’re just throwing these groups together, and it’s really up to the facilitators to get these people together in one method of communication that works with everyone. For some groups it has been hard… contacting some of the members,” Lee said. “Everyone has conflicting schedules so [another] challenge [is] finding a time that works for everyone.”

Although TJ Talks has seen difficulties arising from miscommunication and lack of responsiveness, most groups were able to successfully contact and connect their members.

“The first week we set it up, I sent out an email to everyone, just to check in on them and see how things are going. It’s been really encouraging to me to see facilitators say, ‘Oh, we just had our first meeting. It was really fun. Everyone’s getting along, and everyone just clicks together,’” Lee said.

Another initiative that SGA is currently promoting is the Mental Health Coalition (MHC), made up of students from multiple grades, who “seeks to foster open communication between students, parents, teachers, and administrators”. It might sound similar to TJ Minds Matter, another Jefferson club, whose mission is to “empower students to speak openly about mental health in order to educate others and encourage help”. However, although the MHC and TJ Minds Matter do occasionally work together, Suresh says that they have separate goals.

“If students think something is stressing them out, we try to work with teachers so that they can alleviate [it],” Suresh said. “We also hear from teachers on ways that they think they can help students. We really try to be a liaison between the staff and students and also foster proper policymaking to ensure that students get what they need.”

The MHC’s current priorities are providing resources for students feeling isolated, especially due to the virtual school setting, and finding solutions to the stress induced by students’ workloads.

“We had a town hall with Dr. Bonitatibus… two weeks ago, about the workload at TJ. A lot of people feel that [it] is stressing them out. We talk to teachers [who] understand that they may need to tweak things,” Suresh said. “One of our major goals is to take that 60 to 75 minute policy [the administration’s limit on weekly homework per class] and see if we can make it more concrete or define it a little better.”

The MHC also recognizes the impact of parents’ views on their children’s attitude towards mental health and their willingness to discuss it in school.

“[The MHC had] a meeting with parents to talk about the cultural stigma around mental health, to raise awareness for [it],” Lee said.

SGA has hosted open forums before the 2020-21 school year for students to share their opinions on various topics which often relate to students’ mental health, such as workload. However, student attendance at these open forums has dramatically increased in the past few months.

“Last year, it was usually just student leadership officers from class council[s]. This year, we’re getting a bunch of students of all different grades,” Lee said. “Last year it [was] during lunch [and] people have different things they want[ed] to do, whether it [was] sit[ting] with their friends or clubs, but since [the forums are] virtual this school year, a lot of people have more free time, and there [are] definitely a lot [of] different issues to bring up with the virtual school year.”

Over the next several months, SGA plans to increase outreach to the student body as a whole and better publicize open forums and other events students can be involved in.

“A lot of the student body didn’t even know that some new initiatives existed,” Suresh said. “Even though we’re SGA, the SGA officers are only four people. We love to hear from the rest of the student body. We essentially are in service to you guys, so we definitely appreciate your support, and we will definitely try to reach out to as many of you guys as possible to get involved in all these initiatives.”