There was a bit of a lull this week, so we’re talking about censorship and a cartoon frog. 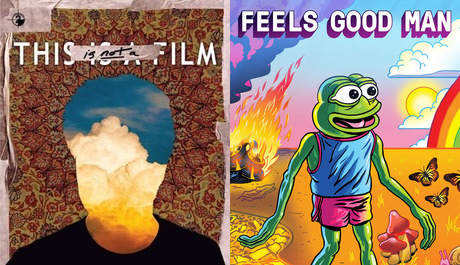 When you see a name like “This Is Not a Film”, I think I know the image that comes into mind. Artsy. Pretentious. A voice over detailing the nature of cinema while a guy on screen sits in a chair. Well, if that’s it, you’re sort of right, but you’re missing some context. “This Is Not a Film” is great, not necessarily because of the content, but because of the pure audacity of its existence.

Jafar Panahi, one of the most highly respected Iranian filmmakers, is not allowed to make movies anymore. Panahi makes films which, while not directly stating it, heavily imply that there are things about Iranian society which people may be unhappy about. Unfortunately for him, the Iranian government doesn’t support films like that existing, which led to the filmmaker’s arrest. After widespread backlash from prominent directors from all around the world, the Iranian government caved in and lowered the sentence to house arrest, with the caveat that Panahi be banned from making movies.

This movie is about Panahi breaking the law. He has the unquenchable desire to create film, and so he must find a way to make a movie, without making a movie. He does this by exploiting loopholes that no reasonable person would believe. No, he didn’t direct a scene from his screenplay he couldn’t produce, he just walked through the scene in his living room while someone just happened to have a camera pointed at him. No, he didn’t have an exposition scene, his friend just happened to leave the camera on when he left the house, and Panahi just happened to be talking about his imprisonment.

Small rebellion after small rebellion makes “This Is Not a Film” not only weirdly entertaining, but downright inspiring. It’s a movie that reminds you of the importance of art, and how anyone can make it, no matter their circumstances. This film is not accessible by any means – most of its runtime is devoted to a man loafing around his house – but it’s brought together in a way which is still incredibly resonant. If you have good patience, I’d highly recommend you go see it. It’s remarkable that you can.

“Feels Good Man” is surprisingly incredible. It almost feels silly trying to explain the merits of a documentary about Pepe the Frog, but the film speaks for itself. “Feels Good Man” is not just a great work of documentary filmmaking, but is one of the most emotionally satisfying movies of the year. The film follows the journey of Matt Furie; his creation, Pepe the Frog; and the history of the internet itself, on which Pepe had a remarkable impact.

“Feels Good Man” is made most effective by… you guessed it, the presentation! This documentary has one of the most unique visual styles of any I’ve seen: being an alchemical mix between live action footage, archival internet footage, and original animated sequences. Each of these is well done on their own, but the use of animation leads to incredibly entertaining sequences, where the editing and visuals almost meld into each other, creating segments that are simultaneously hilarious and informative.

But contrary to what you may think about a documentary about Pepe the Frog, “Feels Good Man” isn’t all laughs. It’s a shockingly dark tale at times, detailing the character’s appropriation by white supremacists and the serious ramifications it had on internet culture as a whole. The way the presentation aids in this is fascinating, adding an intensity to the information that’s sorely lacking in many other documentaries.

“Feels Good Man” is so wide in its scope that it shouldn’t work, but it does. This may be one of the few documentaries in existence that treats the internet and internet culture with respect while still remaining playful. This movie is an emotional rollercoaster, with highs and lows that you so rarely see from documentary filmmaking, cementing it as one of 2020’s best movies. Go see it! You can rent it online wherever you rent movies.