Blackpink’s ‘The Album” is sure to light up the sky

From bubblegum collaborations with Selena Gomez to heavy trap and electropop tracks, "The Album" has it all. 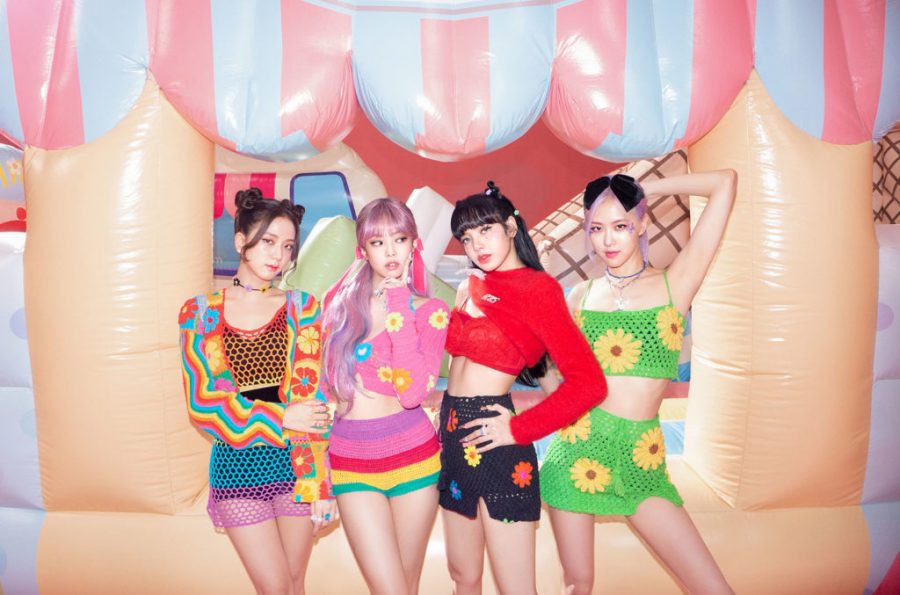 Blackpink poses in front of a bouncy house in a promotional image for “The Album.” From left to right are the members, Jisoo, Jennie, Lisa, and Rosé.

When Blackpink, one of the most famous K-pop girl groups globally, announced back in April that they were releasing an album this fall, I was excited. I was also skeptical that they could pull it off. As an album, would it manage to be a classic, or would it quickly become boring to listen to?

It can be very rare for an artist or a group to be able to continue with the same branding for so long, especially for female artists.  However, with “The Album,” the group managed to do just that. Singers Jennie, Jisoo, Lisa, and Rosé sing on the 8-track record that runs around 30 minutes long and includes collaborations with Selena Gomez and Cardi B.

The album is interesting because it showcases their versatility. Ranging from sassy songs like “Pretty Savage,” to more heartfelt songs like “You Never Know,” to cuter concepts like in “Ice Cream” (ft. Selena Gomez), the album is put together as a sampling of just what the quartet can do.

Each member also has a distinctive sounding voice: Rosé with a sassy bubblegum tone, Jennie with a high pitched tone and darker lower range for rapping, Jisoo with a soulful deep voice, and Lisa with a bright tone and fierce lower rapping. In several parts of “The Album,” producers blended the singers’ voices to better suit the song. This particularly brought out Jisoo’s voice even though she did not have as many lines, because she took care of most of the lower range vocals.

Two of my favorite songs are “Bet You Wanna” ft. Cardi B, which features some of Rosé’s best vocals on the whole album, and “Love To Hate Me”, which has one of the best build ups to the chorus. “Bet You Wanna” has strong bass in the background, but lighter, playful vocals on top, which I enjoyed. “Love to Hate Me” has a vocal hook with a high note that drops into a chanted chorus and more, which makes the vocals that follow pop more.

Having listened to Blackpink’s songs before, I knew that many of their songs felt like an adrenaline rush, and often had similar structure. The buildup to the chorus and the almost intimidating vibe is one of the trademarks of a Blackpink single  – and this album manages to capture that. Keeping it short and sweet is something that made me appreciate the individual songs better.

Although I was skeptical at first, I really enjoyed listening to “The Album.” Some songs and groups get old after listening to them a few times, but “The Album” and Blackpink definitely do not appear to be disappearing any time soon.