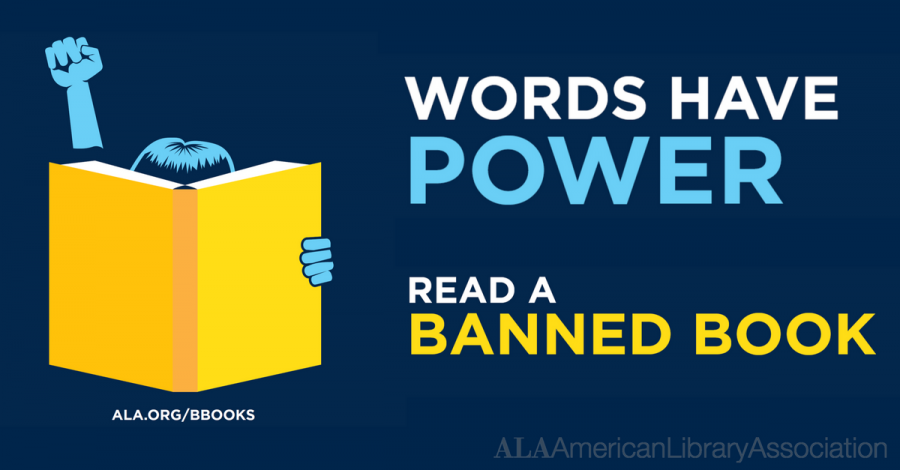 To Kill A Mockingbird.

All classics, all taught in schools across the globe. But these works have something else in common. Whether it’s for certain language, like in To Kill A Mockingbird, or political messaging, like in Animal Farm, these books are constantly banned or challenged.

Books are usually banned by communities because their content is perceived as offensive or unwanted to that group. Such ideas can be political, religious, racial, LGBTQ+, violent, and/or sexual in nature.

“[For] some cultures and communities, it’s hard. A book may raise questions that that community is not ready to deal with. Maybe they don’t even know how to deal with it,” English teacher Suzette Henry said. “How do you talk about the ugliness that a society has ignored or set aside?”

Even books like the Harry Potter series were once challenged because they mention witchcraft.

“I absolutely love the Harry Potter series. I think it’s a great escape for everyone,” librarian assistant Victoria Fisher said. “But if you’re in [a certain] community and you feel very threatened by that idea, you can see how you would want to shelter your kids from it.”

Over time, however, the values of a community can change or adapt, making the previously banned books permissible to read. The history of books like The Great Gatsby illustrate this point.

“The Great Gatsby was banned when it came out in 1925, but now it’s a high school classic,” Fisher said. “Same with In Cold Blood. Now they’re books that high schools feel that students really need to encounter and wrestle with.”

Henry believes that in order to understand these stories, both authors and readers need to take an introspective journey.

“I think when an author is brave enough to put that kind of story on the page, whether it’s The Adventures of Huckleberry Finn or The Hate U Give, or Bless Me Ultima, it’s an act of courage, because the author has to have come to some kind of reckoning within themselves,” Henry said. “Then, the reader, when they read it, in their minds are like ‘what is happening here?’  You as the reader, are going to grapple with this, and it doesn’t leave you.

Henry and Fisher both believe that thinking about these banned books offer readers new perspectives into controversial topics or past time periods.

“You can surprise yourself with seeing ‘Wow, this character struggled through this, how did they learn how to work through that situation or environment?’ without having to go through such an experience in real life,” Henry said. “It’s kind of like the old school simulation. You don’t need the hardware and all this other stuff, just the books.”

These perspectives, as Fisher put it, can help readers learn more about the world and about themselves.

“If you’re wrestling with ideas personally, it’s great to find books that may have characters who experienced similar things, and so it gives you a touch point for how to manage the feelings and how to deal with them,” Fisher said.

In this digital age, where technology may be preferred over books, Henry argues that reading books, especially controversial books, is more important than ever because of the crucial insight they provide.

“Those who are fearful that books are going away– that’s not the case. I think, depending on who you talk to, books are more relevant now than ever because they bring up the possibility of these different ideas.” Henry said. “But it’s really the readers who connect the books and the ideas, and if you have people who are doing it thoughtfully. It really can change things.”

Interested in reading some of these banned works? Check out the Jefferson library’s collection on their website!