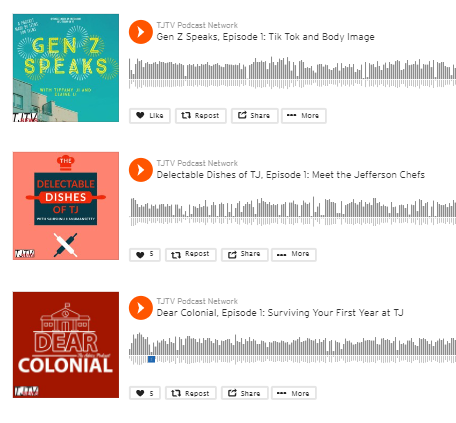 “These podcasts are ultimately a tool to help promote community cohesion and bring people together over a narrative,” Ochiai said.

The first of these podcasts, Dear Colonial, is hosted by seniors Tiffany Ji and Pratika Katiyar. It will serve as a virtual advice column where the hosts will address questions from the community about navigating Jefferson.

“Not only is it entertaining but it provides insight into how things function at Jefferson and how my experiences were shaped throughout the years,” Katiyar said. “It can prove especially useful to underclassmen who are just starting to get into the groove of Jefferson and it might ease some doubts they may have.”

Though navigating Jefferson may not be on the menu for Delectable Dishes of TJ, navigating intimidating dishes is. Hosted by sophomore Sahishnu Hanumasetty, the second podcast of the network will not only help listeners create beautiful dishes but will also feature the Jefferson chefs behind them.

“With all the doom and gloom around, this podcast is a nice distraction to talk about the things in life that make us happy, food for one,” Hanumasetty said.

Along with advice and food, the network will be covering pop culture. Ji will also be working with junior Elaine Li to host Gen Z Speaks where they’ll discuss random, but relevant pop culture- from anime to gaming to toxic Tiktok culture, as well as often feature student opinions.

“I like to think of it as being laid-back and relatable; just a few teens voicing their thoughts on certain issues and having fun with it,” Li said. “Some podcasts nowadays are pretty structured, and deal with heavier topics, but I hope Gen Z Speaks can function as a break from all of that.”

The first two episodes of each of the podcasts have already been released on Soundcloud here. Check out the trailer below for more information and be on the lookout for new episodes every two weeks.