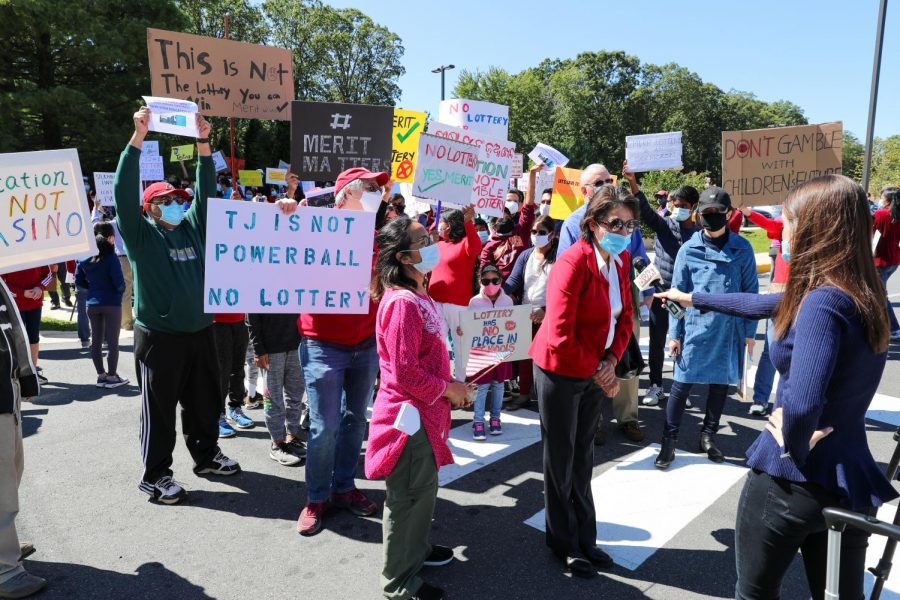 Following the announcement of a potential change to Jefferson’s admissions system, parents, students, and other stakeholders rallied on the Jefferson sidewalks on Sunday, Sept. 20. Protestors called the proposal, which outlines a “merit lottery” system, unfair, and expressed concerns about the future of Jefferson.

“I understand the intention, but I’m concerned that it’s not the right solution,” Yuyan Zhou, parent of two Jefferson graduates said.

The protest, organized by Coalition for TJ, featured speakers and signs that read “don’t gamble with our children’s future!”, “don’t implement half-baked solutions!” and “TJ is not Powerball”. Some questioned the efficacy of the proposed merit lottery.

“I believe that the goal of increasing the number of disadvantaged students at [Jefferson] has been lost and has been substituted with a misplaced effort to eliminate standardized tests at all costs to have change for change sake,” Glenn Miller, parent of a Jefferson student, said. “The merit lottery will not effectively select the best and brightest STEM students and instead will result in more average but not great students at [Jefferson].”