Let’s cool down, stay inside, and talk about a few good movies. 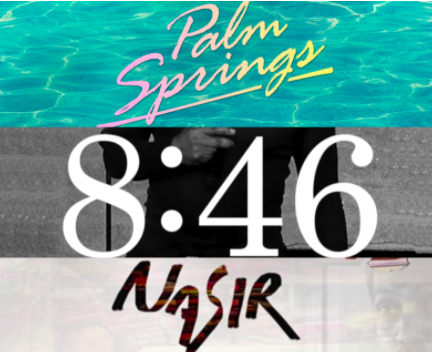 Since I’m right off the tail of reviewing something really old and heavy, I’ve decided to take it easy for a week and quickly go through three films that I’ve scrapped reviews for. I’m going to try to keep each review short, and while I don’t think any of these are masterpieces, I think they’re all special enough that I would happily recommend them.

“Palm Springs” (2020): Wait? A good comedy? In 2020?
I was shocked at the quality of “Palm Springs!” I didn’t expect going into a Lonely Island production, which is known for more goofy movies like “Popstar: Never Stop Never Stopping” (2016), to get a smart and surprisingly heartfelt comedy. It’s a time-loop comedy along the lines of “Groundhog Day” (1993), but the rom-com twist felt enjoyably fresh and natural, and I hate rom-coms! I thought that the performances were a bit hit-or-miss, with Andy Samberg not being able to carry a dramatic scene, but J.K. Simmons and Cristin Milioti did a great job with the material they were given. Admittedly, the movie is at it’s best when it isn’t taking itself too seriously, and the dramatic moments often fall flat due to Samberg’s aforementioned performance. The visuals aren’t anything to write home about, but I was surprised by the number of interesting frames, which are incredibly unusual in modern comedies. I understand why you wouldn’t want to get Hulu to see this movie, but if you’re willing to schedule the end of your free trial ahead of time, then be sure to check this one out!

“8:46” (2020): An incredibly intimate stand-up special which transcends the medium.
“8:46” is a great stand-up short from one of the best comedians working today, Dave Chappelle, where he discusses his thoughts on the death of George Floyd. He covers his reaction to the events themselves, while also addressing his connections to events surrounding and relating to it, and it’s probably the only piece of media covering Floyd that doesn’t sensationalize his death. This special is angry in a way that I haven’t seen in his previous work. Chappelle has never hid from discussing controversial topics, but in this, he is so affected by the subject matter that he can’t joke about it in the same way. Dave Chappelle proves himself yet again to be the next George Carlin, propping up his amazing comedic talents with real messages that will stick with you; subverting comedy tropes in a similar vein to “Hannah Gatsby: Nanette”. I know you have 30 minutes, just go see it on YouTube.

“Nasir” (2020): A cry for decency in a radicalized society.
I discovered “Nasir” while it was premiering in the US at the “We Are One Film Festival” put on by YouTube near the beginning of the pandemic. It was a highlight of the festival, and it still stands as my favorite movie of the year. “Nasir” follows the titular character – played brilliantly by Valavane Koumarane – who is a Muslim living in a part of India where he is the minority. It’s a quiet film that really lets you soak in the details of his world, which is complemented by stunning camerawork. I’m always skeptical when a movie has a 4:3 aspect ratio because it’s a very “film student” sort of move nowadays, but it does a great job making the film seem very “homey”. The tragedy of Nasir’s life is that even though he is a good man – he takes care of his mentally deficient nephew, he does chores for his coworkers, he writes bad poetry – he lives in a society that pushes him down because of his religion, which he’s too scared to even mention in public. The only time he’s really at peace is when he’s at a local Mosque in secret, where he can forget about his poverty and oppression for the brief time he can pray. “Nasir” is a wonderful humanist film, with one of the best endings of the year by far, and you should try to find it whenever it gets a wider release.