“Earth and Blood”: or, How to make a boring action movie 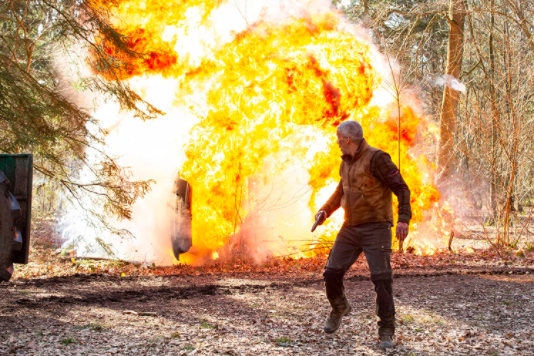 When I watch an action movie, especially a straight-to-Netflix action movie, I need very little to walk out satisfied. Obviously good action is a must, but just as important as that is good structure, filmmaking, and characters. Unfortunately, I got none of those things while watching “Earth and Blood”, Julien Leclercq’s 2020 installment in a long line of generic action movies, which I am already struggling to remember mere hours after watching it. Because of how unremarkable “Earth and Blood” was, this review will serve less as a reason for you to watch this movie and more as a lesson in how good action movies are made.

“Earth and Blood” is a French film about an aging man who wants to sell his lumber mill, and then a group of gangsters tries to kill him because one of his employees hid some drugs there without his knowledge. You might think that the use of “and then” in the description might not be fair, but it’s completely justified. The main conflict of the movie, that being the gangsters who want to kill a guy, has little to no connection to the main character, which is already a big problem. In a good action movie – or in any good movie- the main character should have stakes in the conflict essentially from the beginning. Take “The Raid” (2011), one of the better action movies in recent memory. That movie follows a cop trying to take down a building full of drug dealers, and even with such a simple premise, it’s miles better than “Earth and Blood’s”, because it puts the main character right into the conflict from the beginning.

Of course, a flimsy premise can at least be saved by good writing. Unfortunately, even on a structural level, the movie fails at this. “Earth and Blood” clocks in at a pitiful 80 minutes, but feels longer because it doesn’t introduce things at nearly the pace that you need for such a short script. With an 80 minute movie, you need to have a real action scene almost immediately to set the tone. In “Earth and Blood”, the opening scene is a slightly botched robbery from somewhere, presumably a police station, that’s about as exciting as filing tax returns. This, along with the scenes after it, set the tone of a subdued crime movie rather than an action movie, which it only becomes during the second half of the movie. The movie doesn’t even introduce the villain until 20 minutes in, which is far too long when the film is just 80 minutes. This leads me to the characters, who are all so bland that I won’t even devote a paragraph to them. Each one is about as stereotypical and underwritten as characters get, and the only twist is that the damsel in distress, in this case the protagonist’s daughter, is mute.

This leads me to the visuals of “Earth and Blood”, which are by far the weakest element. For one, the color and lighting are terrible. Just about every shot is dark and brown, which along with being generally irritating to look at, also makes the action even less clear when combined with its poor sound design, editing, and cinematography. Speaking of which, the framing is consistently poor, with not enough emphasis being placed on the things that matter most in any given frame. When the protagonist of an action film has a shotgun that’s canonically very powerful, the filmmaker has to make sure to make it clear from the framing, which Leclercq does not do. Every gun has equally little importance visually, which contributes to the general lack of clarity the action scenes have. That’s not even mentioning the editing, which is so poor at points that when a car flipped over and exploded in a chase, I couldn’t even tell when and what caused it to happen. This is confounded by a general overabundance of cutting, which keeps a consistent pace throughout the entire film when it should slow down during calm moments and speed up during action set pieces as a general rule.

In the end, “Earth and Blood” fails to deliver in all the basic ways that create a good action movie. It’s bad enough that you won’t enjoy it if you want a good film, but not so bad that you can’t enjoy it through pure schadenfreude. This almost makes it the worst type of movie, that being one that’s completely forgettable. Just go watch “Die Hard” (1988) instead.