Does “Hamilton’s” VOD release live up to its mythic hype?

Reviewed by a guy who hadn’t watched the play or listened to the soundtrack before watching the movie. 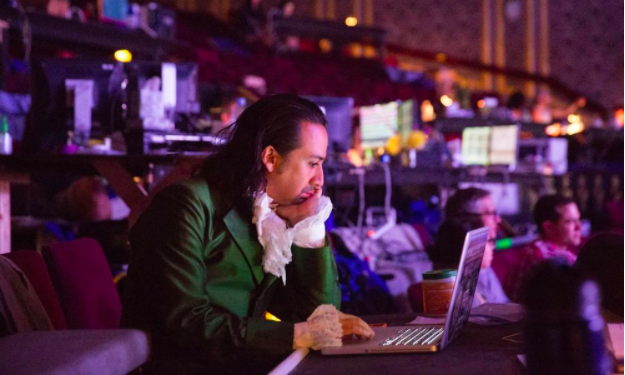 “Hamilton” is a show that needs no introduction. Lin-Manuel Miranda’s alchemic hip hop-jazz-R&B-historical epic has become so ubiquitous with pop culture that most people who wanted to see the show on Broadway already loved it before they stepped foot in the theater. Overall, “Hamilton” as seen on Disney+ is very good but deeply flawed. While some of my issues, like how I don’t care for some of the more conventional songs, can be chalked up to personal taste, I think that there are serious problems in both the original musical and especially the cinematic adaptation. But before I lose all of my meager credibility as an amateur film critic, I’m going to run over some of the many positive things I have to say.

For one, the music is excellent. Aside from a couple of duds, each song is packed with originality and style, and the instrumentals are almost always incredible. The soundtrack also employs the use of numerous leitmotifs⁠—musical themes associated with a specific idea, situation, or person⁠—each of which are catchy and cleverly help keep track of the enormous cast. Speaking of which, the cast is excellent. Each actor, with the notable exception of Phillipa Soo (as Eliza Schuyler Hamilton) who sounds horribly generic in contrast to the rest of the cast, does a phenomenal job with their material. I was especially impressed with Okieriete Onaodowan, who played both Hercules Mulligan and James Madison, two characters who have some of the best and most diametrically opposed minor roles in the show.

The work onstage was also incredibly impressive. The lighting is as highly stylized as the soundtrack and does a remarkable job of keeping the main characters distinct in a sea of ensemble cast members. This is also helped by the choreography, which, barring the underwhelming King George III segments, is impeccable. Just about every song had a moment where what must have been 40 ensemble dancers came on stage to bring them to a fiery conclusion.

This actually leads me to my first big complaint with the musical itself. For most of its 46 songs, “Hamilton” feels the need to crowd up what could be intimate emotional songs with so much movement that it was distracting at times. This formula of the musical numbers ramping up near the end was common enough that it actually bothered me. Some of the songs with higher concepts like “Satisfied” have to have complex choreography, and they’re the high points of the show. But trying to make so many moments of the show the high point is excessive and tiring.

I also think that some of the characterization was iffy. A significant portion of “Hamilton’s” runtime is dedicated to people pointing out how amazing Hamilton is, but so much of his accomplishments don’t seem earned. Additionally, Hamilton is supposed to be a flawed character, but almost every time he has a character flaw, it’s essentially treated as some sort of burden that’s placed on him rather than a problem about himself that he has to deal with. There’s also a strange historical omission of James Monroe, which actually hinders a crucial plot point that contributes to Hamilton’s downfall.

While these frustrations bothered me, they didn’t hold a candle to what I really think held “Hamilton” back from being a great movie, that being the presentation of the film itself. The camerawork is without style, and the editing is excessive. It never felt like the director of the film had any confidence in his frames, shooting tons of coverage over three separate performances of the show. The sheer amount of footage that was shot probably was the reason for the over-editing. There were so many times in this movie where it was just one character singing, and instead of holding the perfectly good close-up shot of the actor, there was an unmotivated cut every couple seconds.

While I don’t think I would dare say that the presentation of “Hamilton” was bad, it just felt like it was unconfident in itself, and really lacked personality overall. Compare this to the king of live-performance films, “Stop Making Sense”, which regularly uses dynamic long-takes and clever framing to create one of the most enthralling cinematic experiences ever, even though you’re just watching a “Talking Heads” performance. Of course, the difference between “Hamilton” and “Stop Making Sense” is that the latter, is directed by Jonathan Demme, a real director who made both “Philadelphia” and “Silence of the Lambs”, while for “Hamilton”, Disney hired Thomas Kail, who has only ever directed other stage-show adaptations, because modern Disney is the antithesis of style.

In conclusion, “Hamilton” is a great stage musical, but I don’t think it’s a great movie. But by no means should that stop you from seeing it. While I think that some of the appeal of the musical has been lost on me, it’s impossible to deny the cultural significance of “Hamilton”. And while I rarely have the desire to financially support Disney, one $6.95 ticket for your whole family to watch the show for an entire month is an irresistible deal compared to one $695 ticket for a single person in a bad seat. Go see it!