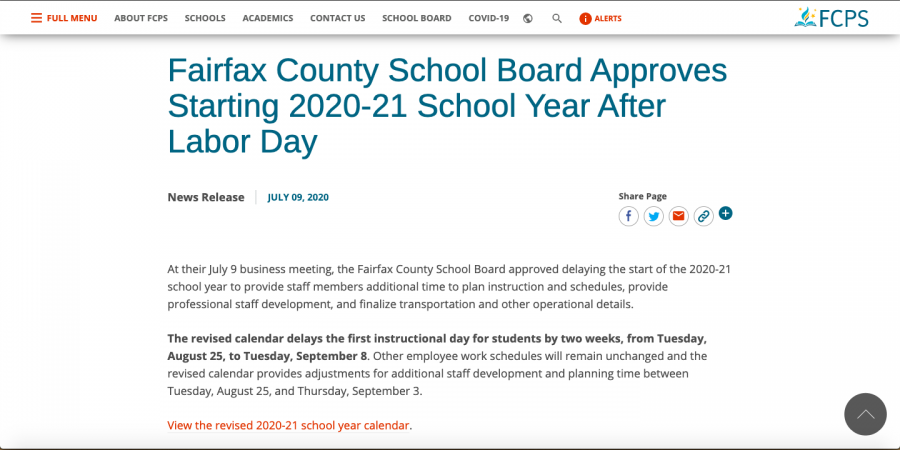 After its school board meeting on July 10, FCPS announced the delay of the school year by two weeks.

After the Fairfax County Public Schools’ (FCPS) school board meeting on Wednesday, July 10, the school board announced FCPS’ decision to delay the start of the school year by two weeks, with a new starting date of Sept. 8. In a news release by FCPS, they stated that the purpose of the delayed start was to allow staff members to have more time to plan instruction and schedules in addition to finalizing transportation plans.

During the school board meeting, multiple board members acknowledged that although the delay was suboptimal for a return to normalcy, it was necessary to ensure the safety of school students and staff alike.

“It’s [the decision] one that I believe all 12 of us on the board are wrestling with knowing the impact it has, especially how much we want our children to get back into school, but we absolutely have to get this right,” school board member Megan McLaughlin said during the meeting.

Junior Sung-June Kim thinks that while the decision to delay the start of school was a good one, it also shows that FCPS is still uncertain about its plans.

“During such confusing times, I respect decisions made by the school board, though it seems like the school board seems just as concerned and hesitant about going back to school as the parents and students,” Kim said. “The action seemed to communicate a troubled or divided agreement on returning to school which is completely understandable.”

The full announcement from FCPS, along with the new 2020-2021 school year’s calendar, can be found here.