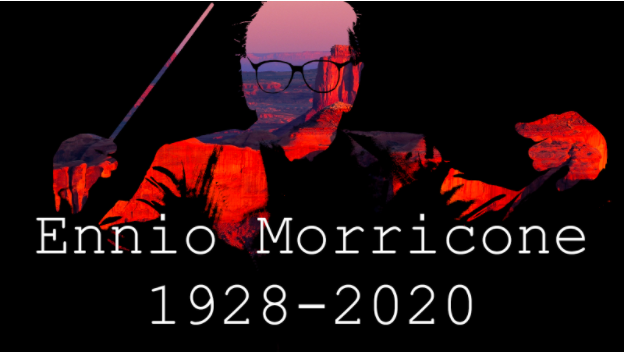 You very well may not have seen “The Good, the Bad, and the Ugly”, but you sure as hell have heard it. You might not have heard of Ennio Morricone before you heard about his death, but you’ve heard his magnificent compositions here, here, and here, to name a few. Morricone was a man who consistently created icons of pop culture, and practically invented the modern idea of the wild west. And even though most people will never be able to listen to his entire 353 film career, I can certainly try to explain what made him so important.

It’s strange that for as integral to American culture the Western is, when you think of the wild west in pop culture, you don’t imagine the soundtrack for an American Western. That’s because the modern image of a western is distinctly Italian in its origin. The American Western used to be like modern superhero movies; they had huge budgets and stars, and powerful orchestral soundtracks to carry them. The American Western was often about the strong, noble cowboy, trotting along the frontier making a name for himself by killing bad guys and Indians; and the hero had to have a suitably heroic score to appeal to the American market. Knowing that, it’s actually quite clear why the American Western isn’t ingrained in the cultural consciousness. Modern audiences don’t idealize the actions of frontiermen anymore, so a genre dedicated to the sanitization of America’s past just isn’t accepted anymore.

So what made the Italian, or Spaghetti Western so different? Simply put, the budget. The story of the classic Spaghetti Western is one rooted in restrictions, and the stars of that story are Sergio Leone and Ennio Morricone. Leone’s “A Fistful of Dollars” was not a massive tale about colonization and heroism like his American contemporaries, but rather a shameless rip-off of Akira Kurosawa’s “Yojimbo”; a story of two gangs fighting over one town, and a nameless gunslinger (Clint Eastwood) who wants to see what happens. To accompany this small-scale story was a meager budget of $200K, which meant that instead of utilizing a full orchestra, Morricone had to get creative to fit the tone. Instead of large strings sections, Morricone used an electric guitar, instead of traditional brass, he used vocalists, and instead of normal percussion, he’d use whip cracks, bells, and even gunshots. This ultimately worked in Morricone’s favor, because replacing a huge, sanitized orchestra with the sounds of the west added much needed grit to the soundtrack, which complemented the morally ambiguous actions of the main characters.

But pioneering the sound of the Spaghetti Western wasn’t the only thing that made Morrione so iconic. When he worked with Sergio Leone, Morricone would write the score before the shooting began. This allowed Leone to provide something that most actors would never have the luxury of experiencing, being that they would be able to hear the music that was composed specifically for them while acting. Morricone’s scores were so integral, because they’d not only dictate how people would act, but how setpieces played out, and even how the camera would move. This provided Leone’s western with a sort of lyrical property that still is rarely seen. This leads to what is probably the most important part of Morricone’s work: the leitmotif.

In film, a leitmotif is a musical theme associated with a specific idea, situation, or person. Morricone was the king of leitmotifs. His most famous ones are probably the themes for The Good, The Bad, and The Ugly; but for my money, they’re used at their best in “Once Upon a Time in the West”. In “Once Upon a Time in the West”, each character has its own unique theme, which is constantly reincorporated in new ways to fit the tone of the scene. The most powerful use of this is with the characters of Harmonica and Frank, who have the most similar themes of the cast, alluding to an unknown past that is one of the key plot points of the film. This use of leitmotif comes to a head in the final duel between the two, which almost combines their themes into one of the most exhilarating final duels in movie history.

I’ve spent most of this article talking about Morricone’s work in the western genre to keep things concise, but that’s not to say that he didn’t have range. Morricone did masterful work on hundreds of films, including “The Thing”, “Cinema Paradiso”, “Once Upon a Time in America”, and countless other lesser-known Italian films, and he wielded immense power throughout his entire filmography. There have been very few composers so essential to their filmography as Ennio Morricone, and now that he’s gone, films might as well be silent.