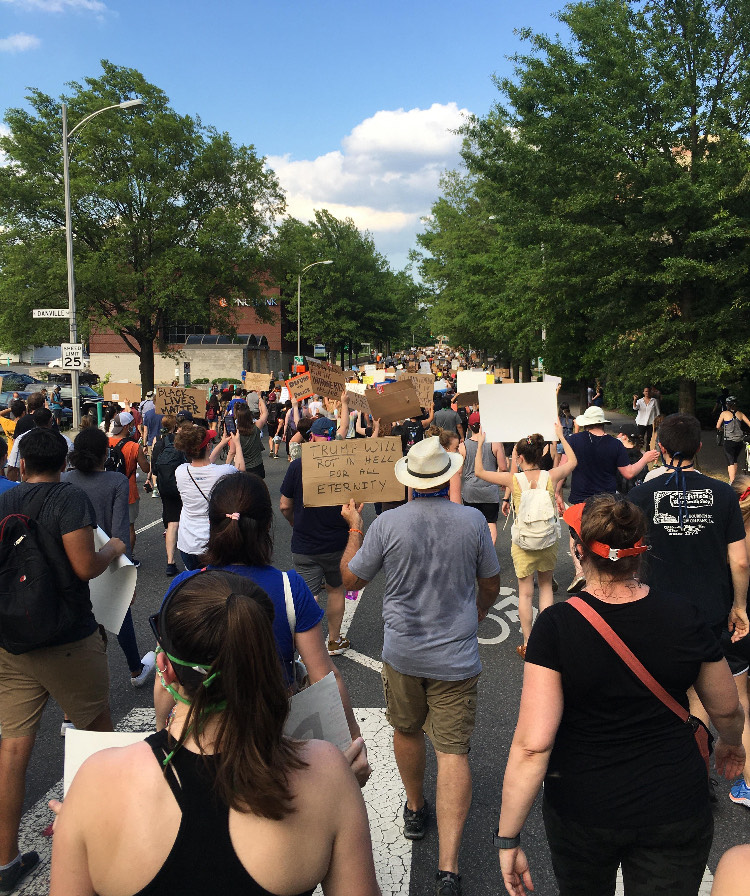 Protesters stand together at a protest in Arlington, holding up signs and marching peacefully.

Rain or shine, locally and globally, people are standing up to support the Black Lives Matter (BLM) movement, including Jefferson students.

Senior Grace Cullen attended several protests in Arlington and Fairfax City to join the BLM movement. Her personal beliefs in equal rights motivated her to join.

“The most stressful thing for me about life is when people hate someone else for something that person can’t control,” Cullen said. “Black Lives Matter and black equality have always been an issue, but I never knew how to help. Protesting is a way for me to help.”

As an attendee of a June 8 BLM protest in Washington, D.C., sophomore Erin Tran also wanted to show support to the African-American community.

“This isn’t the first protest I’ve been to (I went to the March for Our Lives and Women’s Day marches) so it’s not uncommon for me to march/protest for the causes I believe in,” Tran said. “I couldn’t support the movement with money for donations and such, so I decided to support it with my time.”

Both found the atmosphere of the protests to be compassionate and supportive, celebrating unity and the unique stories of the protesters. Tran realized that the words of speakers helped her educate herself on the movement and put her struggles into perspective as well.

“The fact that the stories were about actual incidents that happened to the speaker allowed me to further understand (as much as a non-African American person could understand) the scope of the problem and take it to heart,” Tran said. “We heard a story from a man that was scared to drive because he didn’t want to get pulled over. That really made me check my privilege and realize how much easier my life is.”

Listening to the stories of what the African-American community faces on a day-to-day basis, even in Northern Virginia, was an eye opener for Cullen.

“Hearing black people’s stories of the discrimination they faced really was a lesson to me,” Cullen said. “I feel like we live in a pretty welcoming area and I never saw or thought that the discrimination was as bad as other places, but it exists where we live even in the police force and schools.”

Cullen hopes that, from seeing the protests, more people recognize the importance of the BLM movement and that change will be made in response to the show of solidarity.

“People should see how many people want this change and how important it is,” Cullen said. “Black people have been fighting for their rights for years. change hasn’t happened like it needs to and we will keep fighting until equality has really been gained.