“Do The Right Thing”: Spike Lee’s ultimate argument against hate

“Let me tell you the story of Right Hand, Left Hand. It's a tale of good and evil.” 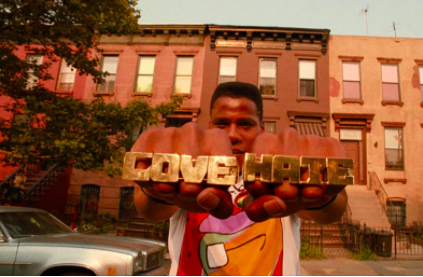 Courtesy of "Do The Right Thing", Universal Pictures

“Bright” (2017) is one film in a long legacy of lazy films about racism, which, like every other film of its kind, can’t help but pin racism down to one or two bad apples, one or two historical events, or at least something logical. The problem with this kind of writing is that it’s fundamentally flawed. Racism isn’t rational. It’s driven by irrational feelings, whether it be fear, hatred, or insecurity. The acknowledgment of this, among an almost innumerable amount of other things, is why I was completely floored with Spike Lee’s 1989 masterwork, “Do the Right Thing”.

It’s difficult to describe an actual plot for “Do the Right Thing” because rather than having forward momentum, the story seems to have horizontal momentum. This is because the story of “Do the Right Thing” is a sociological tale, as opposed to a psychological one. The film takes place over just one day, and there are two important things: it is the hottest day of the year, and a guy known only as Buggin’ Out wants the neighborhood pizza parlor to put pictures of black actors onto its wall of fame, which has been reserved exclusively for Italian Americans. These two things ripple across the neighborhood, and the film follows a huge array of characters as they deal with these things, along with the effects of systemic racism, interpersonal racism, and general irritation.

The characters of “Do the Right Thing” all exhibit dissatisfaction with their lives for whatever reason. Mookie hates that he has a Hispanic bastard son; Da Mayor tries to instill moral advice in a neighborhood that all but disregards him; Pino is a horrible racist who won’t shut up about how much he can’t stand being surrounded by non-Italians; everyone else feels beaten down by something else. This is all compounded by the insane heat of this particular day, which only serves to increase the tension that everyone feels up until the explosive finale.

It’s impossible to talk about “Do the Right Thing” without mentioning its style. The interiors are lit by incredibly hard yellow lights, which produce hard shadows, and often pronounce the innumerable fans attempting to keep the characters cool. The exterior is almost completely devoid of cool colors, and I was consistently impressed by how Lee casually included deceptively complicated long-takes which must have been extraordinarily difficult to coordinate. The framing is also incredibly stylized, often utilizing harsh dutch angles, beautiful silhouettes, and borderline fourth wall breaking monologues. The best example of this would have to be the “Love and Hate” speech from Radio Raheem, who’s wonderfully played by Bill Nunn, which acts as both an extended reference to “The Night of the Hunter” (1955) and a thesis for the whole film.

In “Do the Right Thing”, very little is certain. Every conversation has repercussions, every argument has a counter-argument, and the only concrete fact is that hatred – and in this case, racism – will invariably cause pain. It’s so rare to find an indictment of systemic oppression as simultaneously powerful and approachable as “Do the Right Thing”, and even with some minor pacing issues and slightly overbearing music, is an absolute modern masterpiece. Please go see it as soon as you can.