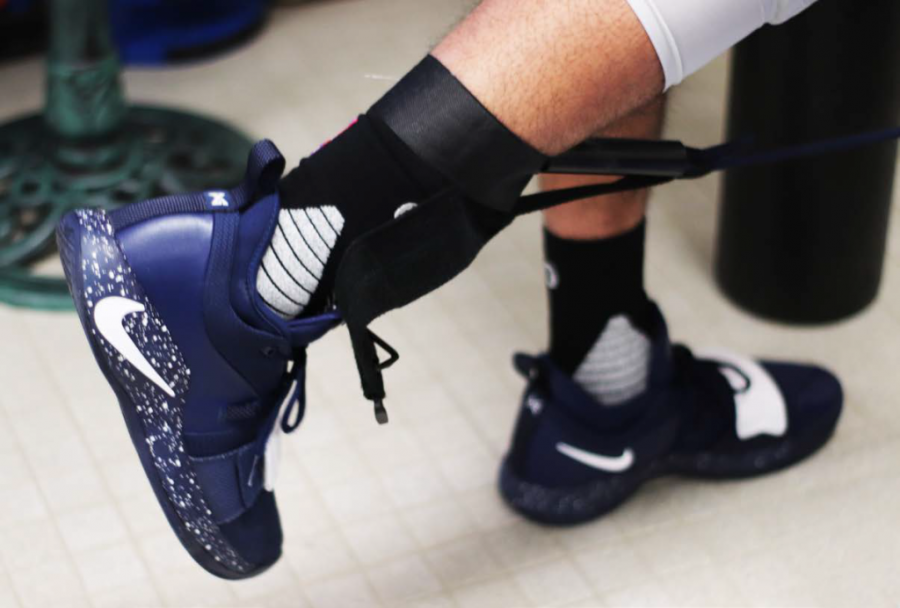 Approximately 2 million injuries. 500,000 doctor visits. 30,000 hospitalizations. According to the U.S. Centers for Disease Control, nearly 30 million American adolescents participate in sports, and a shocking number of these youth athletes get hurt every year. In one moment, one errant step, an athlete’s entire life can change.

One Jefferson athlete whose life was affected by a sudden injury was senior Aaron Wadhwa, who was at a state bhangra team practice when his knee took a sharp twist.

“I jumped up in the air and twisted my leg to the side. I heard a loud pop and couldn’t walk properly,” Wadhwa said.

After being unable to sleep over the night due to the pain, Wadhwa went to the orthopedic surgeon, where the doctor informed him that he’d torn a ligament in his knee and would need surgery.

“They went in and operated on it and they removed a section of my knee,” Wadhwa said. “And so I was on crutches for a while.”

Unlike Wadhwa, senior Danny Kim was not immediately aware of a significant injury when he contracted it. In Jefferson’s second football game of the 2018 season, he was trying to make a tackle and strip the ball out from the hands of an opposing player when his finger bent backwards and gave way.=

“When I first got injured I really didn’t know how serious it was – I thought I’d just jammed my finger and when I went to [Ms. Murphy], I actually just wanted to ice my finger,” Kim said. “But they quickly realized that it was something much more than that.”

Heather Murphy, the athletic trainer at TJ, diagnosed Kim with jersey finger, a condition in which the tendon in his fingers had ruptured. In Kim’s case, it was the tendon closest to the first joint on his ring finger, causing him to miss most of the football season.

“It’s sort of depressing in a way, just knowing that you really won’t play again and watching everyone else practicing, going through all those hard times in games, while I’m just standing on the sidelines, just cheering them on,” Kim said.

Physical therapy was critical for both athletes throughout the recovery process. Working with nearby doctors as well as athletic trainers, Kim and Wadhwa completed stretches and exercises pertaining to their respective injuries.

“I had to go through physical therapy for about six or seven months,” Wadhwa said. “While I was playing basketball and going to practices, I’d play, and it would be a lot of pain. So I’d have to do physical therapy and ice a lot to reduce that.”

As the months passed, the injury subsided, and by Apr. 2018, Wadhwa was no longer feeling pain from the ligament tear. Wadhwa continued to wear a knee brace for athletic activity until a dance performance in Jul. 2018, when he finally removed the support.

“I was the captain of a dance performance and so that was really refreshing because I think it was the anniversary of the injury. That was like, really, a good point for me because I [had] completely recovered and didn’t feel that pain anymore,” Wadhwa said.

Kim, on the other hand, experienced far more uncertainty in a short period of time.

“My doctor told me I’d be out for the whole season. Ms. Murphy told me that it would be very unlikely that I’d play again — I was still hopeful but that was what everyone was telling me — that I wouldn’t play again,” Kim said.

Close to the end of the six weeks, Kim found out his season was not over yet when his doctor cleared him to play the last two games of the football season with his splint. Murphy padded his splint to prevent his tendon from rupturing again. On Kim’s return, the Colonials went on to win their Senior Night game 28-0 and end the season on a high note.

“Knowing that this is probably the last football I’m going to play in my life, it meant a lot,” Kim said. “That we did it all together, the seniors, and all the underclassmen that played, it just made the experience a lot better.”

Although the injuries led to consistent setbacks and frustration, they also brought about positive adaptations in each player’s game.

“The biggest thing I saw [change] in my game was probably patience. Just me doing physical therapy every single day, taking forever. Even if day 30 physical therapy doesn’t feel good, day 31 might be better,” Wadhwa said. “It taught me that patience is really important and so I saw that evolve in my game too because I’ll be patient with what I do on the floor.”

Ultimately, both injured and healthy athletes are advised to maintain their physical conditions for their respective sports.

“One of the best ways to prevent injuries is to be strong and flexible,” Murphy said. “Do not play a sport to get in shape, get in shape to play your sport.”