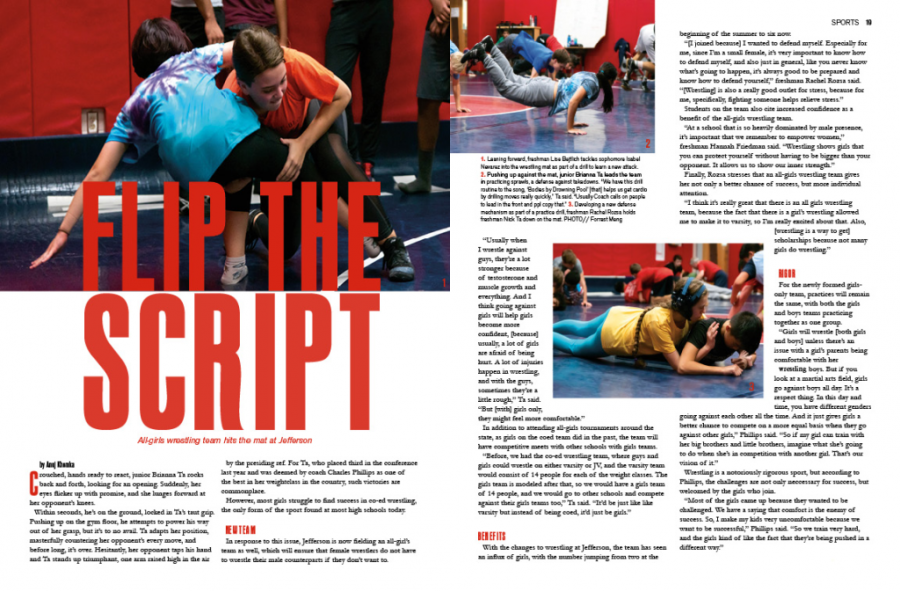 Crouched, hands ready to react, junior Brianna Ta rocks back and forth on her right foot, looking for an opening. Suddenly, her eyes flicker up with promise, and she lunges forward at her opponent’s knees.

Within seconds, he’s on the ground, locked in Ta’s taut grip. Pushing up on the gym floor, he attempts to power his way out of her grasp, but it’s to no avail. Ta adapts her position, masterfully countering her opponent’s every move, and before long, it’s over.

Hesitantly, her opponent taps his hand against the mat, and Ta stands up triumphant, one arm raised high in the air by the presiding referee.

For Ta, who placed third in the conference last year and was deemed by coach Charles Phillips as one of the best in her weight class in the country, such victories are commonplace. However, most girls struggle to find success in co-ed wrestling, the only form of the sport found at most high schools today.

In response to this issue, Jefferson is now fielding an all-girl’s team as well, which will ensure that female wrestlers do not have to wrestle their male counterparts if they don’t want to.

“Usually when I wrestle against guys, they’re a lot stronger because of testosterone and muscle growth and everything. And I think going against girls will help girls become more confident, [because] usually, a lot of girls are afraid of being hurt. A lot of injuries happen in wrestling, and with the guys, sometimes they’re a little rough,” Ta said. “But [with] girls only, they might feel more comfortable.”

In addition to attending all-girls tournaments around the state, as girls on the coed team did in the past, the team will have competitive meets with other schools with girls teams.

“Before, we had the co-ed wrestling team, where guys and girls could wrestle on either varsity or JV, and the varsity team would consist of 14 people for each of the weight classes. The girls team is modeled after that, so we would have a girls team of 14 people, and we would go to other schools and compete against their girls teams too,” Ta said. “It’d be just like like varsity but instead of being coed, it’d just be girls.”

With the changes to wrestling at Jefferson, the team has seen an influx of girls, with the number jumping from two at the beginning of the summer to five now.

“[I joined because] I wanted to defend myself. Especially for me, since I’m a small female, it’s very important to know how to defend myself, and also just in general, like you never know what’s going to happen, it’s always good to be prepared and know how to defend yourself,” freshman Rachel Rozsa said. “[Wrestling] is also a really good outlet for stress, because for me, specifically, fighting someone helps relieve stress.”

Students on the team also cite increased confidence as a benefit of the all-girls wrestling team.

“At a school that is so heavily dominated by male presence, it’s important that we remember to empower women,” freshman Hannah Friedman said. “Wrestling shows girls that you can protect yourself without having to be bigger than your opponent. It allows us to show our inner strength.”

Finally, Rozsa stresses that an all-girls wrestling team gives her not only a better chance of success, but more individual attention.

“I think it’s really great that there is an all girls wrestling team, because the fact that there is a girl’s wrestling allowed me to make it to varsity, so I’m really excited about that. Also, [wrestling is a way to get] scholarships because not many girls do wrestling.”

For the newly formed girls-only team, practices will remain the same, with both the girls and boys teams practicing together as one group.

“Girls will wrestle [both girls and boys] unless there’s an issue with a girl’s parents being comfortable with her wrestling boys. But if you look at a martial arts field, girls go against boys all day. It’s a respect thing. In this day and time, you have different genders going against each other all the time. And it just gives girls a better chance to compete on a more equal basis when they go against other girls,” Phillips said. “So if my girl can train with her big brothers and little brothers, imagine what she’s going to do when she’s in competition with another girl. That’s our vision of it.”

Wrestling is a notoriously rigorous sport, but according to Phillips, the challenges are not only necessary for success, but also welcomed by the girls who join.

“Most of the girls came up because they wanted to be challenged. We have a saying that comfort is the enemy of success. So, I make my kids very uncomfortable because we want to be successful,” Phillips said. “So we train very hard, and the girls kind of like the fact that they’re being pushed in a different way.”