‘Wind of Change’ Podcast Review: A journey of suspense and intrigue 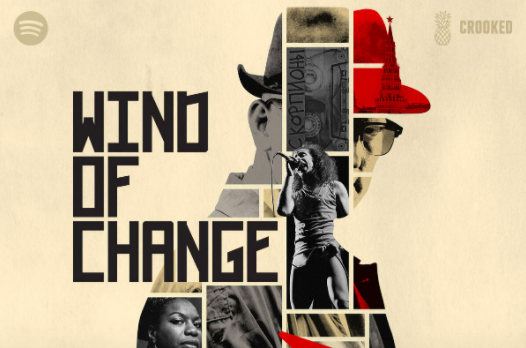 For the longest time, I never could grasp what was so alluring about listening to a podcast. I definitely did not believe any investigative podcast series could deliver the same suspense and intrigue as a television thriller. And then I discovered Wind of Change.

In 1991, Scorpions, a German rock band, released a song titled “Wind of Change”. The song celebrated the collapse of the Berlin Wall and the fall of the Soviet Union, calling for a time of peace and transparency from the new government. The power ballad became an unofficial anthem for change across Europe, and is one of the best-selling singles of all time today. But what if I told you that it might not have been the Scorpions who wrote the song, but rather the CIA?

There is no need to sugarcoat the premise of New Yorker investigative journalist Patrick Radden Keefe’s new eight-episode series to make it seem enticing. The series, which starts with Keefe’s account of a rumor he once heard about the CIA writing “Wind of Change”, follows his efforts to find if there is truth to that rumor. After listening to the first episode, any misgivings I had about the series evaporated. And each subsequent 50 minute episode lived up the expectations.

Keefe’s narration highlights how he meticulously probed into each lead, taking him down a rabbit hole of the history of covert actions taken by the CIA during the Cold War. The series asks its audience to consider how propaganda, particularly pop culture propaganda, has affected their lives: is the idea that the CIA uses pop culture to its advantage really so absurd? Keefe describes several instances of this in history, including the operation to disguise six Americans stuck in Iran during the 1979 crisis as members of a Canadian film crew, detailed in the movie Argo.

The series also conveys Keefe’s hesitation with going too far; “Wind of Change” holds significant sentimental value for people across the globe, and falsely telling them that it may have been just another form of American propaganda would not please them. Furthermore, Keefe wonders if his reporting itself is a form of propaganda for the CIA. After all, everybody loves a feel-good American story. My one complaint is that the plot becomes slightly difficult to follow because of the sheer number of players involved and the complexity of the plot. However, the fact that the story has several “plot holes” actually gives the reader a glimpse into the work of an investigative journalist, and how they work to fill the holes.

As the series progresses, Keefe interviews several former CIA agents, a Russian fixer, and a hobbyist who had heard the exact same rumor. Keefe also speaks with Doc McGhee, the Scorpions music manager, who mysteriously made a deal to escape several years of prison time after being convicted for drug smuggling. The series culminates in an interview with Klaus Meine, the frontman for the Scorpions, where Keefe confronts one of the only people who may know the truth.

The music incorporated into the episodes adds to the mystery and makes the experience even more enjoyable. Wind of Change captures the thrill of investigative journalism, and Keefe’s passion and desire to uncover the truth is palpable. This series is well worth the listeners time, and will prove to be an exciting listen.

Note: As each episode forewarns, this series may have some themes and language that are inappropriate for young audiences.