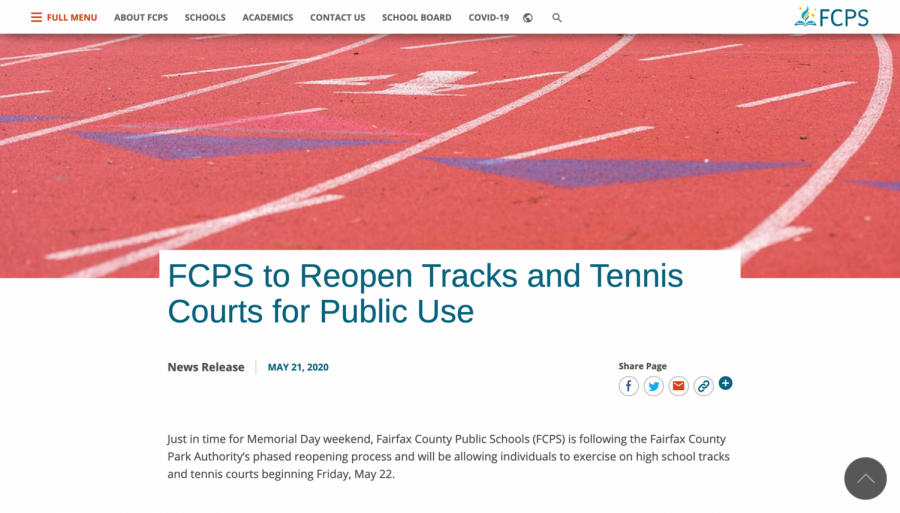 “People are already outside and exercising so I don’t think it will cause more people to leave their houses than are already out. Maybe it will be good for people to have a designated spot to run instead of sprinting past walkers on the sidewalk,” sophomore Annika Topchy said.

Students and individuals will be allowed to use school tracks and tennis courts again beginning on Friday, May 22.

“The gate at Woodson High school track is open so there’s been a decent amount of people there and it hasn’t really affected us. But before we found Woodson I lost motivation to practice because it was so frustrating not having a track to run on and not being able to see the exact distances I’d be running,” sophomore track and field runner Annika Topchy said. “I started training with my old nationals group a few weeks ago at Woodson high school. It’s only three of us right now so it’s really easy to keep lots of space apart while still being able to push each other. It’s important that we practice together since we’re training as a relay team for nationals which is scheduled for mid July as of now.”

Although team activities such as practices and games are not allowed at this time, this new decision brings new ways for people to exercise and get out of their homes after a long break. Fairfax County Park Authority has kept their parks and parking lots open, along with amenities for golf, fishing, open space, disk golf, tennis courts, skate parks, and outer equestrian rings. They have announced, however, that pools will not be opening this summer.

Re-opening tracks provide exercise and a safe way to get out, but there are still some concerns on the effects this reopening will have on the mindsets of others.

“I’m worried kids our age will take this as the pandemic is over,” Topchy said. “I have a lot of friends that have already started hanging out with each other and going outside. They don’t realize that nothing has changed and the virus is still out there. You can still get it and spread it. We’re still required to keep social distancing and not hang out with people outside of the same household and I don’t think a lot of people our age are realizing that.”