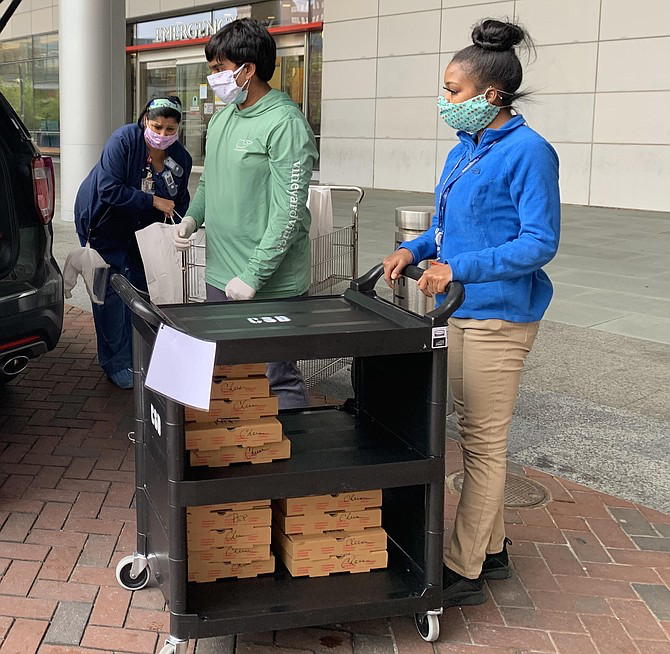 Junior Arul Nigam prepares to bring food into a hospital as part of his initiative ‘Heroes of COVID’. Courtesy of The Connection.

“Ask not what your country can do for you, but what you can do for your country.” Once said by US president John F. Kennedy, this is the mindset junior Arul Nigam kept in mind when he founded Heroes of COVID, an initiative that partners with smaller restaurants to provide meals for hospital workers.

When school got out, Nigam found himself with time on his hands and motivation to help those impacted by the pandemic.

“I noticed that healthcare workers were putting in a ton of work for combating this virus. And I found that restaurants were also suffering. I realized if we use donations to get these meals from the restaurants, obviously that will help them because they’ve lost so much business during the time. And at the same time, it’ll help health care workers,” Nigam said.

Nigam previously founded another organization which also worked with local businesses. This experience was helpful in launching Heroes of COVID.

“I actually had a different nonprofit organization where I was working with local businesses too, for charitable events through them,” Nigam said. “So since I had some experience in that and some connections, I was able to refocus and just go from there to develop into what we have right now.

When first developing this initiative, Nigam first tried to identify areas which were most affected by the virus in order to maximize his impact.

“I looked at which hospitals were struggling the most and which were dealing with the most COVID cases. And then in the vicinity of those hospitals, I tried to find small restaurants that were not big like national chains or anything like that,” Nigam said.

Heroes of COVID has reached 17 hospitals in nine different states. So far, they’re in New York, Massachusetts, Illinois, Florida, California, Pennsylvania, Virginia, Maryland, and DC. Although the work is taxing, Nigam feels rewarded by the impact he’s made in people’s lives.

“A lot have reached out and talked about how it was a bright spot in their day. Especially on the roughest days, it was something that really helped them get through it,” Nigam said.

In the future, Nigam hopes to expand the initiative into smaller cities and areas, which are not getting as much attention.

“In some ways, we need to help them [smaller states and cities] more. So currently, I’m trying to look at how we can extend it to more of those smaller areas that are underserved,” Nigam said.

As for other students who also want to give back to their community, Nigam says that although the work is time-intensive, every contribution, no matter how small, is valued.

“So many of us have a lot of valuable skills that we can contribute back to the community. And now of all times, we have a ton of free time, so I think anyone who’s able to should definitely try and share whatever they can to help everyone get through these difficult times,” Nigam said. “If you’re really motivated to do something, and you have the time to do it, you can see through that it happens.”