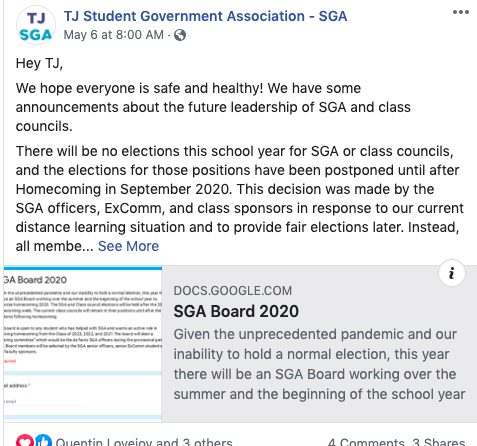 A Facebook post about election format change posted by Jefferson’s Student Government Association. “The new change is going to have some difficulties, but I am confident that the Jefferson students will not be disappointed with homecoming and the other school events,” SGA Treasurer Sean Nguyen said.

Jefferson’s Student Government Association (SGA) is changing the format of the election this year due to the COVID-19 pandemic. The elections will be postponed to after homecoming in September 2020, instead of holding it online.

“As the SGA, we have to be fair and equitable to everyone. This will prevent bias towards people who have more followers on social media or have access to the internet,” SGA President Ronith Ranjan said.

The SGA constitution states that online elections may not be held without access to the school. However, in this unprecedented quarantine situation, there was discussion of making an exception in order to continue the tradition. .

“We first thought of holding the online elections that we would have if school had not closed. The sponsors came back and said that this would not be fair, so we went with this approach,” SGA Treasurer Sean Nguyen said.

The SGA will choose 20 non-seniors to fill in for the SGA board until the next SGA elections. This is a new element added in response to the extended school closure.

“Since we have a lot more input, we are creating a steering committee consisting of four students, but we will still have to figure out how to face the difficulties of multiple opinions,” Nguyen said.

Normally, the students involved in the homecoming planning committee get together at the end of the summer to plan for this major event. The pandemic has created some obstacles for that.

“There is going to be no in-person summer coordination, and it will have to be done online. It is a unique challenge for everyone, but it will allow for a more diverse homecoming,” Ranjan said.

“Even after considering the current circumstances, TJ will still be TJ. That’s what’s most important,” Class of 2023 President Vinay Ayala said.