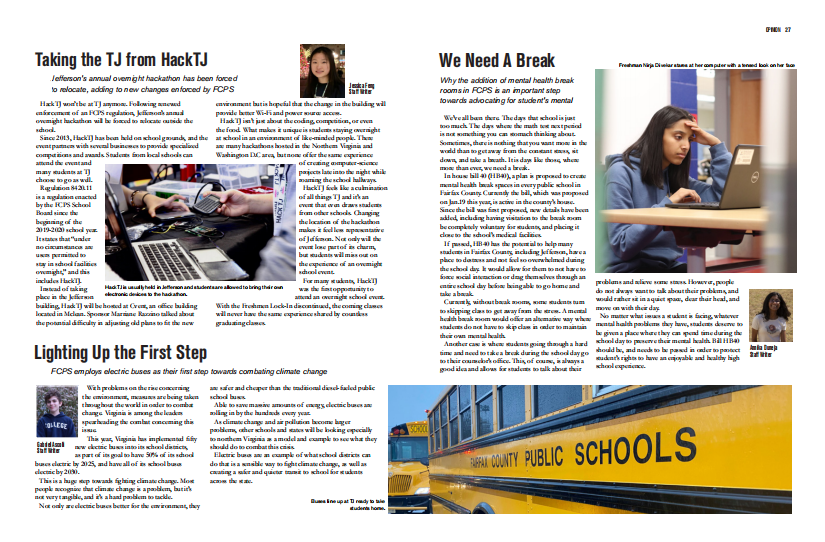 *This article was originally intended to be published in the March 2020 print issue of tjTODAY. With the sudden closure of Fairfax County Public Schools in reaction to COVID-19, we transferred this story to tjTODAY’s online website.

We need a break

We’ve all been there. The days that school is just too much. The days where the math test next period is not something you can stomach thinking about. Sometimes, there is nothing that you want more in the world than to get away from the constant stress, sit down, and take a breath. It is days like those, where more than ever, we need a break.

In house bill 40 (HB40), a plan is proposed to create mental health break spaces in every public school in Fairfax County. Currently the bill, which was proposed on Jan.19 this year, is active in the county’s house. Since the bill was first proposed, new details have been added, including having visitation to the break room be completely voluntary for students, and placing it close to the school’s medical facilities.

If passed, HB40 has the potential to help many students in Fairfax County, including Jefferson, have a place to destress and not feel so overwhelmed during the school day. It would allow for them to not have to force social interaction or drag themselves through an entire school day before being able to go home and take a break.

Currently, without break rooms, some students turn to skipping class to get away from the stress. A mental health break room would offer an alternative way where students do not have to skip class in order to maintain their own mental health.

Another case is where students going through a hard time and need to take a break during the school day go to their counselor’s office. This, of course, is always a good idea and allows for students to talk about their problems and relieve some stress. However, people do not always want to talk about their problems, and would rather sit in a quiet space, clear their head, and move on with their day.

No matter what issues a student is facing, whatever mental health problems they have, students deserve to be given a place where they can spend time during the school day to preserve their mental health. Bill HB40 should be, and needs to be passed in order to protect student’s rights to have an enjoyable and healthy high school experience.

With problems on the rise concerning the environment, measures are being taken throughout the world in order to combat change. Virginia is among the leaders spearheading the combat concerning this issue.

This is a huge step towards fighting climate change. Most people recognize that climate change is a problem, but it’s not very tangible, and it’s a hard problem to tackle.

Not only are electric buses better for the environment, they are safer and cheaper than the traditional diesel-fueled public school buses.

Able to save massive amounts of energy, electric buses are rolling in by the hundreds every year.

As climate change and air pollution become larger problems, other schools and states will be looking especially to northern Virginia as a model and example to see what they should do to combat this crisis.

Electric buses are an example of what school districts can do that is a sensible way to fight climate change, as well as creating a safer and quieter transit to school for students across the state.