An inside look behind the largest performance at Jefferson 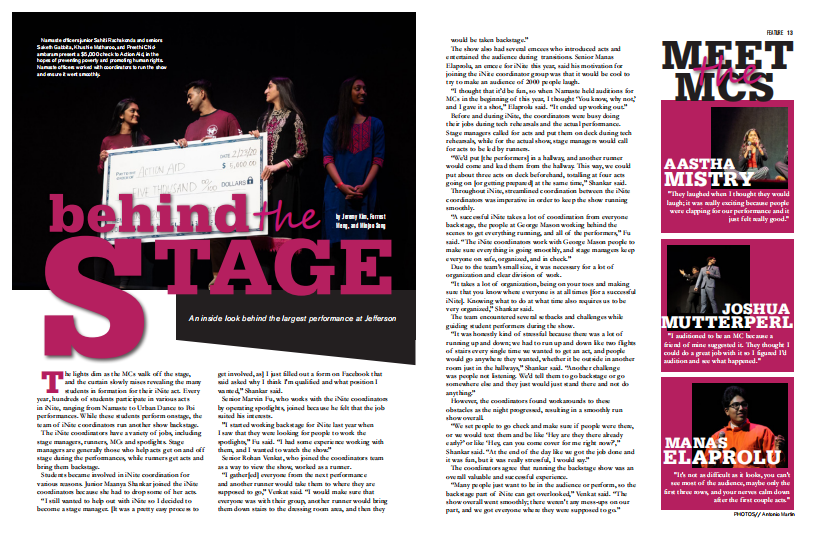 *This article was originally intended to be published in the March 2020 print issue of tjTODAY. With the sudden closure of Fairfax County Public Schools in reaction to COVID-19, we transferred this story to tjTODAY’s online website.

The lights dim as the MCs walk off the stage, and the curtain slowly raises revealing the many students in formation to perform their iNite act. Every year, hundreds of students participate in various acts in iNite, ranging from Namaste to Urban Dance to Poi performances. While these students perform onstage, the team of iNite coordinators run another show backstage.

The iNite coordinators have a variety of jobs, including stage managers, Maanya Shanker, Sruthi Sankararamen, and Sid Ram, who help acts get on and off stage during the performances, runners, who get acts and bring them backstage, MCs, who introduce acts for the show, and spotlights, who operate the spotlights on stage.

Students became involved in iNite coordination for various reasons. Junior Maanya Shankar joined the iNite coordinators because she had to drop some of her acts.

“I still wanted to help out with iNite so I decided to become a stage manager. [It was a pretty easy process to get involved, as] I just filled out a form on Facebook that said asked why I think I’m qualified and what position I wanted,” Shankar said.

Senior Marvin Fu, who works with the iNite coordinators by operating spotlights, joined because he felt that the job suited his interests.

”I started working backstage for iNite last year when I saw that they were looking for people to work the spotlights,” Fu said. “I had some experience working with them, and I wanted to watch the show.”

Senior Rohan Venkat, who similarly joined the coordinators team as a way to view the show, was a runner for the show.

“I gather[ed] everyone from the next performance and another runner would take them to where they are supposed to go,” Venkat said. “I would make sure that everyone was with their group, another runner would bring them downstairs to the dressing room area, and then they would be taken backstage.”

The show also had several emcees who introduced acts and entertained the audience during transitions. Senior Manas Elaprolu, an emcee for iNite this year, said his motivation for joining the iNite coordinator group was that it would be cool to try to make an audience of 2000 people laugh.

“I thought that it’d be fun, so when Namaste held auditions for MCs in the beginning of this year, I thought ‘You know, why not,’ and I gave it a shot,” said Elaprolu. “It ended up working out.”

“We’d put [the performers] in a hallway, and another runner will come and lead them from the hallway. This way, we can put about three acts on deck beforehand, totaling at four acts going on [or getting prepared] at the same time,” Shankar said.

Throughout iNite, streamlined coordination between the iNite coordinators was imperative in order to keep the show running smoothly.

“A successful iNite takes a lot of coordination from everyone backstage, the people at George Mason working behind the scenes to get everything running, and all of the performers,” Fu said. “The iNite coordinators work with George Mason people to make sure everything is going smoothly, and stage managers keep everyone on safe, organized, and in check.”

Due to the team being a small size, it was necessary for a lot of organization and clear division of work.

“It takes a lot of organization, being on your toes and making sure that you know where everyone is at all times [for a successful iNite]. Knowing what to do at what time also requires us to be very organized,” Shankar said.

The team encountered several setbacks and challenges while guiding student performers during the show.

“It was honestly kind of stressful because there was a lot of running up and down; we had to run up and down like two flights of stairs every single time we wanted to get an act, and people would go anywhere they wanted, whether it be outside in another room just in the hallways,” Shankar said. “Another challenge was people not listening. We’d tell them to go backstage or go somewhere else and they just would just stand there and not do anything.”

However, the coordinators found workarounds to these obstacles as the night progressed, resulting in a smoothly run show overall.

“We set people to go check and make sure if people were there, or we would text them and be like ‘Hey are they there already early?’ or like ‘Hey, can you come cover for me right now?’,” Shankar said. “At the end of the day like we got the job done and it was fun, but it was really stressful, I would say.”

The coordinators agree that running the backstage show was a valuable and overall successful experience.

“Many people just want to be in the audience or perform, so the backstage part of iNite can get overlooked,” Venkat said. “This show overall went smoothly, as there were not any mess-ups on our part at least. I think we got everyone where they were supposed to go.”