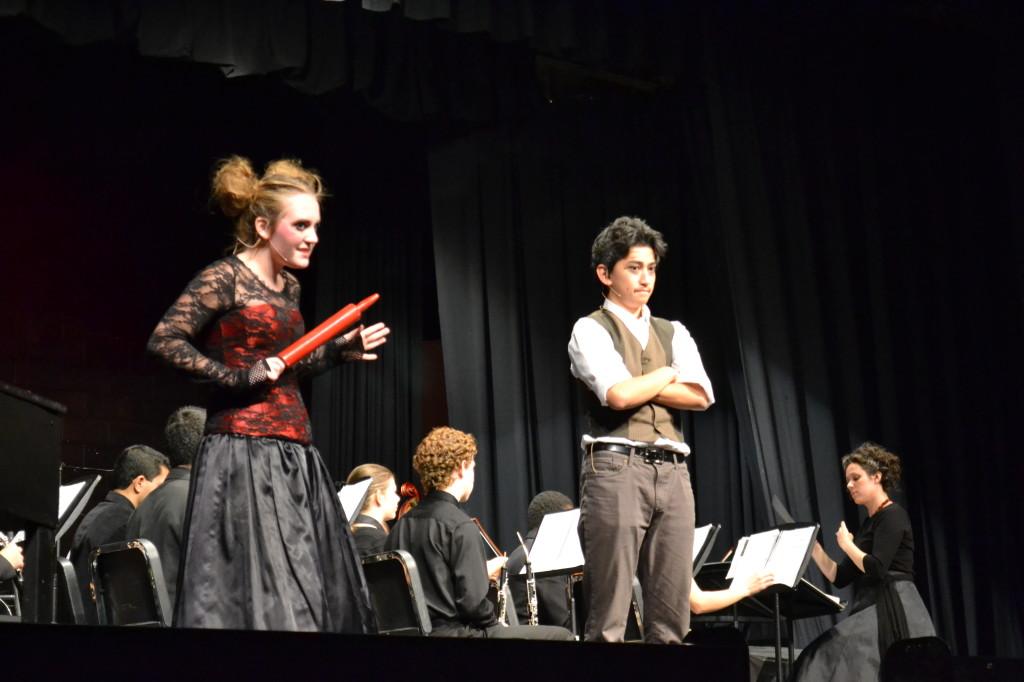 Emoting a piercing screech as he dragged a sharp razor across his victim’s throat, Sweeney Todd executed yet another customer in his mad tirade for revenge, and sent them off to be cooked into one of Mrs. Lovett’s famous meat pies. So went TJ Choir’s production of the school edition of “Sweeney Todd: The Demon Barber of Fleet Street,” on Dec. 7 and 8.

TJ Choir’s version of Sweeney Todd had several notable changes and differences from other productions of the musical. By focusing primarily on vocals rather than acting or stage directions, there were minimal scene changes, and elevated platforms were used throughout the show. Additionally, the production featured several faculty and staff, including English teachers Judy Bello and Jill Burdick-Zupancic as members of the ensemble and Principal Evan Glazer as one of Todd’s victims. The orchestra sat in the center of the stage, rather than in its usual pit.

In the lead role of Sweeney Todd, sophomore Adam Goldstein drove the performance from the very moment he stepped onto the stage. His dark portrayal of the morose and vengeful barber, voiced with a strong baritone voice, drove chills up the audience’s spines, particularly in “Epiphany.” Additionally, Goldstein channeled the emotional layers of Todd with ease, particularly in “Final Scene,” when he realized the terrible atrocity he committed by murdering the old beggar woman.

Senior Julia Ruth was fearless in the role of Mrs. Lovett, the woman who sells meat pies below Todd’s barber shop and is creepily infatuated with him, and added charisma and humor to the stage. Her out-of-the-box acting was notable, but it was her vocals and mastery of the variety of ranges and pitches that made her rendition of her character impeccable.

Junior Hannah Pho charmed the audience with her pure and operatic voice as Todd’s unfortunate daughter, Johanna. Sophomore Ben Parsell was delightful as Tobias Ragg, and had a phenomenal performance in transitioning from the humble servant to a delusional maniac. Freshman Nova Zhang was haunting as the Beggar Woman and consistently portrayed the crazed character, while freshman Tyler Larkworthy depicted the smitten Anthony realistically.

While there were some microphone issues that drew away from the singers at times, most aspects of the show were fluid, and the cast adjusted accordingly. The ensemble was particularly excellent with their emotions and staying in character, while make-up on all the performers enhanced the chilling effect of the show.

“The overall experience was really great,” Larkworthy said. “It was a lot of fun to be able to perform with such talented singers and to bring the show to life in front of so many people.”