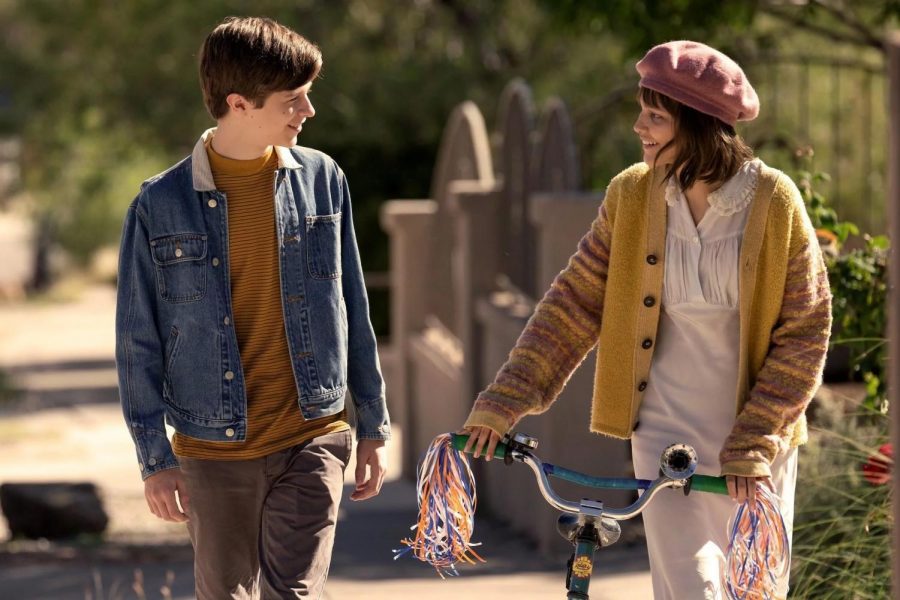 Stargirl. Disney+ released this indie film on May 11, 2020, and it was the perfect thing to brighten up this unexpected break.

The movie is set in the small town of Mica, Arizona, a town where, according to protagonist Leo Borlock (Graham Verchere), “nothing ever happens.” The sleepy setting of the local high school is completely turned upside down by the arrival of new girl Stargirl Caraway (Grace VanderWaal), whose quirky style and habits make her the talk of the school. Stargirl makes countless changes to the way the school works, and Leo finds himself drawn to her. But when her true identity comes into question, friendships and relationships will be tested.

Familiar faces in the cast include Karan Brar, former Disney Channel actor, as Leo’s best friend Kevin, and Grace VanderWaal, who won Season 11 of America’s Got Talent, as the eponymous character. Stargirl incorporates VanderWaal’s real singing and instrumental talent in her debut film, featuring her strumming the ukulele and singing in various scenes throughout the movie. Showcasing VanderWaal’s talent, in my opinion, was a good move by the Stargirl team because it allowed her to play it safe and stick to her established talents during her first film. Additionally, some musical scenes were shot like music videos, with VanderWaal singing directly to the camera, further playing to the actress’ strengths.

The directing and videography also is a main contributor to the movie’s style success. Director Julia Hart uses good natural lighting throughout the movie to give a warm, nostalgic tone. I loved how it gives more mellow notes to each of the scenes, further reinforcing the small-town feel of the movie. In addition, the picturesque desert landscapes are aesthetically pleasing and the warm, bright colors add a touch of whimsy to the scene set in those places. I also personally enjoyed the soundtrack, which features soft rock from the 60s to the 80s and original songs by VanderWaal. I’m a fan of soft rock and pop, so the acoustics of the music were really relaxing and made the movie much better for me.

Plotwise, the movie was less pleasing. There is little explanation given as to why Stargirl liked Leo, only for how Leo liked Stargirl. There is equally little development of Leo’s friend group (Kevin, Tess, and Benny) and oftentimes these entertaining and dynamic side characters add extra depth to the movie. This is not the case in Stargirl. However, we do see some LGBTQ+ representation from Tess’ character, and it was nice to see society evolving in this way onscreen. The school’s social ladder is also less rigid than that of stereotypical high school movies. There are no nerds featured as losers, and the structure is more fluid– by the end, anyone could sit anywhere and be friends with anyone.

The way Stargirl tackles themes of identity, friendship, and peer pressure is a bit overused, with one character coming in to save the day and change everything, but I do think it drives home the main message: be true to yourself and your friends. Overall, this is a happy, aesthetically pleasing movie, and the plot annoyances can be ignored to enjoy the movie on the whole.