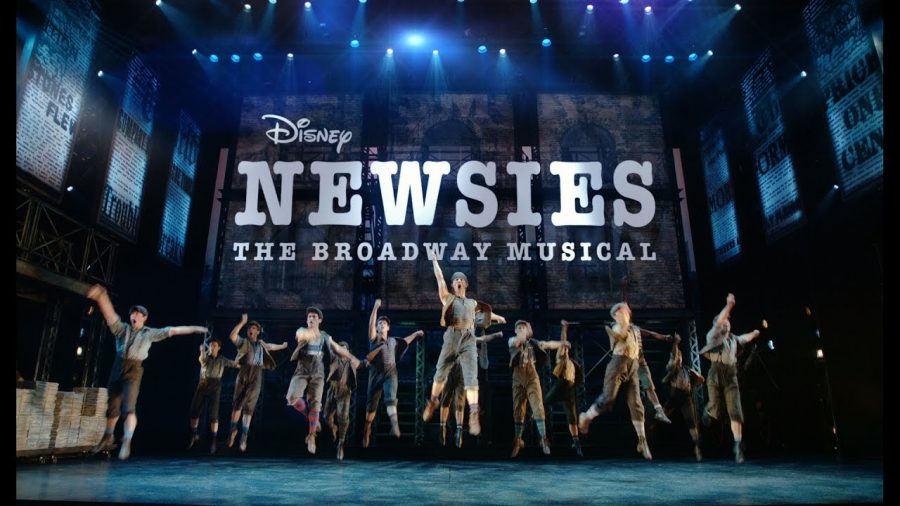 The Disney’s Newsies: The Broadway Musical cast jumps during the live recorded performance of Newsies. The Broadway musical itself won two Tony awards and toured nationwide. The musical was filmed live and came to limited theaters across the US, as well as being available on DVD and Disney+.

Twenty years after the original movie, Disney’s Newsies made a comeback on an entirely different stage: Broadway. In 2012, a Newsies musical based on the movie debuted on Broadway. 5 years later, the musical was recorded live at Pantages Theatre for viewing in movie theaters or in the comfort of home.

In both Newsies, which is set in 1899, newsboy and orphan Jack Kelly (Jeremy Jordan), along with his new friend David Jacobs (Ben Fankhauser), finds himself leading a New York strike against Joseph Pulitzer (Steve Blanchard), who begins overcharging newsboys per paper. As we soon learn, all Jack truly wants is to escape this big city reality for the alluring Santa Fe. The Newsies Broadway Musical Movie inhabits the same spirit as the original with high energy dance numbers bordering on gymnastic, the unbearable cheesiness of any Disney movie, and of course, the lovable characters who keep your interest despite it all.

I will admit, by watching this movie on my laptop I lacked an important factor. The elaborate dance numbers and the large sets failed to impress me when they were only 7 inches on the screen. This review relies on plot and music alone.

When I sat down to watch the recorded Newsies Broadway Musical Movie, I did not brace myself for amazement. I expected a more abstract backdrop from the original or a slightly different musical number at most. I did not expect to fall in love with a new character or be shocked by a different twist. Why would I? I had already seen the original.

Then they introduced Katherine (Kara Lindsay). Kara Lindsay was the perfect actress for this vivid character. At first she seemed like a simple girl for Jack to flirt with, but then we got to know an aspiring reporter eager to write this story but repressed by the limitations of being a female journalist before the turn of the 20th century. Katherine made a far more captivating love interest for Jack than that of the original, David’s sister Sarah Jacobs.

Unfortunately, by the end, I was missing Sarah. The anxious but passionate journalist we met through the number “Watch What Happens” had disappeared by the end. She became a plot device (a reason for Jack to stay in New York), and lost all charm.

Another difference from the original was David’s role in the story. In Newsies, David was by Jack’s side throughout the protests. He went from a new newsboy to a trusted friend, but that happened as they grew closer gradually. When Jack visited David’s family for dinner, they became friends beyond their work as newsies. When that endearing scene was scrapped, an entire relationship, key to the plot, vanished.

Jack’s motivations also remain unclear throughout the musical. Jack is skilled in drawing and painting; he creates backdrops for Medda Larkson (Aisha de Haas), who runs a theatre. However, this skill adds little to the plot.

More importantly, Jack makes it clear that he wants to leave New York for Santa Fe from the first scene. He says to Crutchie (Andrew Keenan-Bolger), his good friend who has a disabled leg, “you keep your small life in the big city and give me a big life in a small town”. That central dream makes Jack a relatable character to the audience, but seemed like an empty dream unenforced by reasoning.  Without the demonstration of Jack’s wish for a family from the dinner scene with David, Jack’s dreams of escaping to Santa Fe lose relatability and sense. In the original, we could see that Jack wished he had a family or a reason to stay in New York, but in the musical it is played off as simple bitterness.

This remake also seeks to include more modern humor for a modern audience. The “uncomfortable” humor which we are all accustomed to is peppered in for a laugh. Amidst late 1800’s slang, these subtle jokes stick out like a sore thumb.

So, it was the second act which disappointed me. Characters went flatline and succumbed to a cheesy plotline. However, I didn’t hate it. I admire a remake not identical to the original. The creators did not attempt to remake the movie exactly. The Broadway musical movie boasts its own additional songs and an entirely new character, but clung to the overall flavor: a feel good movie which inspires you to protest for what you believe in.